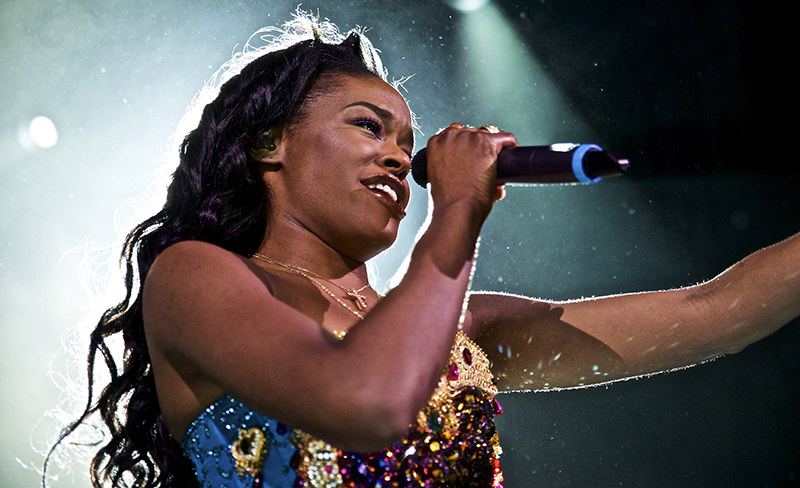 In this May 11, 2015 file photo, Azealia Banks performs in concert at Irving Plaza in New York. Banks, like Donald Trump, is outspoken and often criticized for her opinions (AP Photo)
by French Press Agency - AFP
May 16, 2016 12:00 am

Rapper Azealia Banks has apologized for a stream of racist and Islamophobic invective against former One Direction heartthrob Zayn Malik that led Twitter to suspend her.

Banks, who has long been notorious for provocative social media postings and has rarely voiced remorse, offered her "sincerest apologies to the world" in a posting on Instagram, where her account remains active.

"Employing racial/sexual slurs/stereotypes in attempts to make fun of or degrade another person or group is not fair or fun for anyone," wrote Banks, who performed Sunday in Istanbul.

"Allowing my anger to get the best of me, I've managed to insult millions of people without reason. And for that I give my deepest apologies," she wrote late Saturday.

Banks, who is African American, used a series of epithets targeting Muslims in a rant on Twitter late Tuesday against Zayn, whom she accused of copying her style in his new racy look after One Direction.

Banks on one point gloated that the US military would kill the family of Zayn, a Briton who is partially of Pakistani descent and is one of the most high-profile Muslims in Western pop culture.

Banks initially defended herself, suggesting that she was singled out as an African American woman and saying she was upset that Zayn -- who has gone only by his first name since leaving the boy band -- refused to engage with her over her criticism.

Banks, who did not mention Zayn by name in her apology, also clarified one point from her insults -- she had no problem with curry, one of the terms she used to berate him.

She said she was repeating a joke from her native New York -- where nearly half of cab drivers were born in Bangladesh, India or Pakistan -- that taxis smelled like curry.

"I feel compelled to clear the air with curry itself because that's a bridge I don't want to burn. I still want to be able to enjoy it freely without guilt or judgment," she wrote.

Banks has previously used homophobic language and called for the burning down of buildings owned by descendants of slave traders, remarks that drew controversy but did not lead to her suspension from Twitter.

She has also raised eyebrows by supporting Republican presidential candidate Donald Trump, a fellow enthusiast of acerbic Twitter postings who has little support among minorities.