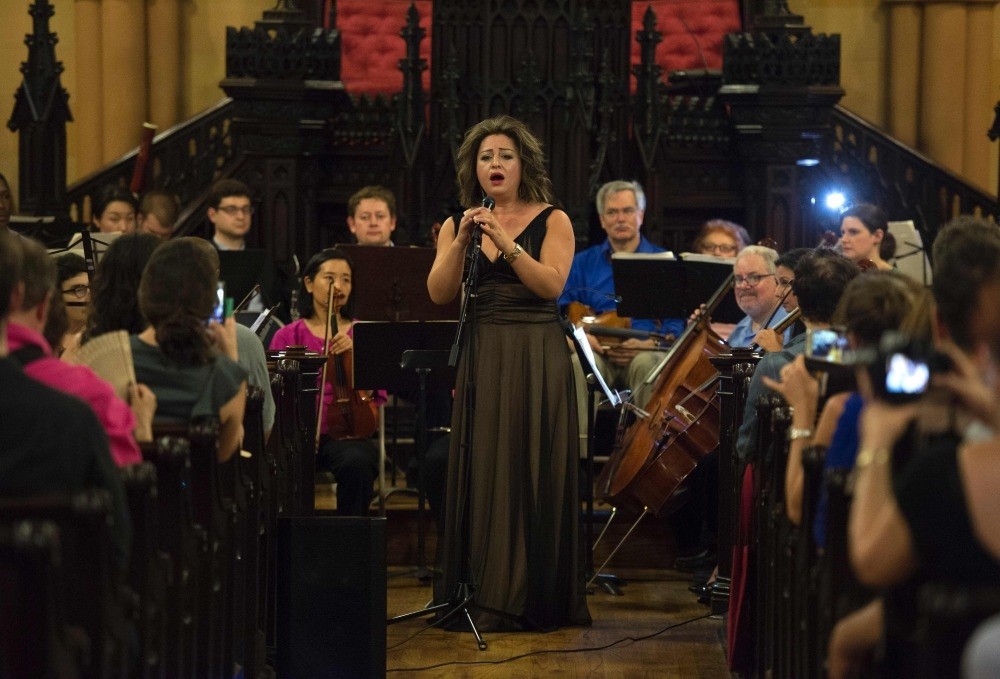 Soprano Quntar, who fled from Syria five years ago, gave a special concert on World Refugee Day to highlight the cultural contributions made by those who have fled war.
by French Press Agency - AFP Jun 22, 2016 12:00 am

When Syrian soprano Lubana al-Quntar takes the stage and sings beautiful arias, few might believe she is a Syrian refugee living in the U.S. Having fled her country five months after the civil war broke out, Quntar aims to show that refugees bring new color to the culture of host countries

Performing Puccini to a rapt New York audience, her soprano voice soaring to the rafters, Lubana al-Quntar may be the last person most Americans would think to be a Syrian refugee. But half-an-hour's drive from Donald Trump's campaign headquarters, she and dozens of other classically trained refugees gave a special concert at the close of World Refugee Day to highlight the cultural contributions made by those who have fled war and persecution abroad.

Just days after the billionaire presidential candidate repeated his call to stop Syrian refugees entering America, Quntar had the audience spellbound even if many of the church pews were empty.

She sang the aria "Sola, perduta, abbandonata" from the opera "Manon Lescaut," accompanied by an orchestra of refugee American musicians, followed by a haunting Syrian song called "Ya Ghazali."

"This time I feel every word that I sing - abandoned and alone. It's so incredible," she said before the concert in a Brooklyn church held to raise money and awareness for refugee causes.

"It's great to let the whole world see what refugees look like. They have a dream, they have talent," she added, the picture of glamor with coiffed hair before changing into a plunging evening gown.

Quntar has been in the United States for five years after leaving Syria five months into its conflict. She lives in Washington D.C, where she would return by a grueling five-hour bus journey after the concert.

She comes from Suwayda, the Druze stronghold south of Damascus, where Quntar says her soul remains.

Even for a professional musician who studied in Europe and performed abroad before the war, it has been tough adapting to a new life.

"I had to start life from a zero point," she said. "It's a constant struggle, like every day, especially my heart and my mind are always with my family and my people."

The United Nations said Monday that the number of people fleeing their homes has spiked to 65 million in the worst refugee crisis since World War II, led by Syrians, Afghans and Palestinians.

Nevertheless, America is in the throes of a toxic debate about immigration in general and Syrian refugees in particular, with Trump and other Republicans calling for immigration to be halted from countries with links to terror attacks targeting the United States or its allies.

"It's sad," Quntar said. "For me as an artist, as a musician, I cannot understand how can you hate somebody."

The concert was the brainchild of U.S. conductor Lidiya Yankovskaya, who gathered together the Refugee Orchestra Project after witnessing firsthand Germany's response to the crisis last summer.

"The thing that really impressed me was how many people were welcoming of the refugees," she said. "When I came back to the States, I found unfortunately this was not always the case."

The orchestra brings together musicians who are refugees or whose friends and families fled violence and persecution.

Yankovskaya herself was a refugee as a nine-year-old from St Petersburg, Russia when she moved to upstate New York with her family.

"I'm hoping that our viewers and our listeners will realize how much talent and intellect and how many inspiring people come to this country as refugees... and how much their contribute to our lives."

The concert included work by Sergei Rachmaninoff, who fled the 1917 Russian Revolution and Irving Berlin, the great American songwriter whose family emigrated from Russia in the 19th century. Donations raised at the concert will go to organizations such as the Hebrew Immigrant Aid Society (HIAS), which resettles refugees from all backgrounds. Merrill Zack, one of the group's staff, says although America has provided refuge to people fleeing persecution for centuries, backlashes come and ago. Thousands of Jewish refugees were turned away before World War II, she says. "So is it a pattern? I don't know. Is it something that we have seen in history? Yes. Do we ask our country to continue its leadership of welcoming refugees? Absolutely."
RELATED TOPICS