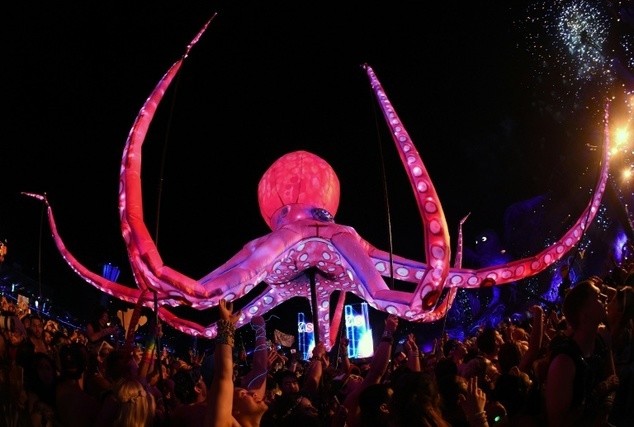 by French Press Agency - AFP Aug 29, 2016 12:00 am
A premier electronic music festival promoter is expanding to India, seeing a major new market in the billion-plus country, once off the radar for Western concert promoters.

The Electric Daisy Carnival (EDC), who throw a giant flagship party each year in Las Vegas, announced an inaugural Indian party in New Delhi on Nov. 12 and 13.

Electronic dance music (EDM) has swept Western youth culture over the past two decades, and has quickly made inroads in India as internet streaming and downloading facilitates the breaking down of musical borders.

"We see India as an exciting market to build a unique and special festival. With a population of 1.2 billion people, half of whom are under 26, connected through smartphones, the potential is incredible," said Pasquale Rotella, the founder and CEO of Insomniac, the Los Angeles-based parent company for the EDC. He told AFP by email, "While there is a nice foundation of dance music fans in India, there is still room for a ton of growth."

Only a decade before, India was off the touring map for Western artists except for a few mega-stars, with domestic musicians overwhelmingly dominating the market and logistical bottlenecks inhibiting tours.

But in recent years, leading Western DJs have regularly played in India and the country has a well-received homegrown annual electronic festival, Sunburn, which takes place in the western beach state of Goa at the end of the year.

The Indian capital has traditionally been considered less of an entertainment destination than the western metropolis of Mumbai, while Goa is the hub of the electronic scene.

Rotella, who says he was fascinated by India since childhood, described Delhi as a "very vibrant, alive city," and he believes the availability of open space made it ideal for a festival.

Rotella said the festival, the details for which have yet to be announced, would include international as well as local acts and incorporate Indian culture, creating a new event that "integrates everything beautiful that India has to offer."

Electric Daisy Carnival - which has a partnership with concert giant Live Nation - has has established international festivals in Brazil, Britain and Mexico, as well as in other U.S. cities, including New York.

The most recent EDC festival in Las Vegas drew more than 400,000 people over three days in June, making it one of the world's largest music events.

Tomorrowland, arguably the best-known electronic music festival, takes place each year in Belgium, and for the second year was last month in livestreamed to a simultaneous party in Hyderabad, India.

Another top U.S. EDM festival, Ultra, takes place in Miami, and has also held a number of international festivals, in Bali, Seoul, Singapore and Tokyo.

India is not the only emerging player on the EDM scene. This year, the Storm Electronic Festival in China expanded from two to six cities.

Rotella started throwing underground raves in Los Angeles in the early '90s, and said that dance music had a unique global appeal thanks to the rhythms and lack of extensive lyrics.

"Dance music has no language barriers to get in the way of reaching the souls of its listeners."
RELATED TOPICS