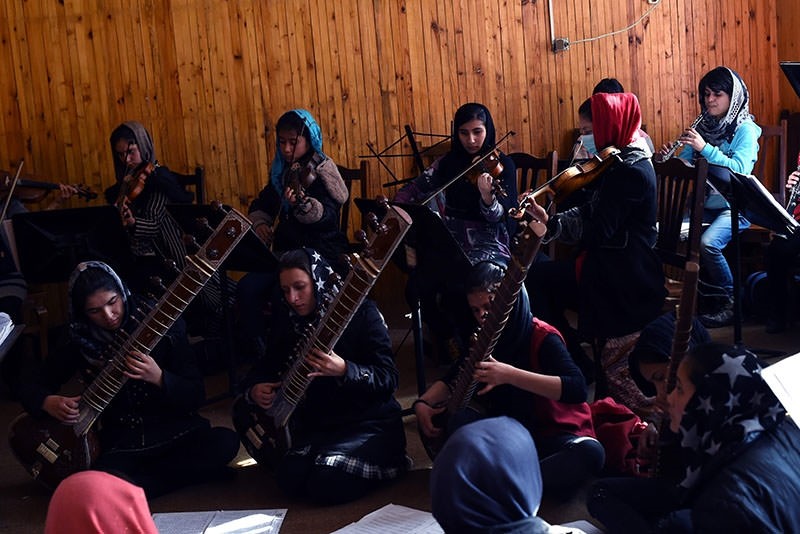 In this photograph taken on January 8, 2017, Afghan music students play during a rehearsal at The Afghanistan National Institute of Music in Kabul. (AFP Photo)
by Jan 19, 2017 12:00 am

Teenager Negin Khapalwak is the first ever female conductor of an only all-girl orchestra in Afghanistan. On Friday, her group is due to play the closing concert at the World Economic Forum in Davos.

In a small, wood-paneled room in the west of Kabul, a young girl in jeans asks for quiet, then raises her hands. Instruments start to play, little by little, picking up tempo as the notes start to mingle.

The group of 40 - known as Zohra - is Afghanistan's first all-girl orchestra and it's led by Negin Khapalwak, a 19-year-old woman from the restive eastern Kunar province. So far, this small room was their world.

But the young women are about to step out in grand style, playing on Friday at the closing concert of the World Economic Forum in Davos, Switzerland, in front of world leaders.

The concert will be the first time Zohra plays outside Afghanistan. During the tour, the group will then move on from Davos to Zurich and Geneva, then Berlin and Weimar in Germany.

Zohra is part of Afghanistan's only professional music academy. The group itself was the idea of a young female student, who one day approached it's the school's director Ahmad Naser Sarmast and suggested it. But this deeply conservative and religious country frowns upon girls in the public sphere, let alone playing music.

However, Sarmast has always been a champion of women's rights, he says, so he started to help bring the group together.

Sarmast, who in Afghanistan is also sometimes called "the savior of Afghan music," did not even give up his unconventional school when he was seriously injured during a suicide attack in 2014 at a venue where his students were playing.

There have been sacrifices for the orchestra's members too. Zohra's young and self-confident conductor, Negin, who comes from a very conservative community, had to cut all ties with extended family, who at times have threatened to kill her.

"Girls have always been threatened, beaten, and told to stay home, but I will not stop," Negin says.

She says she chose to become a musician because she never saw a girl musician before and decided to show in Afghanistan "girls could do everything."

"Even my uncles threatened me, but I am not going to stop," Negin says smiling. She wants to introduce "real Afghan music to the world so it can see and understand our cultural and folklore music."

In Afghanistan, the girls play mainly on campus, because no public venue is safe enough for the group. The orchestra members complain of being mocked, even threatened, when carrying their instruments outside the school.

Negin says one day she hopes she can teach her society to understand her passion. Once they understand, she says, "there will no longer be an issue."