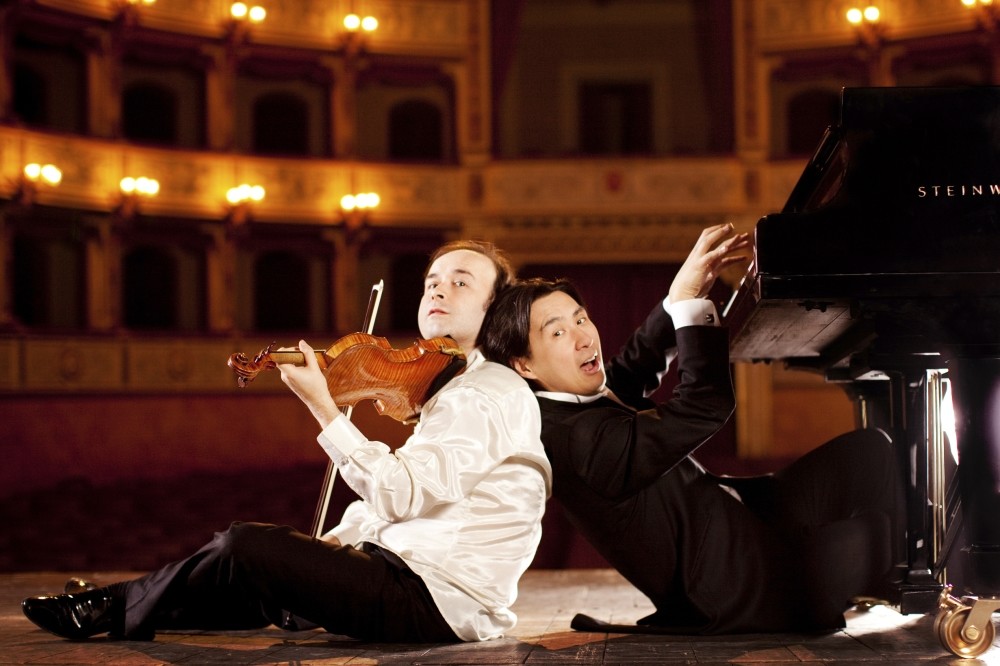 The duo includes the audience in the show and performs concerts full of laughter.
by Zeynep Esra İstanbullu Sep 14, 2017 12:00 am

Having taken the world by storm with their unique and comedic theatrical performances, classical musicians Aleksey Igudesman and Hyung-ki Joo are ready for a concert to be held at the Hagia Eirene tomorrow

The Turkcell Platinum Istanbul Night Flight concerts will be held between Sept. 15 and Oct. 29 this year and the first concert of the series, given by the world famous duo Igudesman & Joo, who have made a breakthrough with their shows which bring audience members a fusion of music and comedy, will take the stage at Hagia Eirene on the night of Sept. 15.

The duo has broken records in terms of online viewers, with more than 35 million views on Youtube to this day.

Incorporating a little bit of magic in their shows, Aleksey Igudesman & Hyung-ki Joo will include everybody into the show and perform a concert full of laughter.

Hyung-ki Joo will give a beautiful concert performing on a Steinway & Sons piano, one of the best piano brands in the entire world since 1853. His unique musical concert, organized at Hagia Eirene, will be held in the first yard of the Topkapı Palace. The perfect sound of the piano under the virtuosity of Joo will attract all listeners in the historical atmosphere of Hagia Eirene. On the eve of tomorrow's upcoming performance, Daily Sabah conducted an interview with the duo on their inspiration and aims.

DAILY SABAH: As two separate classical musicians, how did your paths cross and how did you decide to form a duo?

IGUDESMAN & JOO: We met at the Yehudi Menuhin School and it was hate at first sight for the first year, as a matter of fact. Aleksey was constantly beating Hyung-ki up. It was only after a year of suffering bruises that Hyung-ki offered Aleksey some fish and chips and Aleksey could not resist the opportunity for a bite to eat. Since then, we've become friends and partners, especially in food and music. If we were not involved in music, theater, the stage, composition and writing - quite unimaginable feats for us - we would probably both be cooks in a sushi restaurant in Kyoto.

We have always been very close to theater, cinema and acting. As a teenager, Aleksey went through a phase where he read all the works of Bernard Shaw, Oscar Wilde and Anton Chekhov. We have both completed many projects on and off stage, written music for the stage and the screen, and acted in shows and plays. So, we were far from new in terms of the field. People who trusted us with our first show, already knew what we are capable of. Interestingly enough, our first performance was in one of the most prestigious venues in the world, the Musikverein in Vienna.

D.S.: You make a unique stage performance that blends classical music with funny shows. How would you describe your motivation and your unique style?

I & J: For us, there has never been any distinction between "serious" and "fun." We have fun seriously and we try to have fun being serious. Back at the Yehudi Menuhin School in England, where we met at the age of 12, we were always listening to and watching great comedians, in tandem with other great performers. We were influenced by people who were wonderful musicians and had a great sense of humor, such as Victor Borge, Dudley Moore and even Glenn Gould, who did some sketches for Canadian TV, which many people don't know.

Even the great violinist Yehudi Menuhin himself, who Aleksey was lucky enough to have lessons with, spread the word of being open to all things and not just "classical music" itself. However, we have also been influenced by various types of nonclassical music, like Frank Zappa, Queen, The Beatles, Pink Floyd and Billy Joel, who Hyung-ki has worked closely with for many years.

D.S.: Where do you get your inspiration?

I & J: We are each other's muses. However, we draw inspiration from anything and everything that has happened since the beginning of time, be it Mozart, Marmalade or Madagascar.

An idea often comes to us rather quickly and we make sure that we write it down immediately. Sometimes, this idea will fester for years before we dig it up. After the initial idea is established, it is a long process of trying things out and improvising with regard to our ideas. We sometimes film ourselves while doing that. During filming, a lot of other crazy stuff happens. Then, we try to put it into form and into a shape, trying to notate it as precisely as possible, after which another elimination process starts. We cut sections, improve them and move them around. In no case would we write a piece or a sketch and it is done. To the contrary, we improve our pieces through performances and rehearsals, even over the course of many years. To sum it up, some ideas we throw on stage immediately and improve during live performances, since we do love to improvise. However, other pieces require years before we can actually do them in concert.

D.S.: How do critics and the audience around the world react to your work as it is quite extraordinary?

We have been very blessed with good critics from the press and a positive response from the public; especially from great musicians. Whether or not things will stay this way remains to be seen. The public is understandably enthusiastic: The regular concert breaks out of its routine and goes off in a new, fresher direction, with humor and music that we hope will be fun and original and of high quality.

From a professional standpoint, we have gotten wonderful feedback so far, even from great artists such as Julian Rachlin, Janine Jansen, Mischa Maisky, Emanuel Ax and Gidon Kremer, all of whom we have had the great pleasure of performing with and including in various, comedic ways in our performances. With Gidon Kremer and the Kremerata Baltica, we even launched a joint project titled, "Being Gidon Kremer," which has gone on tour extensively in recent years.

D.S: Can we say that your aim is to make classical music more popular and more widely appreciated?

The masterpieces of great composers are important and require deep respect. We never laugh at the music, we laugh with the music and at the music establishment. We also laugh about how serious we all take ourselves. However, music is still number one for us - and believe me - Mozart liked a good joke. Brahms not so much, but Mozart did.

From a young age and onward, we felt that the entire business and the ceremony surrounding classical music was much too serious for its own good. We also discovered that people are afraid of going to concerts. Some of our aim is to dispel this fear by making classical music more accessible to the public. We always try to write on various musical levels. We do this so that in a single moment, an 8-year-old will have something to laugh about while a classical music connoisseur and someone who has never heard a single note of classical music may also enjoy and appreciate the show in their own way.

D.S.: Do you mix local genres with classical music in your performances? Should we expect a Turkish folk music or arabesque piece to be mixed on the Istanbul stage?

We want to surprise everyone but have you seen our Youtube video in which we play Mozart's Turkish March, "Rondo alla Turca?" Our show is an international show and uses little language. Whatever language might be used, it is secondary to the presentation. It is not important to understand the humor of a sketch, however, we do our very best to adapt those bits of language into the local language, wherever and whenever possible. We have managed to perform the show in French, German, Italian, Spanish, Russian and even Korean, having used phrases and sentences in Japanese, Malaysian, Mandarin and Cantonese as well. For us, what is wonderful about this is seeing the various ways people from all parts of the world react to different parts of our show. Humor is the same everywhere but every culture has its own "preferences." For instance, some nations laugh more about slapstick humor while others prefer musical or linguistic jokes.