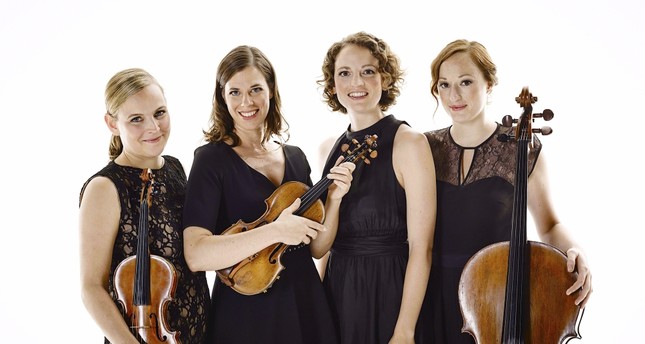 Salut Salon, an all-female chamber music quartet from Germany, will be performing for the first time in Turkey at Hagia Irene tomorrow, Oct. 28, as part of the Turkcell Platinum Istanbul Night Flight Concert Series.

Founded in 2002, Salut Salon redefines conventional chamber music concerts, which traditionally feature two violinists, a cellist and a pianist. They have been called "the Harlem Globetrotters of string quartets" for the twists, turns and humor they weave into their performances. With Angelika Bachmann and Iris Siegfried on violin, Anne-Monika von Twardowski on piano and Sonja Lena Schmid on cello, the quartet knows how to seduce their audience with passionate virtuosity, instrumental acrobatics, charm and a great sense of fun.

Daily Sabah conducted an interview with the quartet to learn more about their style, compositions and upcoming concerts in Istanbul.

Daily Sabah: While you were growing up, did you all always want to become musicians? Can you tell about the moment you realized that you could really make music together and be a band?

Angelika Bachmann: Iris and I have known each other for 34 years, since our school orchestra in Hamburg. Even back then, we had the same sense of humor and drove our conductors crazy with our laughing fits. Later on, we started a monthly "Jour Fixe," an art salon where we met up with friends, actors, musicians and writers. Anyone who wished to could contribute. We initially played as a duo, then as a quartet with cello and piano. We never dreamed that we would one day be playing 120 concerts a year all around the world.

D.S.: When was your first performance as a quartet, and how was it?

Angelika Bachmann and Iris Siegfried: As with many famous quartets, Salut Salon began as a duet. We played together in the school orchestra when we were children. In 2008, we were joined by Anne von Twardowski on the grand piano and Sonja Lena Schmidt on cello. We did not set up the quartet more than 10 years ago because we wanted to make a career with it, but we always said we do it as long as we enjoy it. We blend whatever genres can possibly be combined with our beloved classical music: Tango, chansons, folk music and theme songs from movie soundtracks.

D.S.: How did you decide on your name? What other names were you considering?

A. B. & I. S.: We simply love the concept behind "salon" because it suits us. In the salons of the 1920s, you could perform anything you wanted — the music didn't have to be purely classical. Also, women played an important role from the very beginning. In the intellectual salon in 18th century France, for instance, there was an ongoing debate about the revolution, whereas the salon of 19th century Germany was more oriented towards artistic and musical concerts, and politics were not at all "the done thing" — the hosts of the salon were always women. Things are no different with Salut Salon. And the little matter of a personal invitation? It all depends on your point of view. In any case, the four musicians from Hamburg always enjoy the company of precisely those people who happen to turn up at their concerts. The secret is this: The best company is always those who happen to be in the right place at the right time.

D.S.: What can fans expect from attending one of your live shows?

A. B.: With our combination of classic, Tango Nuevo, our own chansons, film scores, folk music, puppet shows and instrumental acrobatics, we are rather unique in terms of the classical concert scene. There are probably as many different expectations as there are listeners. On the one hand, there are people who have never been to a classical concert who suddenly realize that classical music is not as intimidating as previously thought. These audience members are often amazed that they have not only managed to stay awake but that they actually were not bored during the performance! However, there are also many people in the audience who feel at home in the world of classical music that are just as surprised by our music as other audience members. Audiences are usually unaware that we compose our own arrangements and, during our performances, they suddenly discover something completely new in something so familiar.

D.S.: You have quite a different repertoire in the classical music world. Who are your heroes?

A. B.: Astor Piazzolla is one of them, and Camille Saint-Saens is another. These two names are, after all, the reviver of the Argentinean tango and the French "animal composer" respectively, who lent their names to an entire Salut Salon program titled, "Shark in the Aquarium," which came as no surprise because there is something of a soul connection. In their own times, Saint-Saens and Piazzolla were also known for their experimental tendencies. Saint-Saens even risked losing his strong reputation as a classical composer due to the extreme fear that his contemporaries would not understand his humor in "Zoological Fantasy," and he refused to have the work printed. The "Carnival of the Animals," from which Salut Salon plays "Aquarium," was not published until after Saint-Saens' death in 1910.

Today, it is his most well-known work. In the same way, Astor Piazzolla was also not loved by all after returning to Buenos Aires in the mid-1950s after having studied music in Paris, setting to work at reviving the Argentinian Tango. In the 1980s, by the way, Piazzolla took a young French accordion player named Richard Galliano into his orchestra, advising the young musician to do exactly what his professor in Paris had advised him to do 30 years earlier: Get in touch with his roots. Piazzolla told Galliano, "Create a musette neuve style, in the same way that I created the Tango Nuevo." Galliano heeded the advice of Piazzolla and, in 1991, he released a collection of live recordings performed with his quartet in a collection titled, "New Musette." In Salut Salon's program, the two great tango revivers from both this and that side of the pond meet again when "Resurreccion" meets "Tango pour Claude."

D.S.: You gave a concert at Hagia Irene previously. What do you think about the atmosphere of Istanbul? What are your thoughts about Turkish music?

We are looking forward to our concert in Turkey very much, as well as our performance at the Hagia Irene. I also look forward to the Turkish audience even more.

I. S.: In Istanbul, we will be performing our program titled, "A Carnival of Animals and Other Fantasies." Everyone who is familiar with the original "Carnival of Animals" from French composer Saint-Saens is in for a big surprise. Our quartet has invited other animals to the mix — animals like the snake Kaa from "Jungle Book," "Sheep may Safely Graze" composed by Johannes Sebastian Bach. From our favorite composer Piazzolla Saint-Saens, we feature the grand shark, "Escualo." Also, since we try to perform in the language of our host country, our Turkish audience will probably be laughing quite often.

Share on Facebook Share on Twitter
Previous in Music Enthusiastic rock and quiet jazz at the Istanbul Foundation for Culture... Next in Music A Saudi Arabian industrial zone plans to host a jazz festival around...
DAILY SABAH RECOMMENDS