'N Sync reunites to get star on Hollywood Walk of Fame 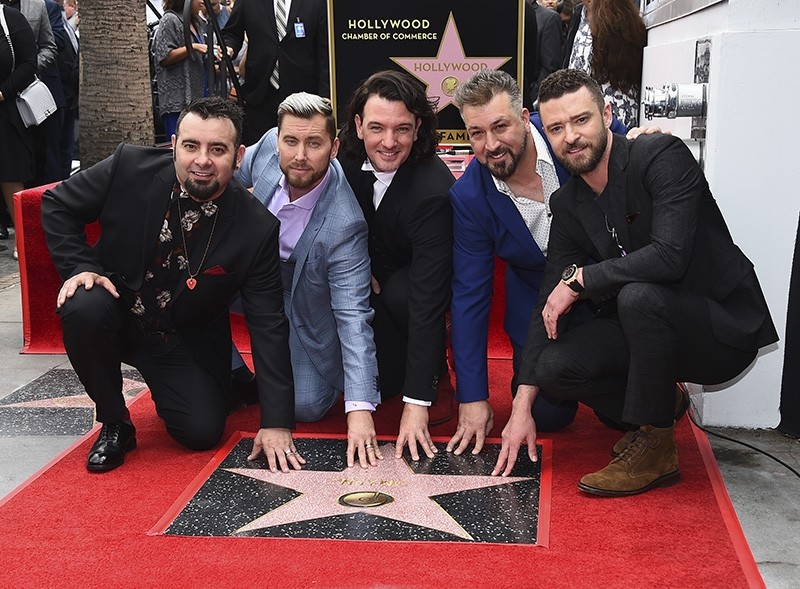 Chris Kirkpatrick, from left, Lance Bass, JC Chasez, Joey Fatone and Justin Timberlake of the band NSYNC appear at a ceremony honoring them with a star on the Hollywood Walk of Fame on April 30, 2018, in Los Angeles. (AP Photo)
by Associated Press May 01, 2018 12:00 am

There were thousands of screaming fans, songs and jokes — just like old times as 'N Sync reunited to get their star on the Hollywood Walk of Fame.

It was one of the largest crowds for a star unveiling as fans lined the block to catch a glimpse of Justin Timberlake, JC Chasez, Lance Bass, Joey Fatone and Chris Kirkpatrick as the famous fivesome received a star on the legendary boulevard on Monday. Fans occasionally broke into song as each member took the stage to thank their fans, families and one another.

"I don't really think I could put into words how much the four of you mean to me, just through hard times, through unbelievable times ... I just love all of you so much," said Timberlake.

That sparked an impromptu group hug as Timberlake joked: "Don't touch me!"

"Of course the band is made up of the cute one, the bad boy, the sensitive one, the sexy one and Joey," teased DeGeneres.

At one point the crowd began chanting Fatone's name as a show of support.

Fatone got in on the fun when it was his turn to speak.

"If it wasn't for you guys I wouldn't be where I am even today. So thank you guys. But you can also see me performing at Chuck E. Cheese next week. It's really good. It's a lot of fun," he joked.

Bass' speech was poignant as he addressed his LGBT fans and explained why he didn't come out publicly during the band's heyday in the late '90s and early 2000s, in part because he grew up deeply religious in Mississippi.

"I thought I'd never be able to tell anyone because not only was I terrified of the lasting rejection, I was certain that it would happen. But more than that, I didn't want to jeopardize the careers of these guys up here, much less the hundreds of amazing people who worked tirelessly to bring 'N Sync to the world," Bass said.

"But so many nights onstage I'd see young gay fans singing their hearts out and I wanted so badly to let you know I was you. I just didn't have the strength then. But I do today, and so let me say loud and proud to all my LGBT brothers and sisters who embraced me and showed me the way to be who I am, thank you so much," he added.

Timberlake is on tour in support of his new album, "Man of the Woods," released days before he headlined this year's Super Bowl halftime show.