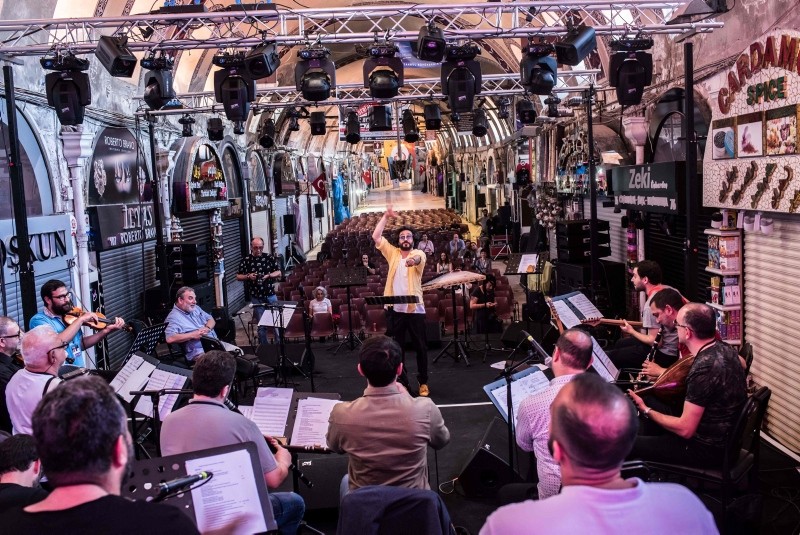 ,Melodies of Istanbul, orchestra perform during a rehearsal ahead of the 46th edition of Istanbul Music Festival at the Grand Bazaar, exceptionally open on a Sunday, during an interview with AFP on June 3, 2018 in Istanbul. (AFP Photo)
by Jul 09, 2018 12:00 am

It's an early summer evening at Istanbul's Grand Bazaar, the maze-like warren of alleyways crammed with shops that has been the city's trading hub for over half a millennium.

But this time, there are no traders' voices beckoning to travelers to come and haggle over the price of a carpet. Nor is the air filled with the pungent whiff of oriental spices being offered to passers-by.

As the evening light streams through the upper arch windows, it is music that resonates through the bazaar; oriental wind instruments like the Turkish ney and Armenian duduk, the lute-like oud and the Balkan accordion.

For the first time in its history as an epicenter of trade and commerce in Istanbul, the bazaar is being used for a concert in the prestigious annual summer Istanbul Music Festival run by the Istanbul Foundation for Culture and Arts (IKSV) -- the city's premier musical event since its creation in 1973.

It's a constant source of frustration to music lovers in Istanbul that the Turkish megapolis lacks a world-class, purpose-built music venue, especially for classical and traditional music.

But the festival uses the city's multicultural and multi-confessional heritage to make up for what it lacks in modern infrastructure, staging concerts in churches, synagogues, historic universities and now the Grand Bazaar.

"It is a very intelligent way to use this kind of historical space for concerts and bring in people for reasons other than their original function," said Kudsi Ergüner, a celebrated Turkish traditional musician and one of the great living exponents of the ney.

"Usually, people come here to buy things," he added, before dazzling the audience with his command of the long, flute-like instrument.

Despite the venue not being built for the purpose, he praised the acoustics of the Grand Bazaar, known in Turkish as the Kapalıçarşı, meaning Covered Market.

"The space is curved, there is a nice resonance and a very nice differentiation of sound," he added.

The Istanbul Music Festival, which focuses on classical music but includes high quality traditional music and jazz, has taken concerts to venues like the Neve Shalom Synagogue, the St Anthony Roman Catholic Church and even the platform of Sirkeci Train Station, the legendary terminus of the Orient Express.

The use of the venues, and the music played inside them, is a celebration of multicultural heritage in a city where the presence of Jews, Armenians and Greeks, as well as other minorities alongside the majority Muslim population, is a key part of its urban identity.

Today, these buildings are a symbol of the proud presence that Turkey's minorities maintain in the former Constantinople, once the capital of the Roman, Byzantine and then Ottoman empires.

"Istanbul has been the capital city of three empires and home to three major religions. They all left their landmarks in the city," director of the Istanbul Music Festival and deputy director general of IKSV, Yeşim Gürer Oymak, told AFP.

"A festival should also underline the historical heritage of the city where it takes place and make connections with its cultural identity," she added.

This year saw a concert held for the first time in the Neve Shalom Synagogue, a key place of worship for Istanbul's Jewish community, which was hit twice by deadly attacks -- first in a 1986 gun attack and then a 2003 bombing blamed on terrorists.

Istanbul may not have an ultra-modern concert hall like Paris or Hamburg but some of the finest acoustics in the city are to be found in historic buildings which also double as concert venues.

Possibly the finest venue for an orchestra in the city is the Hagia Eirene -- a former Byzantine church, now a museum -- that dates back to the 6th century and where audiences can enjoy classical music with pin sharp acoustics marred only by the occasional swooping pigeon.

At the concert inside the Grand Bazaar, its historic walls echoed with a celebration of Istanbul's cultural heritage, bringing together songs of Armenian, Ladino, Jewish as well as Turkish origin, led by traditional musician Hakan Güngör.

"This is the first time we perform a concert in the Grand Bazaar. It is a very important place with very authentic shops and our music is also very authentic," said Çağ Erçağ, one of Turkey's top classical cellists.

Oymak said there were still locations in Istanbul where she dreamt of holding concerts, in particular a concert of "tolerance and harmony" at the historic Sultanahmet Square -- which is flanked by the Hagia Sophia and Blue Mosque -- fusing elements of Western and Eastern music.