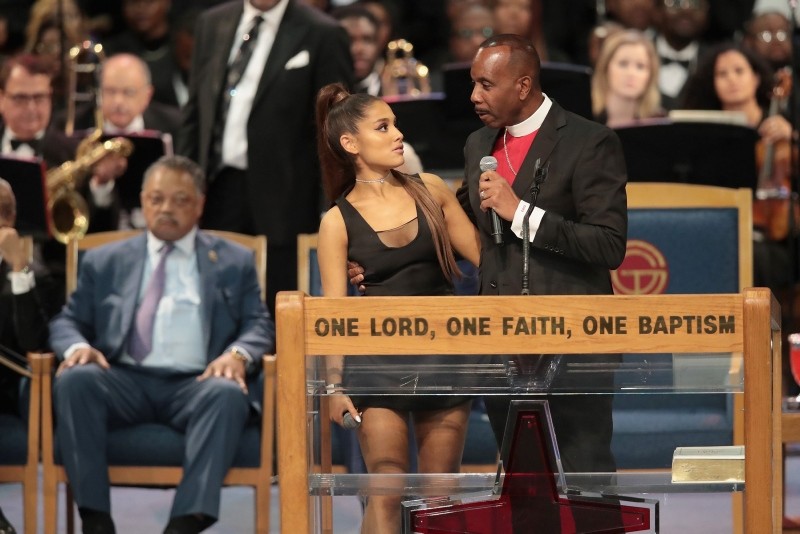 Singer Ariana Grande speaks with Bishop Charles Ellis III after performing at the funeral for Aretha Franklin at the Greater Grace Temple on August 31, 2018 in Detroit, Michigan. (AFP Photo)
by Associated Press Sep 01, 2018 12:00 am

The "Queen of Soul" Aretha Franklin was remembered during a nearly eight-hour service that featured tributes from former U.S. President Bill Clinton and civil rights leaders, as well as often emotional performances by entertainers, but a preacher's moves on Ariana Grande made its mark to the funeral.

Bishop Charles H. Ellis III led Franklin's funeral and awkwardly greeted Grande on stage after she performed "(You Make Me Feel Like) A Natural Woman." Images of the moment showed Ellis' hand holding Grande well above her waist, with his fingers pressing against one side of her chest.

The preacher apologized in an interview with The Associated Press at the cemetery where Franklin was interred late Friday.

"It would never be my intention to touch any woman's breast. ... I don't know I guess I put my arm around her," Ellis said. "Maybe I crossed the border, maybe I was too friendly or familiar but again, I apologize."

He said he hugged all the performers during Friday's eight-hour service.

He added: "The last thing I want to do is to be a distraction to this day. This is all about Aretha Franklin."

Many people posted close-up images of the moment on Twitter, tagging it #RespectAriana.

Ellis also apologized to Grande, her fans and Hispanic community for making a joke about seeing her name on the program and thinking it was a new item on the Taco Bell menu.

"I personally and sincerely apologize to Ariana and to her fans and to the whole Hispanic community," Ellis said. "When you're doing a program for nine hours you try to keep it lively, you try to insert some jokes here and there."

Ellis' touching of Grande overshadowed some criticism earlier in the ceremony the short dress Grande wore for her performance. Numerous people posted criticisms online that the dress was too short for church.

"#ArianaGrande don't know the below the knee rule for the pulpit in the black church. Somebody hand her a lap hanky and a choir robe. Bless her heart," tweeted one, Tenisha Taylor Bell.

As former president Bill Clinton sat behind her with a big smile on his face, Grande appeared nervous as she made her way to the front of Greater Grace Temple, apparently unclear where she was supposed to stand for her performance.

She found her footing, though, and made it through, later collecting an awkward hug from Ellis when she was finished.

Robinson, the Motown great, remembered first hearing Franklin play piano when he was just 8, and he remained close to her for the rest of her life. They talked for hours at a time.

"You're so special," he said, before crooning a few lines from his song "Really Gonna Miss You," with the line "really gonna be different without you."

The epic funeral unfolded on the same day as services for Arizona Sen. John McCain in the nation's capital, creating a challenge for some news networks trying to show both ceremonies. The McCain memorial, with its reverential silence and ramrod-straight honor guard, contrasted sharply with the joyous remembrance in Detroit.

Bill Clinton described himself as an Aretha Franklin "groupie," saying he had loved her since college. He traced her life's journey and praised her as someone who "lived with courage, not without fear, but overcoming her fears."

He remembered attending her last public performance, at Elton John's AIDS Foundation benefit in November in New York. She looked "desperately ill" but managed to greet him by standing and saying, "How you doing, baby?"

Her career, Clinton noted, spanned from vinyl records to cellphones. He held the microphone near his iPhone and played a snippet of Franklin's classic "Think," the audience clapping along.

"It's the key to freedom!" Clinton said.

Actress Cicely Tyson reworked the Paul Laurence Dunbar poem "When Malindy Sings" to "When Aretha Sings." Music mogul Clive Davis, who helped revive Franklin's career in the 1980s, described her as a loving friend and a dedicated and unpredictable artist, whose passions ranged from soul to ballet. He remembered her turning up at a tribute to him in a tutu.

"There was the Queen of Soul, accompanied by members of the City Center Ballet Company," he recalled, with Franklin "doing well-rehearsed pirouettes and dancing with most impressive agility and dignity. It was wonderful."

Music was in abundance, of course. Jennifer Hudson, whom Franklin said she wanted to play her in a movie about her life, brought the crowd to its feet with a rousing "Amazing Grace." Faith Hill performed "What a Friend We Have In Jesus."

The Aretha Franklin Orchestra opened the funeral with a medley featuring "I Say a Little Prayer," ''Angel" and other songs she was known for, along with such gospel numbers as "I Love the Lord" and "Walk in the Light."

Gladys Knight segued from "You'll Never Walk Alone" to "Bridge Over Troubled Water." Near the end, Stevie Wonder brought the dwindling audience to their feet, swaying to his classic tribute to love, "As." Jennifer Holliday ended the funeral with "Climbing Higher Mountains," an uptempo gospel original by Franklin herself.

Sharpton received loud cheers when he denounced President Donald Trump for saying that the singer "worked for" him as he responded to her death. "She performed for you," Sharpton said of Franklin, who had sung at Trump-owned venues. "She worked for us."

"She gave us pride. She gave us a regal bar to reach. She represented the best in our community," Sharpton said.

Many noted her longtime commitment to civil rights and lasting concern for the poor. The Rev. Jesse Jackson recalled Franklin raising money for the Rev. Martin Luther King Jr. and urged attendees to honor her memory by registering to vote. Her friend Greg Mathis, the reality show host and retired Michigan judge, recalled his last conversation with her. They talked about the tainted water supply in Flint. "You go up there and sock it to 'em," she urged Mathis, paraphrasing the "sock it to me" refrain from "Respect."

The funeral also briefly became an impromptu forum on the Black Lives Matter movement and other issues critical to the African American community.

The Rev. Jasper Williams Jr., pastor at Salem Baptist Church in Atlanta, delivered the eulogy for Franklin and used his time at the podium to raise social issues he said were critical to the black community.

Singer Stevie Wonder appeared to respond in part to Williams when he delivered remarks at the end of the service, following his own musical tribute to Franklin.

"We can talk about all the things that are wrong and there are many but the only thing that can deliver us is love. So what needs to happen today not only in this nation but throughout the world is that we need to make love great again," Wonder said.

"Aretha's singing challenged the dangling discords of hate and lies and racism and injustice," the pastor William J. Barber II said. "Her singing was revelation and was revolution."

Her body arrived in a 1940 Cadillac LaSalle hearse. She wore a shimmering gold dress, with sequined heels — the fourth outfit Franklin was clothed in during a week of events leading up to her funeral.

The casket was carried to the church that also sent Franklin's father, the renowned minister C.L. Franklin, to his and Parks' final resting place at Woodlawn Cemetery, where the singer will join them. Pink Cadillacs filled the street outside the church, a reference to a Franklin hit from the 1980s, "Freeway of Love."

Detroit Mayor Mike Duggan announced during the service that the city would rename the riverfront amphitheater Chene Park to "Aretha Franklin Park."

Family members, among them granddaughter Victorie Franklin and niece Cristal Franklin, spoke with awe and affection as they remembered a world-famous performer who also loved gossip and kept pictures of loved ones on her piano.

"I'm sad today, because I'm losing my friend. But I know the imprint she left on this world can never be removed. You showed the world God's love, and there's nothing more honorable."