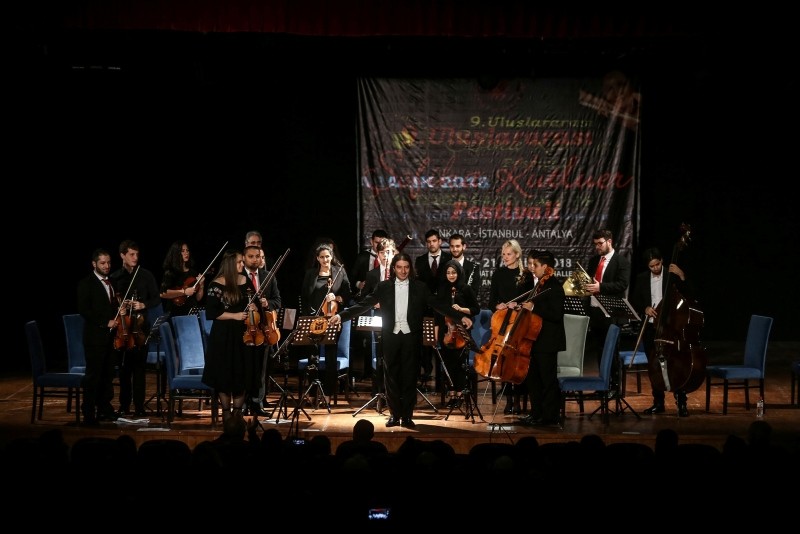 The Palestine Youth Orchestra (PYO) performed Tuesday in Turkey for the first time as the guests of the 9th International Şefika Kutluer Festival.

Şefika Kutluer, a prominent Turkish virtuoso widely known by her nickname "Magic Flute and Turkey's goodwill ambassador to UNICEF, performed alongside the orchestra as a soloist.

Conducted by Eugeniy Chevkenov, the chairman of the Culture Committee of Vienna Economic Forum and founder and music director of the Ensemble Concertante Vienna, the orchestra left the audience captivated at the Nazım Hikmet Cultural Center in Ankara's Yenimahalle district.

Established in 2004 by the lengthy efforts of world-renowned pianist and conductor Daniel Barenboim and Palestinian intellectual Edward Said, the orchestra brings together young Palestinian musicians from around the world. The applications of the orchestra are open to Palestinians based within historic Palestine and throughout the diaspora.

The night started with a movie screening presented by the Barenboim-Said Foundation, which was established with the aim of supporting the efforts of Palestinian people that have been and still are facing oppression and aggression.

Mariam Said from the Barenboim-Said Academy made a presentation about the founding of the PYO and the music academies formed in German capital Berlin, and Ramallah, the seat of the State of Palestine in the occupied West Bank.

Saying that music and art have a unifying affect on people, Said said that children were getting musical education in these academies from a very young age.

She also said that she feels glad to be in Turkey for the festival.

The orchestra will also perform in Istanbul on Wednesday as part of the festival and give a concert at the Zorlu Performing Arts Center.

Kutluer and the PYO will also perform in Ramallah and Jerusalem next week.