Musical wonder Anjelika Akbar now has her own TV show 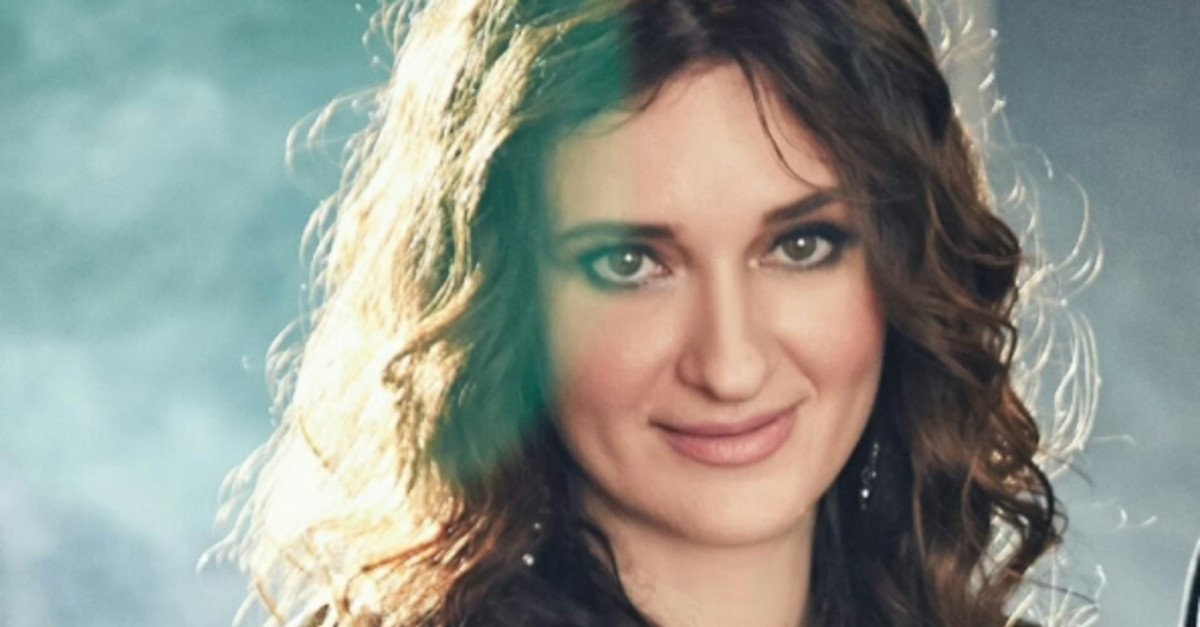 Anjelika Akbar is loved by many Turkish audiences with her unique compositions and performances.
by Zeynep Esra İstanbullu Mar 20, 2019 12:17 am

A productive composer, a talented pianist and a warm-hearted personality, Anjelika Akbar, known for her various projects, now has her own TV show that airs weekly on TRT 2

Known by nearly everyone in Turkey as a successful pianist and humble composer who embraces Turkish culture, Anjelika Akbar has been living in Turkey for years. Now, she has launched a TV show where she shares insights with her guests who are mainly artists.

Born in Kazakhstan during the reign of the Soviet Union, she met with art at a very early age thanks to her family.

"My mother was a pianist and choir master while my father was also a choir master and philosophy professor at the same time. In addition to piano, my mother was also an accordion virtuoso. My father, on the other hand, used to play numerous instruments. There were so many instruments at home. However, the most powerful one of them, in terms of power of expression, was the piano. Upon seeing my interest for it when I was just a couple of months old, they pulled it next to my baby cot. I couldn't walk yet, but I found the piano in front of my fingers whenever I stood up in my cot. Within a couple of months, my finger gained strength while striking the keyboard and I unintentionally learned the places of the keys and the difference between the high, low and middle octaves. Then, when I was about 1 or 1.5 years old, I started to express myself with the piano by looking at the pictures I saw in the books. In the aftermath, my mother taught me the names of the musical notes, how to write them and how to match their places on the keyboard. Hence, I started to study music more consciously when I was a 2.5-year-old toddler," Akbar said.

Akbar is a talent who was recognized on time and luckily her talent was not wasted. "When I turned 4, I was invited to Gnesinykh Musical Institute as a boarder. Serving within the body of Moscow Conservatory, the school accepted wonder children. However, my mother didn't let me to go to Moscow on my own at such a young age. A few years later, I was enrolled at the Upsensky School, which was the Tashkent agency of the school in Moscow. I started to compose at the age of 5 and at the same year, I gave my first personal, big concert."

MEETING A LEGEND IN MUSIC

"While I was going on to study compositions, I started to present my first compositions for the chamber orchestra. My first composition master was professor Boris Zeidman, the legend. When I was 10, one of my compositions for the Chamber Orchestra was played at a concert in Tashkent. It seems that Boris Zeidman was among the listeners. He liked the composition and wanted to meet me. That's how we met. Picking me from the piano department I was enrolled in, he wanted me to concentrate on composition studies. Then, I continued to study for the two departments. When I came to Turkey, I completed my M.A. and doctorate at Hacettepe State Conservatory, Department of Conductorship and Composition as student of İstemihan Taviloğlu and Turgay Erdener," Akbar summarized her long and fruitful education process.

Anjelika Akbar first came to Turkey before the dissolution of the Soviet Union. "I first came to Turkey with my former spouse. We both came for an international film project as UNESCO members. He was the scenarist and I was the composer of the film. We had conducted filming at a few more spots before Turkey. I was pregnant and the shooting took longer than expected. Hence, I gave birth in Istanbul. After all, I already felt that I was in love with this country the moment I arrived and that was the main reason of my settlement in Turkey. I always follow my heart. My heart comes before my rationality," she noted.

Throughout the time she lived in Kazakhstan, Akbar was mostly acquainted with Western and Russian classical music throughout. "I hardly ever heard Eastern sounds. The first time I met with Eastern music was when I was in Uzbekistan. From the very beginning I was amazed by its tunes. They were taking me to a dream world whenever I listened to. However, I didn't listen and think on it so profoundly. Rather, I just listened to it just to experiencing that strange feeling over me. Then, Indian music really attracted me, I really loved it. That was the case also for my relation with Turkish music. For a long time, I just analyzed the sounds around me and detected the ones I loved. For example, the 'ney' (reed flute) mesmerized me the very first moment I listened to it. Also, the sound of the oud affected me the same way. The effect of Turkish music can be detected in some of my work that I composed during my first months in Istanbul, like 'Eastern Fantasy' and 'Anatolian Breezes.'

"Although I didn't use any Turkish music in these compositions, they were full of breezes from Turkey. In that period, which is still clear in my mind, I was quite impressed by Black Sea music. Besides, I am quite attracted to 'ilahi' (hymn). The word itself, which I came across for the first time, the hym

ns and that state of witnessing the performance, affected me. Years after, I started to analyze them more deeply and I gradually started to use them in my adaptations. I started to use also some folk songs, trying to be careful and meticulous. I try to protect this music by not interfering with its depth and originality much. Needless to say, I both listened to 'The Turkish Five' and the other composers who harmonized classical music with Turkish classical music and performed their works within time. They are very precious pieces."

Akbar stated she has established a mutual admiration with Turkish audiences. "We love each other so much. We mutually feed each other I guess. I accept very good feedback from very different fractions and age groups and I become happy. I thank them all."

The acclaimed musician has launched a TV show on TRT 2 lately, colored with conversations and piano performances. "I was looking forward to making a culture and arts based program for years. The right time must be now. If the guest is a musician, he or she will also present their own performance on the condition that they want. Throughout my life, since my childhood, I easily improvise. At the end of the conversation with my guests at the program, I translate the feelings and thoughts they left on me into the language of music and make an improvisation." Hüseyin Sorgun from State Theaters named the program, "Anjelika Akbar ile Sesler" ("Sounds with Anjelika Akbar").

Akbar sums up the philosophy of the program with the motto "Music is everywhere." "The universe is totally intertwined by sounds. Music is everywhere; you can find it in the branches of art as painting, sculpture, architecture and poetry and everything can be translated into the language of music. I choose my guests on the basis of this concept. I have already fixed art figures, musicians, thinkers, writers in addition to art-loving businessmen who invest in it and some political figures on the list. Needless to say, I consult with the program and channel managers," she explained.

Up until now, the team has conducted shooting with eight guests and four of the shows have been broadcast so far: Piano virtuoso Gülsin Onay; painter, miniature and ceramic artist Günseli Kato; painter and artist Süleyman Saim Tekcan and business woman Demet Sabancı Çetindoğan. "The other episodes shot with my other guests will be broadcast in the following days, featuring choreograph, art director Tan Sağtürk; Prof. Mahmud Erol Kılıç; violin virtuoso Cihat Aşkın and performer, composer Özhan Eren."

The program is a feast for the ears with performances. "I always perform a musical piece while opening the program. Sometimes I perform one of my compositions or adaptations while I may perform pieces from Western classical music or my Turkish music adaptations. At the end of every program, as I said before, I present an improvisation inspired by my guest and my inner world at that moment. That part is very exciting for me as I don't know what to play even before the moment I sit at the piano. I intentionally don't let myself think about it before so that the improvisation may only belong to that very special moment. If the guest is a musician and wants to perform, then they present a solo performance or perform with me. My guests are welcomed on stage even if they are not professional musicians. For example, Demet Sabancı Çetindoğan wanted to be a pianist when she was a child. She performed what she learned in her childhood in such a successful way for our program," she said.

Broadcast at 4 p.m. every Saturday, the program is a source of great happiness for Akbar as a new experience. "I have appeared before the cameras as much as I took the stage for years. I attended numerous TV programs. The advantage of being on the stage since childhood is that you don't get nervous before the cameras or on the stage. Among the programs I attended, I like the live broadcasts more. People generally get really nervous by live broadcasts but that one is my favorite one. Everything happens there spontaneously and irreversibly. It requires extreme concentration and I love it. I never want to know the question to be asked beforehand, before recording. What is important for me is the sincerity, improvisation and fluency. However, I wasn't the one who was presenting those programs. Now, I'm the one who invites and talks to the guests. I may not have enough experience in the area; however, I try to bring perfection with the team."