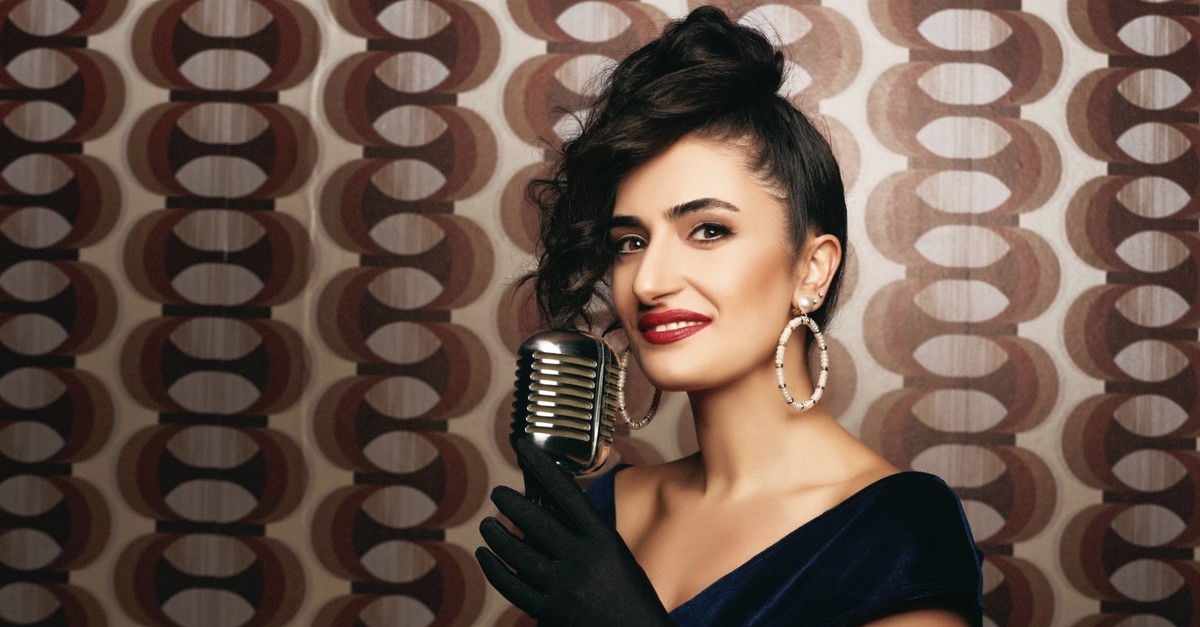 Having made an album where she blends jazz and Turkish classical music succesfully, Yaprak Sayar has been the center of attention lately.
by Zeynep Esra İstanbullu
Jun 04, 2019 12:12 am

I had a pleasant conversation with Yaprak Sayar about her unusual musical journey and this new style she created.With her natural vocal gift, Sayar was always singing and has been praised since primary school.

"I was always the child who sings and whose singing has been requested since childhood. Singing suited my tone color. Everyone said that my voice was very mature for my age and that I had great control of my voice. From primary school on, my teachers have always insisted to my parents that I should go to the conservatory. But I never went to a music school. I wanted to be a biologist in high school. I decided to go to the Üsküdar Music Society when I was preparing for university. While attending there, I decided to enter the conservatory exam for my bachelor's degree," she said, explaining how she started music. Children preparing for the conservatory are usually equipped with training starting from their infancy, yet Sayar did not receive any professional music training until university. She guessed she had to give a pretty hard test.

"I was extremely nervous when I was taking the exam because I was competing with young people who have been working for years in this field, who were trained in this field for many years. I had no technical or musical knowledge. I prepared with my own resources just for two weeks. But talent is so precious that my dream came true. I don't believe age is so important in art. I had no classical training. When I started singing during the exam, the teachers raised their heads and looked enchanted. I have a God-given talent, I suppose. Plus, courage brought me here. I drew my own path as there aren't any musicians in my family. I won the conservatory in the first exam. I received all my technical training at the university," Sayar said.

Turkish classical music is not popular among young people and it also has a heavy and detailed order. However, from an early age, Sayar always felt close to the genre.

"I was drawn to Turkish classical music myself. I had a natural interest since my childhood. I used to attend the choirs in schools. My entire repertoire consisted of the songs at school choirs. I had a weak repertoire compared to other friends when I first entered the conservatory. I had to work hard to cover this gap," she noted.

Continuing her academic studies after the conservatory education, Sayar dug deep into this ocean with her master's degree program that she is still attending.

"I'm doing my master's degree in Religious Music at Marmara University's Department of Theology. Turkish music and religious music are quite intertwined. Many composers used to compose at dervish lodges. The lyrics they use usually belong to Sufi poets. That is why they fed from each other, especially in the classical period. I wanted to explore the spirit of this area, which also feeds me in a spiritual sense. This was also reflected on my singing. My religious music repertoire also expanded," she further explained.

Besides her academic work, the young artist sings on TRT radio, a state channel.

"I'm a regular singer. I work on the radio but sometimes there are TV shots as well. We constantly broadcast. People used to listen to TRT radio more when it was the only station but now because it is possible to reach a wide variety of music through various channels, it doesn't have many listeners. Still, we do have a certain regular listeners. There is a generation, consisting of retired people who continue the tradition of a certain periods but I want the audience to become younger. More than half of the viewers were young when I did a concert for my album. This made me really happy."

FIRST IN THE AREA

While there have been Turkish classical music fusions before in the instrumental field, the first fusion accompanying vocal performance with the jazz music infrastructure was done by Sayar.

"No one blended Jazz and Turkish music with lyrics before. There have been instrumental works. While such fusions may not be firsts, I performed the first verbal song for the first time. We performed works of contemporary composers. I never sang like jazz. The music in the background is jazz but I always sang with the Turkish classical music style."

AN ALBUM BEING BORN

Sayar had planned to release an album for a few years.

"Not just like everyone else but one that catches up with the time, something that has not been done before. During that time, I was giving lessons in a workshop, like a certificate program on repertoire and style at Bahçeşehir University. They wanted to perform a concert in Washington, as part of the Ertegun Jazz Series. The board of trustees gave us an idea to see if we could perform jazz with Turkish classical music. The concept was first staged there. We went there with a small team. Everyone loved it and they stood to applaud. I felt like I was really making music at that moment. The nature of jazz gives you the chance to improvise. The opportunity to rediscover myself and the feeling of liberation were both very good for me. I realized that I should continue this after the joy I felt that day and from all the positive feedback. Then we made this album."

Sayar chose the songs on the album and she easily determined the new versions with jazz music in the background in her head.

"The first song I selected in the project was the song of my first video: 'Kara Kız' ('Brunette Girl'). I could feel the sound of all jazz instruments when I first sang it. I selected all the songs this way. We determined them in consultation with Baki Duyarlar. I didn't rush the song selection. We continued to work with instrumentalists that I had worked with in the past for the jazz instrumental parts. We never had any issues with harmony. We understood each other very well and created together."

Yaprak Sayar was highly acclaimed with her fusion album "Jazz Musikisi." Music lovers had begun listening to her with interest before the album as well. There was a crowd, who started following her, when she sang on the TV show of historian Murat Bardakçı. Sayar has a memory she can't forget and that affects her very much since that time.

"I sang with Murat Bardakçı about five years. I was young. The program was broadcast very late and it was very hard singing that late. As the body sleeps at that hour, I was constantly exercising to keep the sound muscles awake. I sang along with a tambour Bardakçı was playing. One day I got a very interesting message. A woman was pregnant, lost her baby. She wrote that she had overcome depression at that period with my voice. Using your voice is a miraculous thing. I can touch people with my voice and that's why I like it."

There is an ongoing discussion about Turkish classical music: Should it become more popular, reach a wider audience or stay among its audience? Yaprak Sayar is a reformist in nature, saying, "I think it should become more popular. This belongs to our culture. We need to teach it to young people in order for that culture to survive. It should become popular in order to last. But this should be done without sacrificing quality and essence. Maybe if young people performed this genre on TV, it can expand to a larger audience."