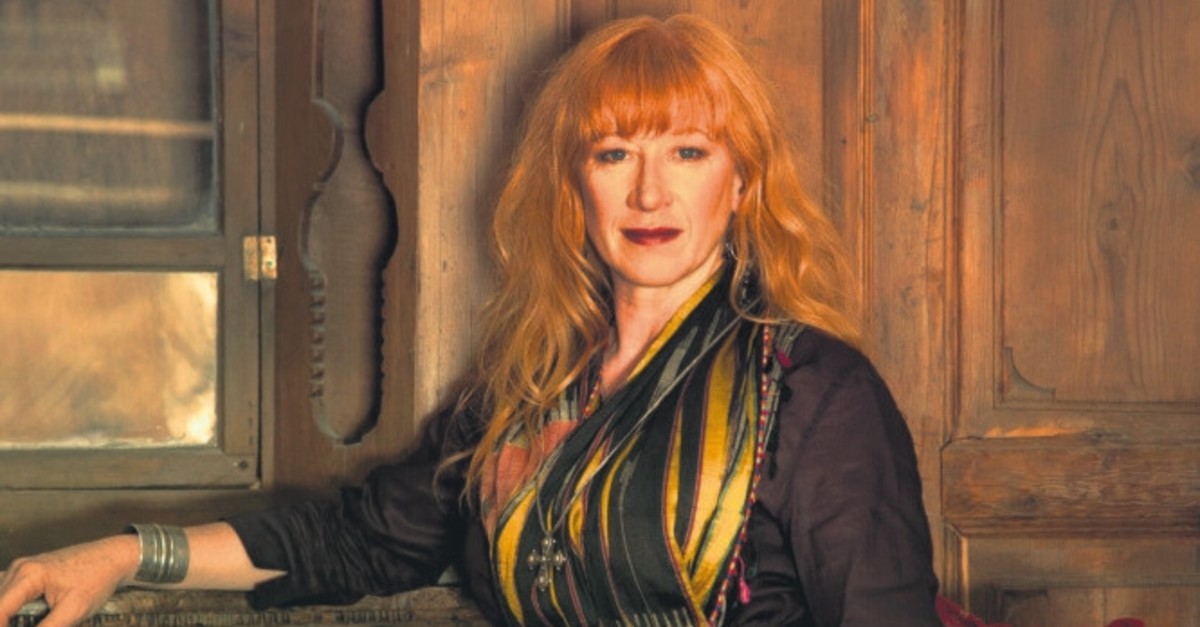 Loreena McKennitt will perform in three cities, three days in a row.
by Zeynep Esra İstanbullu Jun 27, 2019 12:19 am

Loreena McKennitt will present a musical feast to her fans in Turkey with the best songs of her career and from her latest album ‘Lost Souls,' in three concerts in İzmir, Ankara and Istanbul

Canadian singer and composer Loreena McKennitt, who has sold nearly 15 million albums around the world with eclectic Celtic music spanning a career of over 30 years and known as a "musical travel writer," is back in Turkey after a long break with three concerts.

The renowned singer will be on stage at Kültürpark Open-air Theater in İzmir on June 29, at Congresium in Ankara on June 30 and at the Volkswagen Arena in Istanbul on July 1.

Her albums have been best sellers in North America, South America, Europe and Australia. Addressing a large mass worldwide with mystical songs, the artist will meet her fans in Istanbul, Ankara and İzmir as part of the world tour of her latest album "Lost Souls" released in 2018.

"Lost Souls" is a rich and eclectic presentation of contemporary ideas ranging from Indo-European tribes to Bedouins. In the album, featuring the nyckelharpa (Swedish folk instrument), oud, zither, flamenco guitar and percussion instruments, Loreena McKennitt plays the piano, keyboard, accordion and harp in addition to her vocals.

Loreena McKennitt has been the recipient of numerous awards, including the Juno, Canada's most important music award and the Billboard International Achievement Award. She was a Grammy Award nominee twice.

In addition to her musical works, McKennitt established the independent record label Quinlan Road in 1985, where she managed work from marketing to promotion activities and became a successful businesswoman in the music industry.

A life filled with success

In her seventh studio album, "An Ancient Muse," she gave place to the songs "The Gates of Istanbul" and "Sacred Shabbat," for which she was inspired by famous Turkish song "Katibim."

The introductory film of her single "Caravanserai" was shot at the fairy chimneys in Turkey. In this song, she travels to the Greece of Homer, the Istanbul of the Ottomans and England of the Crusader period by exceeding time and waves.

McKennitt has taken part in many social projects, as well. In 1998, she founded the Cook-Rees Memorial Fund for Water Search and Safety. She has led a fundraising campaign of $4 million to date for their activities and initiatives, such as maritime safety education, research and support for naval search and rescue units nationwide. A large part of the fund was obtained from Loreena McKennitt's "Live in Paris and Toronto" album sales.

The donations obtained from the sales of the same album in Greece and Turkey was given to the Turkish Red Crescent and the Greek Red Cross.

McKennitt bought Falstaff School in Stratford in 2000. Two years later, she founded the Falstaff Family Center, a voluntary and non-commercial organization that provides space and opportunities for some community and family groups. McKennitt is also the founder of The Three Oaks Foundation, a charity that donates money to cultural, environmental, historical and social groups.

McKennitt is known to have an interest in archaeology and ancient heritage. She came and saw excavation sites and historic places in Ankara, Konya, Safranbolu and Cappadocia. "Visiting the archaeological sites was wonderful. It was a beautiful day in May when we drove out there. The plains reminded me, in some ways, of the prairies where I grew up in Manitoba in the middle of Canada. Visiting the museum in Ankara, particularly the Celtic artifacts, was exceptional. I think one of the special aspects of this trip was to learn more about the ancient history of the Celts as well as the Phrygians, Lydians and of course the Ottoman culture, appreciating more fully how our histories intertwined at some point.

Additionally, my few visits to Cappadocia have also been filled with wonder at the fairy chimneys, the early Christian churches and of course the local and rural hospitality," she noted.

Implying there is a relation of Celtic culture and Anatolia, she said, "I am only at the beginning of learning about this connection, but it is believed that some of the earliest Celtic tribes were in this area and that Saint Paul's letters to the Galatians was one of the earliest. It is fascinating to consider the many cultural evolutions which took place since that time."

Leading a very humble life, McKennitt is impressed by Sufi culture, music and mindset. "From the limited exposure I have had to some aspects of Sufism, I am drawn to the different paths on which one embarks upon in search of their internal examination, enlightenment and growth. I am convinced of the central value of love, which is common to many spiritual paths in terms of a sense of harmony and integration."

McKennitt's "Sacred Shabbat" and "The Gates of Istanbul" are very delicate expressions of her love for Istanbul. "I think there are places that you are drawn to and speak to you in different ways. Istanbul has been one of those places. Of course, until one really gets to spend some serious time in a place, you cannot pretend to understand or appreciate everything or even most things. But having grown up in Canada and being educated there, I have realized how little I was taught in my education at school, about countries and cultures east of Europe. I suppose, through the path of my music and career, I am trying to embark upon a process of self-education to fill in a lot of missing pieces. One cannot understand or be a fully-formed global citizen and understand our contemporary place unless one has a deep appreciation for all history, geography and cultures. Through history one can identify the lessons learned to bring forward," she said, on her effort to get a better understanding of other countries.

Among the many Turkish musicians she has heard up to now, a few made an impact on her soul. "I have heard so many wonderful Turkish musicians since my first visit it is hard to pick out just one but I am aware of folk artists like Arif Sağ and Belkis Akkale and artists mixing local and western genres such as Barış Manço are inspiring. Everyone will also probably already know that Nilüfer recorded a beautiful interpretation of 'Tango To Evora' in the late 1990s which helped bring my music to the attention of an even wider audience of Turkish listeners."

McKennith has a multidimensional view of the world. She is not only focused on music, but also keeps track of former and current political trends closely. "You can admire many different people for a range of either accomplishments, skills, insights or for their character. There are many that inspire me across a range of considerations but I want to mention Nelson Mandela, or some of the leaders of the suffragette movement around the turn of the 20th century as people I admire. I look for people who have the common interest and the long-term view in mind, who are kind, compassionate but not hesitant to stand up for what they believe."

"My musical influences would have been Joni Mitchell, Simon and Garfunkel, Gordon Lightfoot, Alan Stivell, Planxty band," she noted.

In her words, nature and the natural world are her greatest inspirations and she tries to learn all the lessons it can teach. She looks to understand how to be more integrated and less detrimental as a species and more revenant for the multitude of gifts which come through nature. Social work, the environment and animals also are among the most prominent issues for her. "I own and run a family center in Stratford, Ontario the city close to where I live. I believe in our contemporary life, children and families have not been understood or supported enough. Where ever I can, I plant a lot of trees and intend to spend more time focusing on how I can improve my own life with respect to climate change as well as my local community. Given the seriousness of climate change and the short time we as a species have to correct and make adjustments, on the most part I intend to put my career on hold. This may mean that we will not perform again for a while, or a long while, or even ever again. Given that my priorities in life are my family and the community (locally and globally), I feel my energies and resources must be put into this direction," she says of the future.