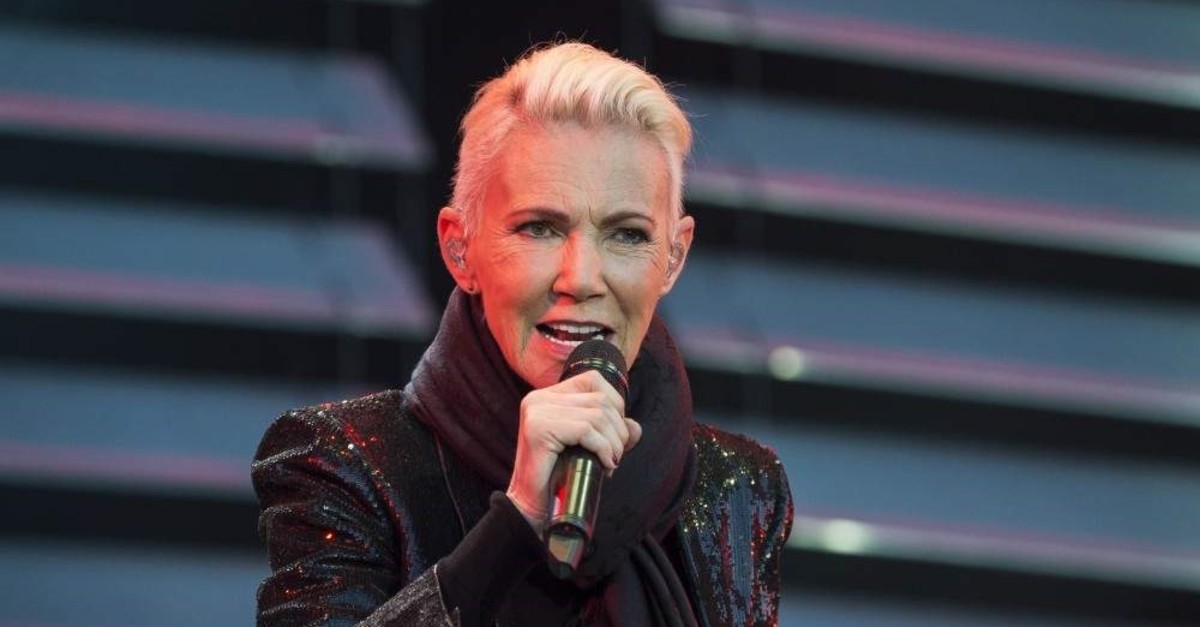 Marie Fredriksson sings during a concert at Fredriksskans in Kalmar, Sweden, 18 July 2015. (EPA Photo)
by Dec 11, 2019 12:58 am
Marie Fredriksson, lead singer of Swedish pop duo Roxette, who shot to global fame in the 1990s with hits such as "It Must Have Been Love," has died aged 61 following a long battle with cancer, her manager said Tuesday.
The mother of two, who died on Monday, was diagnosed with a brain tumor in 2002, which went into remission, allowing for a musical comeback a few years later. By 2016, however, the illness had taken its toll and doctors advised her to stop touring.
Announcing her death, Dimberg Jernberg Management described Fredriksson as "a wonderful person with a huge appetite for life."
"Marie leaves us a grand musical legacy," the company said in a statement. "Her amazing voice — both strong and sensitive — and her magical live performances will be remembered by all of us who was lucky enough to witness them."
Fellow band member and guitarist Per Gessle farewelled his long-term friend in a heartfelt statement, saying: "Things will never be the same. Thank you, Marie, thanks for everything. You were an outstanding musician, a master of the voice, an amazing performer. Thanks for painting my black and white songs in the most beautiful colors," Gessle said. "You were the most wonderful friend for over 40 years."
'Unlikely second coming'
Born in the southern Swedish village of Ossjo, Fredriksson kickstarted her career in the nearby city of Halmstad where she met Gessle in the 1980s. The pair formed Roxette in 1986 and went on to sell more than 80 million albums worldwide, achieving national success with the release of their first album, before an international breakthrough in 1989 with the catchy pop hit "The Look".
The song shot to number one on the US Billboard that same year and would later be followed by "Joyride", "Listen To Your Heart" and "It Must Have Been Love," a heartbreak ballad used in the soundtrack of Hollywood rom-com "Pretty Woman," starring Richard Gere and Julia Roberts.
The aggressive treatment on her brain tumor forced Fredriksson to take a break, however by 2009, Roxette went back on tour and in the recording studio. "The unlikely second coming of Roxette resulted in several new albums, and tours that again put the duo in front of screaming, smiling and crying crowds all over the world," Dimberg Jernberg Management said.
The management team added that the funeral would only be attended by close family members, including her husband Mikael Bolyos and her children Josefin and Oscar. A date was not given.
Last Update: Dec 20, 2019 2:18 am
RELATED TOPICS