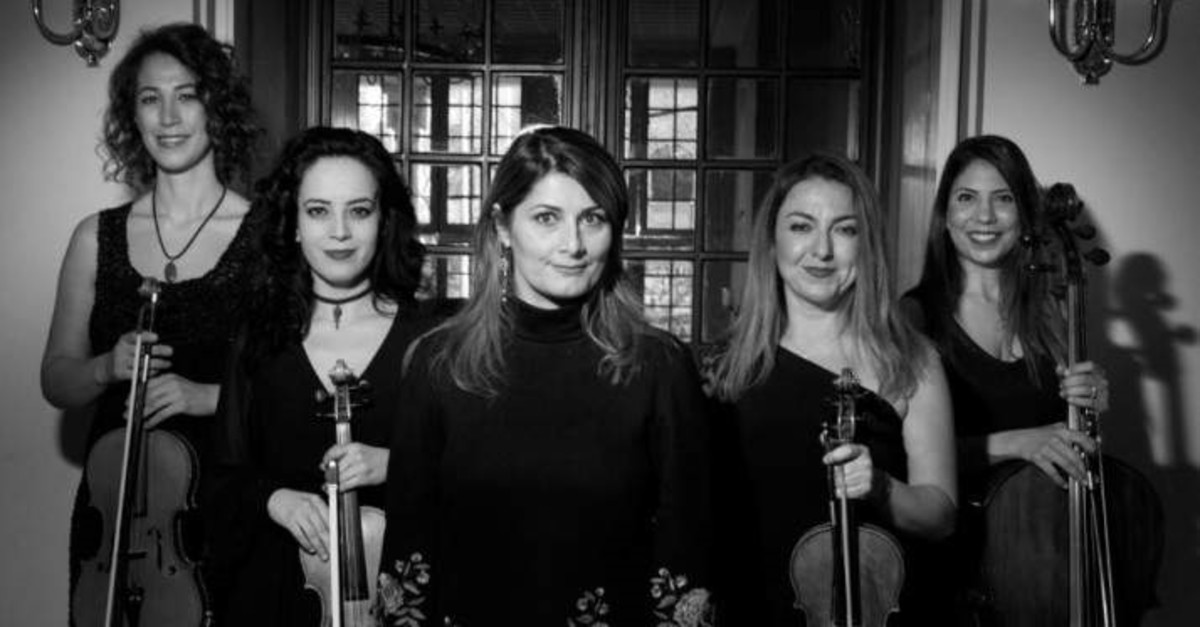 Con Fuoco will share the stage with Umut Kosman at the Baroque Singing Night concert.
by daily sabah Feb 05, 2020 5:44 pm

Bilkent Music Days, organized by Bilkent University's Faculty of Music and Performing Arts in the capital Ankara, will be held between Feb. 5 and March 25, consisting of eight concerts. Lead by artistic director Kağan Korad, the event aims to draw attention to chamber music, one of the most important branches of classical Western music with its rich repertoire. It also attracts music lovers by supporting ensembles operating in this area.

A total of 14 chamber music ensembles and Bilkent Youth Symphony Orchestra will participate in the concerts at Bilkent Concert Hall. Students from Bilkent University's Music Department as well as instructors, graduates and professional artists will perform at the event.

The Music Days began with a concert by Nero Trio, consisting of Onur Türkeş on flute, Poyraz Baltacıgil on violoncello and Başar Can Kıvrak on piano, and with a performance by Quintet Baku, consisting of Huseynali Huseynaliyev on violin, Suleyman Babakishizade on violin, Uzeyir Mahmudbeyli on viola, Katryna Klymenko on violoncello and Tofiq Shiyev on piano, on Feb. 5.

For the second concert on Feb. 12, Aden Trio, consisting of Yağızcan Keskin on clarinet, Ferec Necef on violoncello and Tayfun İlhan on piano will perform Wolfgang Amadeus Mozart's trio "Kegelstatt" and Ludwig van Beethoven's "Trio in B-flat major, Op.11." The other ensemble to join the concert is Hande Dalkılıç and the Nemeth Quartet. The ensemble, consisting of Gülen Ege Serter on violin, Şeniz Aybulus on violin, Elena Ünaldı on viola and Mutlu Varlık Kocaili on violoncello, will interpret Antonin Dvorak's "Piano Quintet No. 2, Op. 81" with pianist Hande Dalkılıç.

The concert on Feb. 19 is titled "The Baroque Singing Night." Baritone Umut Kosman will perform the opera arias with the Con Fuoco ensemble, consisting of Ayşe Özge Erdem on violin, Çise Korkmaz on violin, Yeliz Özkaya on viola, Zeynep Aslı Gültekin on violoncello and Malahat İsmayilova on piano. In the second half of the concert, Ometis will interpret Giovanni Pergolesi's "Stabat Mater." Ometis consists of soprano İrem Kırgız, alto Elif Canbazoğlu, Esra Gökoğlu on violin, Tangör Ertaş on violin, Murat Cangal on viola, Onur Şenler on violoncello and Seçil İrem Keskin on contrabass.

The concert on Feb. 29 will be held in memory of İhsan Doğramacı, the founder of Bilkent University. Işın Metin will lead the Bilkent Youth Symphony Orchestra in the concert titled "Homage to Our Teacher," where Beethoven's overture "Leonore No. 3" and Mozart's 35th symphony "Haffner" will be performed. The soloist of the concert will be chosen from among the winners of the auditions of students from Bilkent University's Music Department.

The concert titled "Beethoven After 250 Years" on March 11 will be dedicated to the great composer Beethoven, whose 250th birth anniversary is being celebrated all over the world. During the concert, the İlhan & Karataş & Dizmen Trio will perform Beethoven's major piano trios called "Ghost" (Op. 70 No.1); and the Szczecin Philharmonic Wind Sextett will perform the sextets of Beethoven and Krommer. The ensemble consists of Piotr Wybraniec on clarinet, Krzysztof Krzyżewski on clarinet, Cyprian Święch on bassoon, Gül Gizem Birçek Święch on bassoon, Dawid Kostrzewa on horn and Radosław Zamojski on horn.

The "Young Stars" concert on March 18 will feature the ensemble that won the auditions of Bilkent University, AGSO Woodwind Quintet and pianist Tuna Bilgin. Ada Dinçer on flute, Ogün Koyunoğlu on oboe, Efil Özdemir on clarinet, Melisa Büyükyörük on bassoon and Tuğçe Divrik on bassoon will perform the works of Francis Poulenc and Ludwig Thuille.

Bilkent Music Days will end with a concert titled "From Andalucia to Beatles" on March 25. The first group in the concert is Q-Art and guitarist Kağan Korad. The ensemble consisting of Esra Gökoğlu on violin, Emel Özer on violin, Murat Cangal on violin, Demet Gökalp on violin, Hacer Özlü on contrabass and Soner Özer on percussion will perform Isaac Albeniz's "Tres Piezas Espanolas, de Falla's Danza Del Molinero" and Georges Bizet's "Carmen Suite" with Kağan Korad.

In the second half of the concert, guitarist Cem Çeliksırt and Bilkent Pro, consisting of the members of the Bilkent Symphony Orchestra – Irina Nikotina on violin, Feruza Abdullayeva on violin, Emre Akman on viola and Serdar Rasul on violoncello – will perform Leo Brouwer's Beatles "From Yesterday to Penny Lane."

The tickets for the concerts are available at bilet.bilkent.edu.tr.