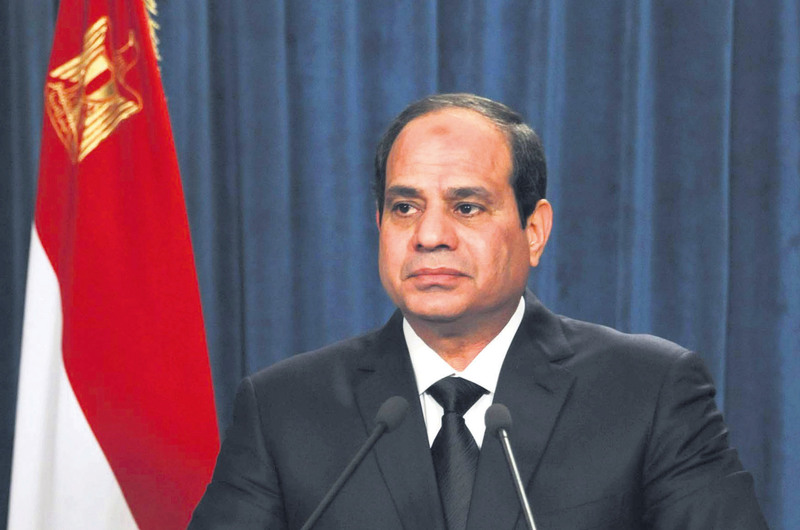 by Mohammad Pervez Bilgrami Mar 09, 2015 12:00 am
The recent beheading in the Libyan city of Sirte of 21 Egyptian Copts by the so-called Islamic State of Iraq and al-Sham (ISIS) and the subsequent airstrikes by the Egyptian air force on the city of Derna, ostensibly to avenge the killings of Christians, mark a new madness by some countries to create more disorder in North Africa. The airstrikes by Egypt were conducted in coordination with the militia of renegade Libyan general and CIA madman Khalifa Haftar. The financiers of Haftar include some of the same misguided dictators who bankrolled Egypt's coup.

In a miserably failed adventure to support Haftar's militia to capture Tripoli International Airport, Egypt and the UAE also conducted airstrikes in August last year. The U.S. has neither publicly condemned nor endorsed Egypt's attack, but its silence on the issue is a sign that the American military state is playing a sinister game. After the U.S. approved the supply of 10 Apache helicopters to Egypt in December to help it carry out "counterterrorism" operations in the Sinai Peninsula, the Egypt coup regime received the go-ahead signal for further action while serving its Western masters.

The Americans are playing a much bigger and dirtier game to destabilize the region than the lackey minds of the region can fathom. One should not forget the fact that the CIA had taken almost 60 years to confess its ominous role in the British-backed coup that overthrew Iranian Prime Minister Mohammed Mossadegh on Aug. 19, 1953.

The dirty games of the U.S. to rob and plunder Middle East resources are not new. It won't be an exaggeration to say that the current mess that we see in the Middle East is the outcome of savage Western lust for colonial control of the region. It has been said before and must be stated again and again that the U.S. military empire today presides over other inferior European former colonial powers in Europe's destructive war mongering. Lacking in any self-respect, long-term vision and independence, the Egyptian regime and some of the Gulf rulers supporting the coup regime are playing the role of colonial lackeys. For them, treachery is an honor and a device to govern their gullible masses.

A lackey like Sisi can never undertake air bombardment on a major scale without receiving permission from his American masters. As the world has seen, there will not be Egyptian air force and army in action if Israel were to slaughter hundreds of Arab citizens. Israel gobbles up Arab territory and slaughters innocent Palestinians at will, and we see Arab rulers groveling in front of their tormentors. That's what ironically defines the Arab League's character.

Egypt's tilt toward the erstwhile colonial powers of Europe, France and Italy in particular, clearly suggest Sissi's acceptance of his military scullion's role. Such Arab "allies" obviously encourage more thuggery by Western powers. It should be remembered that over the last four decades the U.S. has maintained very good relations with Egyptian dictators and spent billions of dollars to strengthen the Egyptian military. Almost all the present-day high-level military officers of the Egyptian junta got their training in the U.S.

Sissi spoke with French President François Hollande on the telephone about the importance of the Security Council meeting to call on the international community to take "new measures" against the spread of ISIS in Libya. France, like other European countries, is playing the old colonial game in the region to boost its fledging economy by selling arms and its "culture" to conflict-affected countries of Africa and the Middle East.

It recently signed a $5.8 billion deal with Egypt to sell French weaponry, including 24 Rafale combat jets, a multi-mission naval frigate and air-to-air missiles. Ordinary Egyptians will have to pay for these weapons their unelected ruler wants to use in the service of outsiders, not Egypt.

Italy, the former colonial power in Libya, is showing its generosity to help Egypt in any military intervention to drive out the forces of ISIS. Italian Defense Minister Roberta Pinotti has said that his country could provide 5,000 ground troops to lead military mission in Libya. The Libyans cannot afford to so easily forget Italy's atrocious colonial legacy that can shame today's worst terrorist groups in its brutality, bestiality and opportunism.

European colonialism has the pretension of democracy and human rights but offers money and military support to the most evil dictators. Sissi and Hosni Mubarak are both clients of these hypocrites. Sissi greatly relies on the overt support of the UAE, Saudi Arabia and Kuwait. Together they have provided a $40 billion aid package for Egypt. Some small minds that have too much money are finding it difficult to control their ambitions at this stage and want to get into all kinds of dangerous schemes of their Western bosses. Control yourself and don't fan flames that you won't be able to control.

Sissi is Egypt's Pinochet. He has killed and maimed thousands of innocent Egyptians and imprisoned many more thousands. Now he is attacking Libya. The entire ISIS project is a deception created by Americans who control the tools of global propaganda. They have managed to nurture unscrupulous allies in their murderous plans.

Suddenly, the so-called Islamic State, ISIL or ISIS, seems to be omnipresent like U.S. military bases around the world, and the crazy group is falsely projected to appear so powerful that it can defeat armies of nations so easily. It then makes videos of its heroics more sophisticated than Hollywood movies and circulates them to more sheep-like audiences. That makes its propaganda more powerful than what's dished out by Western media. The video of killings that has pushed Sissi into a contrived rage might not even be genuine.

Who are Sissi and his lunatic friends trying to fool? Why doesn't the Egyptian regime use its resources to locate the bodies of those Egyptian Copts reportedly killed in Libya? Surely, France and the Pentagon can help their friend Cairo in their ignoble endeavor to find the truth.