The possible limits of the Turkish diaspora 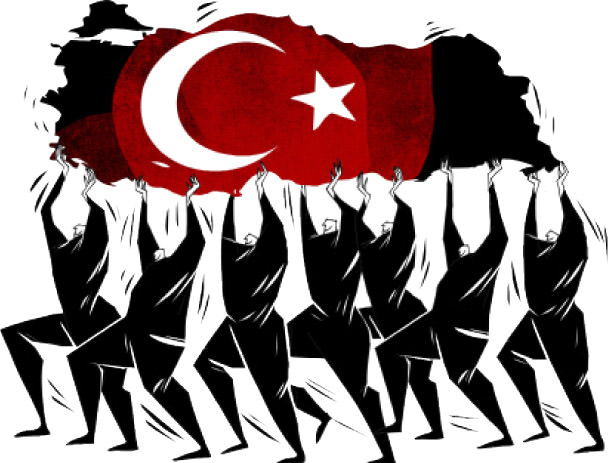 Over the last 15 years, the 6 million Turkish citizens living abroad are defined as the Turkish diaspora, as they represent Turkish culture and identity around the world and have greatly strengthened Turkey's outreach to other countries

The use of the concept of a "diaspora," which has a 2,500-year history, is new for Turkey in daily life and academic and national matters. The concept of a Turkish diaspora has been used more in recent years, but it has been accompanied by secondary arguments of whether there is a Turkish diaspora or not. This new process is not separate from globalization. The concept of diaspora has evolved with the advent of globalization, gaining new meaning. The concept of diaspora that defines "communities that were exiled from their homelands as a result of a traumatic deportation," was generally interpreted in a more encompassing way in the 20th century, and now it is used to define "communities that live outside of their homelands for any reason." The term "modern diaspora" now belongs to a much larger group encompassing immigrants, refugees, guest workers, exiled communities, businessmen, academics and students who live outside of their homelands. The International Organization for Migration defines diaspora as "Emigrants and their descendants, who live outside the country of their birth or ancestry, either on a temporary or permanent basis, yet still maintain affective and material ties to their countries of origin."

How did the term diaspora evolve?

The word diaspora derives from the Greek words "dia" and "sporos," meaning "seeds that have been spread/scattered everywhere." Diaspora is possibly one of the few words that is spelled the same and means the same across world languages. The word is "diaspora" in English, German, Italian, Dutch, Russian and Turkish, "diaspora" in Spanish and Portuguese, "diaspore" in Albanian, "dijaspora" in Bosnian and Serbo-Croatian, "diaszpóra" in Hungarian, "diaspora" in Azeri. It can be said to be one of the few words that reflects the common culture and accumulation of civilization in the history of the world.

Diaspora with a capital "D", which was used for many years to mean only scattered Jewish people around the world, was later used to define the exile of Africans to the West during the colonial period. However, today the term diaspora seems to be used as an instrument of foreign policy in international relations. Particularly during the period following the Cold War, countries wanted to form close relations with their citizens living outside of their borders and as such, many countries formed a diaspora policy. It is not a coincidence that ministries and offices that were working on this topic all went into action in the same period of time in many countries. More than 40 national agencies have come into being regarding diasporas worldwide from 1990 to the present day. In the formal name of these organizations, the terms "diaspora'," "abroad," "overseas" and "expatriate" are generally used. The organization in Turkey that was established for that purpose in 2010, preferred to use the Presidency of Turks Abroad and Related Communities (YTB).

On the other hand, it was noticed that people living outside of their homelands as a diaspora community could make more of a connection with their respective homelands, and this sped up the evolution of the concept of diaspora in terms of its meaning. People identified themselves with the concept of diaspora in order to continue their ties with the countries they were living in, and also their homelands, to be active and to also be noticed. The expression of a Chinese, Indian, Lebanese, Palestinian and Turkish diaspora were first used by the people of those countries who were living abroad. The usage of the term 'diaspora' followed a process that spread from the community to the state from the end of the 20th century. This made it possible for the term to be embraced and used more easily by the overseas communities and those in the homeland.

In Turkey as well, the concept of diaspora has gained significance, and the situation has progressed in the same way it has in other countries. Particularly over the last 15 years, Turkey's six million citizens who live abroad have started to be defined as the Turkish diaspora - the term entering the community, media and academic fields and has started to be used in daily life.

When the historical process is examined, the concept of diaspora in Turkey was thought of in relation with the Armenian diaspora for many years, and was generally thought as a negative expression. However, the approach to the term diaspora derived from rhetorical expressions rather than being a systematic view of the state and society. The distance to this term was never impassable. Especially, the increasing contact in Turkey-Armenia relations in recent years, the condolence message issued last year regarding the 1915 incidents by then prime minister and current president, Recep Tayyip Erdoğan, and the foreign minister and current prime minister, Ahmet Davutoğlu, saying that "the Armenian diaspora is our diaspora," shows that the concept of diaspora has been removed from the negative connotations that it carried for many years.

The new Turkey and the Turkish diaspora

Turkey is close to and has historical ties with the Balkans, the Middle East, the Caucasus, Asia and Africa. Turkey today once again has close relations with countries and communities that lived under the same political and religious roof in history. This process also attracted the attention of the internal and foreign public, and Turkey's policies and relations with countries such as Somalia, Palestine, Afghanistan, Syria, Egypt and Myanmar were questioned. However, Turkey is not the only country in the world that protects and continues its ties from history and makes an effort to improve them. France's Francophony policy in African countries, the U.K. and the Commonwealth and Russia's relations with the Commonwealth of Independent States are among the more prominent examples. Today, France has formed strong social, political and economic ties with its old colonies in Africa through its Francophony policy, which it defines as using a common language and culture. The U.K. continues its relations based on economic interaction with countries that were once part of the British Empire through the Commonwealth. Russia continues political and economic relations with former Soviet countries, also keeping its common historical, language and cultural ties with these countries at the forefront.

As for Turkey, which does not have colonialism and a culture of ghettoization in its history, it is understandable and acceptable to get closer once again and to improve its political, social and cultural ties with communities that have the same culture and civilization. The source of the common language that Turkey uses for cities distant from each other such as Sarajevo, Mogadishu, Skopje, Gaza, Kirkuk, Crimea, Benghazi, Komotini, Jerusalem, Damascus, Kabul, Prizren and Baghdad is the shared history, culture and civilization of this region. With this understanding, which takes its base and legality from a common history, has increased its studies of citizens living abroad and communities that it have historic and cultural ties, especially in recent years. Government organizations such as the Ministry of Foreign Affairs, Turkish International Cooperation and Development Agency (TİKA), Yunus Emre Institute (YEE), Presidency for Turks Abroad and Related Communities (YTB), Disaster and Emergency Management Presidency of Turkey (AFAD), Anadolu Agency (AA), Turkish Radio Television (TRT), Turkish Airlines (THY) and Turkish Red Crescent and nongovernmental studies, clearly show the importance given to citizens living abroad and communities that have strong ties with Turkey. Turkey is today one of the leading countries in humanitarian and development aid.

Common history: The possible limits of the Turkish diaspora

When examples from the world are examined, it can be seen that countries use the term diaspora to define their citizens who are living outside of their homeland. There is generally an approach in terms of constitutional citizenship and lineage. It is different for Turkey and this is how it should be. In 2012 Davutoğlu said: "Not only Turks, but also everyone who has migrated from this country are part of the diaspora for us," clearly showing the new Turkey's point of view on diaspora. Turkey's approach to diaspora is not only toward citizens living overseas, it has a wide perspective that also encompasses those belonging to communities with whom we share a common history, culture and civilization, and those who migrated or were forced to migrate from Turkey throughout history. The diaspora from Turkey includes Greeks, Armenians, Jews, Syrians, and Chaldean, Yazidi and El Turco communities as much as its millions of citizens living in cities such as Berlin, Cologne, Brussels, Rotterdam, Paris, Zurich and Vienna. The diaspora from Turkey does not have constitutional citizenship and lineage, but a common history as its reference.

The definition of the diaspora from Turkey possesses qualities that are particular to itself and is not far from taking a place in literature as a new version of diaspora, in this aspect. Turkey's approach to diaspora must be seen as the new name of the global and regional civilization movement rather than a political challenge.