Democracy and good governance from grassroots 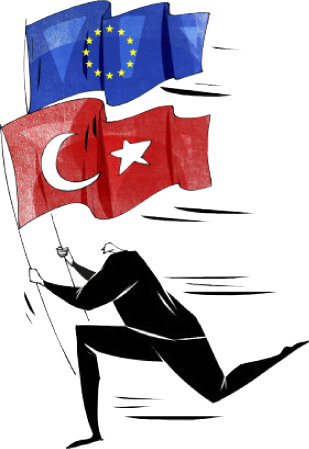 With its governmental bodies and local administrations, Turkey must be ready to actively participate in and become closely intertwined with various kinds of governance structures and actors in Europe such as the Congress of Local and Regional Authorities

Along with the ongoing evolution of the EU toward deeper political and economic integration, a multi-level governance system comprising supranational, national, regional, local and international dimensions has taken shape in Europe. One of the most important actors in this system, where decision making mechanisms and procedures are layered, decentralized, interactive and multifaceted, is the Council of Europe. Intended to promote and protect democracy, human rights and the rule of law on the continent, it has 47 member states representing over 800 million citizens, and all 28 EU member states are also members of the council. Turkey is one of the founding members of the council, established in 1949. Among its key bodies are the European Parliament, the European Court of Human Rights and the Congress of Local and Regional Authorities. Turkey is represented at the congress with a national delegation of 12 full members and 12 reserve members. Six out of the 12 full members represent Turkey at the Chamber of Local Authorities, and the other six full members represent our country at the Chamber of Regions, the two chambers of the congress. During the 28th session of the congress held on March 24-26, the Turkish national delegation was headed by Antalya Greater Municipality Mayor Menderes Türel. Among other figures in the delegation were mayors and municipal assembly or provincial council members from across Turkey. As an assembly member of the Istanbul Metropolitan Municipality Council, I was part of the Turkish national delegation attending the session.

The session focused on the challenges stemming from mass migration, hate speech, radicalization, Islamophobia and terrorism, as well as how to respond to these challenges at local and regional levels. It was stressed that the rising trend of Islamophobia, xenophobia and discrimination is a cause of great concern for all countries. Painting a false picture of Islam, Islamophobia aims to create an abstract and imaginary enemy out of the millions of peace-loving Muslims around the world. Highlighting that Islamophobia, xenophobia and discrimination have serious implications for local and regional peace and security as much as for international stability, the international community was called on, while protecting free expression, to ensure respect for religion and prevent intentional insults against any religion, and to take a united and effective stance against Islamophobia and all forms of hate crimes. Undoubtedly, there can be no excuse for terrorism, but it is a well-known fact that extremism generates extremism. In this context, concerns were also raised in regard to rising negative sentiments directed toward Muslims in European countries, and attention was drawn to the fact that xenophobic and Islamophobic movements that stand in stark contrast to the founding philosophy of the Council of Europe will continue to gain ground across Europe in an age of economic crisis and high youth unemployment. Once again, it was strongly expressed that terror has no religion, nationality or any value, it is a crime against humanity and cannot be justified under any circumstances. In his statement to the Chamber of Local Authorities, Guilherme Pinto, president of the European Forum for Urban Security (EFUS), said that the best responses to terrorism is to be found in the heart of cities. He put the emphasis on prevention, saying: "Where crime is concerned, preventive policies are more effective and less costly." Calling on towns and cities to form networks against terrorism, he said: "The congress has a duty to encourage towns and cities to share their experience of combating terrorism." He also called for local authorities to make citizen participation "a cross-cutting principle of security policies" by engaging civil society in the whole policy-making process.

The ongoing chaos and the humanitarian disaster in Syria were among other hot topics discussed at the session. It was stressed that the situation in Syria has become a threat to the entire region's peace and stability, and policies based on sectarianism and ethnic divisions trigger further instabilities and threats in the wider region. Such policies are the main reason why terrorist organizations like the Islamic State of Iraq and al-Sham (ISIS) and other extremist groups have gained ground in Syria and Iraq. Turkish representatives made it clear that Turkey is taking all necessary measures against the activities of the terrorist and extremist groups, and sees the prevention of the illegal transportation of logistics and manpower across the Turkish-Syrian border as a top priority. However, it was also highlighted that such transnational threats require efficient international cooperation, and that air operations alone will not be enough to contain and eliminate threats posed by terrorist groups in the region.

In an urgent debate entitled "Cities and Towns against Terrorism," held as part of the session, the key role that towns and cities play in the fight against terrorism was emphasized, namely combating stereotypes and exclusion, fostering integration and encouraging all citizens to participate in the life of the community. Also, Mustafa Abdi, mayor of Kobani, a Syrian town near the Turkish border populated mostly by Kurds that came under attack by ISIS, took the floor during this debate and talked about the plight of the people from Kobani during and after the ISIS assault. In a declaration adopted following the debate, the Bureau of the Congress called on all member states and international partners to "step up their support to U.N. agencies and to Syria's neighboring countries by extending humanitarian assistance to the Syrian population," acknowledging that Turkey, as a Council of Europe member state, has played, and continues to play, an important role in providing shelter to numerous Syrian refugees on Turkish territory, and in providing humanitarian aid to the displaced Syrian people particularly through various corridors established along the border.

Turkey has pursued an open door policy for all Syrians and Iraqis who had to flee their countries in the past four years in conformity with its international obligations. The total number of Syrians who have taken refuge in Turkey is currently 1.7 million. Out of this number, more than 251,000 are residing in 25 refugee camps built by Turkey that provide them with all things they need. The rest are living in various towns outside the camps. Turkey is also taking measures to provide them with basic services such as free health care. The financial burden on Turkey has exceeded $6 billion, whereas the total contributions the country has received bilaterally and multilaterally so far stands only at $300 million. Another important track of Turkey's humanitarian operations concerning Syria is extending humanitarian relief items to the northern regions of Syria. Turkey is offering humanitarian relief to these areas through the zero point of the border in accordance with its international obligations and in support of the U.N. campaign. The aid channeled to Syria through this type of operation is worth some $365 million. Turkey has also been closely cooperating with the U.N. to enable U.N. cross-border humanitarian operations into northern Syria since July 2014.

Despite these facts, it was regrettable that the above-mentioned declaration called on Turkey to open humanitarian aid corridors through its borders into Syria, turning a blind eye to the colossal humanitarian assistance and other services Turkey offers to displaced Syrians both in Syria and along its Syrian border. Drawing attention to these facts and stressing that Turkey has so far assumed an unfair share of the burden concerning the crisis in Syria, the Turkish delegation called for proper and satisfying international support for Turkey's humanitarian aid efforts for Syrians, rather than leveling groundless criticism at the country. The continuing crisis and the humanitarian disaster in Syria are problems not only for Turkey and its neighbors, but also the international community should assume sufficient responsibility in sharing Turkey's burden and other neighboring countries in relation to the Syrian crisis.

There was also a thematic debate on the regional dimension of the conflict in Ukraine as part of the session. The Turkish delegation made it clear that Turkey supports all efforts to find a peaceful solution to the current crisis in Ukraine based on territorial integrity and sovereignty of the country. It was stressed that Turkey welcomes and supports the continuing commitment of Ukrainians to democratic reform and the values of human rights and rule of law. Reiterating Turkey's commitment to the peaceful settlement of the conflict as well as to the reform process in Ukraine, Turkish representatives highlighted Turkey's decision to provide a $50 million soft loan to Ukraine and to extend $10 million of humanitarian aid to internally displaced people in the country. In the context of the crisis in Ukraine, it was also stressed that the situation in eastern Ukraine should not be a distraction for the international community, which must pay necessary attention to the state of human rights in Crimea. Underlining that the situation of Crimean Tatars continues to be a priority for Turkey, the Turkish delegation expressed concern about the deteriorating human rights situation in Crimea where Tatars are under growing pressure by the de facto authorities on the peninsula. It was said that stronger international awareness with regard to the situation of human rights in Crimea is essential. As a regional country, Turkey wants the Ukrainian conflict to end peacefully and order to be restored in the region with a view to consolidating democracy, the rule of law and human rights in line with the standards upheld by the Council of Europe.

Finally, I want to touch on an opinion of the Congress on the Committee of Regions' White Paper on Multilevel Governance to draw attention to the importance of this concept in Europe. In its opinion on the 2009 paper, the congress expresses its support for the initiative to establish a Europe-wide consensus on multilevel governance between the EU and the Council of Europe. It is based on a European model of protection of fundamental rights and the strengthening of the regional and local dimension of the subsidiarity principle that ensures that decisions are made as closely as possible to the citizen. With this initiative, action at the EU level is only taken if necessary, or actions by other actors are insufficient to reach previously determined goals. In its opinion, the congress also recommends a further deepening of cooperation with the EU's Committee of the Regions on multilevel governance with concrete steps to foster synergy. It seems that multi-level governance, as a unique system of administration, will have a decisive impact on the future of Europe, and it must be given due consideration in our relations both with the EU and other actors of European governance. With its governmental bodies and local administrations, Turkey must be ready to become closely intertwined with various kinds of governance structures and actors in Europe such as the congress. A stronger presence at such platforms will bring the voice of our local administrations to the European level and help European and Turkish local authorities mutually benefit from their experiences creating synergy between the two.