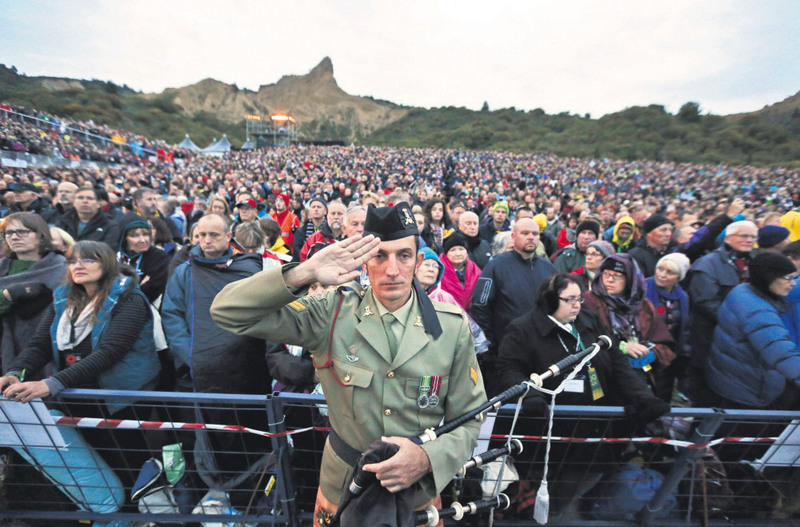 People attend the Dawn Service ceremony at the Anzac Cove commemorative site, in Gallipoli peninsula, Turkey on April 25, 2015.The Battle of Gallipoli was commemorated across the world, including Melbourne, New York and Wellington.
by Manik Mehta May 03, 2015 12:00 am

The Battle of Gallipoli is considered a turning point in history because it dramatically changed the course of World War I, also giving rise to a beautiful friendship between Turks and ANZAC nations that still reverberates

The month of April saw a series of ceremonies around the world to commemorate the 100th anniversary of the Gallipoli Campaign, which is known by various names, such as the Dardanelles Campaign, the Battle of Gallipoli or Battle of Çanakkale. The Gallipoli campaign of World War I took place on the Gallipoli peninsula in the Ottoman Empire between April 25, 1915, and Jan. 9, 1916. The peninsula forms the northern bank of the Dardanelles, a strait that provides a sea route to what was then the Russian Empire, one of the Allied powers during the war. The troops were there as part of a plan to open the Dardanelles Strait on Turkey's Aegean coast to allied fleets, allowing them to seize and secure the Ottoman capital Istanbul and knock the Turks out of the war. Russia's allies, Britain and France, launched a naval attack followed by an amphibious landing on the peninsula with the eventual aim of capturing the Ottoman capital of Constantinople (today's Istanbul). The Allied forces, however, encountered fierce and courageous resistance from the Turks, with the campaign ending on a disastrous note.

Although the campaign was a major Allied failure, it is regarded as a defining moment in Turkish history: The struggle formed the basis for the Turkish War of Independence and the declaration of the Republic of Turkey eight years later under Mustafa Kemal Ataturk who first rose to prominence as a commander at Gallipoli. The campaign also marked the national conscience in Australia and New Zealand: The date of the landing, April 25, is known as "Anzac Day" to commemorate the military casualties and veterans of the two countries. A unique bond of friendship emerged between the peoples of Turkey, Australia and New Zealand following the ill-fated Gallipoli campaign in World War I, as the Turkish consul general in New York, Ertan Yalçın, recently put it during a special commemoration of the 100th anniversary of the Gallipoli campaign at SUNY Maritime College in the Bronx in New York City. "The Gallipoli peninsula where the soldiers of different nations lie in peace side by side stands as an eternal monument of peace and friendship," Yalçın said.

Thousands of Turkish nationals and soldiers, along with thousands of Europeans and Australians and New Zealanders lost their lives. "After Gallipoli, New Zealand had a greater confidence on its distinct identity and a greater pride on the international contribution it could make," said Peta Conn, New Zealand's consul-general in New York. She said the mutual respect earned during fighting formed a long-lasting bond not only between Australian, New Zealand and Turkish soldiers. Indeed, Gallipoli has become a core part of Australian and New Zealand history and is among their earliest international engagements. "The Gallipoli campaign did not create Australia's nationhood. But the courage and sacrifice shown by the soldiers in the face of adversity helped forge a national identity," said Natalie Roche, acting consul-general of Australia in New York.

She said this year's observation of Anzac Day had been one of the most important commemorations in the lives of Australians. Indeed, Gallipoli has become entrenched as part of Anzac Day. Foreign journalists from several Western countries covering the Battle of Gallipoli praised the treatment of foreign prisoners of war by Turkish troops, according to Turkish sources. This view has also been advocated by Professor Selda Kaya Kılıç of Ankara University's Department of History, who has been telling the media that foreign journalists had commended, in particular, the manner of treatment of foreign prisoners of war by Turkish troops, despite the violence encountered in the war.

Edward J. Erickson, professor of military history at the Marine Corps University, gave a befitting description of the outcome of the failed Gallipoli campaign, while speaking at the commemoration at SUNY Maritime College. Jackson, who has been travelling to the peninsula with his students, said that "eternal friendship" among the three nations was born out of the Gallipoli campaign.

The landings at Gallipoli involved 70,000 men from the United Kingdom (including Scots, Irish, and Welsh), Australia, New Zealand and France (including North Africans). Indians, (including Pakistanis), Gurkhas, and Canadians soon followed. The Ottomans had a similar number of men, and their conscripted army included Turks, Arabs, Armenians, Jews, Kurds, and a number of smaller minorities. Germans and Austro-Hungarians fought alongside the Ottoman army. Roughly 60,000 allied soldiers were killed and a similar number of Ottomans died as well.

Britain had asked for help from her Commonwealth, and the selfless and immediate response was instrumental in the survival of the British Empire. Today, Australians consider themselves egalitarian, informal and irreverent. They have an image as a muscular and independent people, and they have become strongly nationalistic in their own right. This was a critical affirmation for the governments and peoples of the former colonies. Likewise, the campaign was important for the Ottomans as it served notice to the Western imperialist powers that the Ottomans were back in the game. The Turks inherited this legacy, and Gallipoli served as a sort of national turning point from being humiliated as the "sick man of Europe" to being known again as an opponent of some worth.

"In the years since the end of World War I, the Gallipoli experience and its remembrance became an important part of the building of friendly relations between the Turks and their former enemies. For many years after the war, it was not uncommon for British, Australian, and New Zealand veterans groups to visit the peninsula and join with Turkish veterans groups for commemorative observances. Turks, in reciprocation, went to London, Canberra, and Christchurch to pay tribute there as well," Jackson said. Old soldiers and their commanders forged strong friendships in the first half of the 20th century. Jackson also provided some interesting insights. "Given the brutal nature of trench warfare in World War I, how do we explain April 25 as a day of convergence rather than a day of wrath? The truth is that Gallipoli was a soldier's battle. It was not what is known as Materialschlacht (a war of armaments), characterized by millions of shells and hundreds of machines," he explained, describing it in Gen. Erwin Rommel's words as Krieg ohne Hass ("war without hatred").

Atrocities and war crimes were almost unknown on the peninsula. Amidst the violence in the battle, the soldiers of each side developed a grudging respect and admiration for their adversaries. "Johnny Turk" became a term of affection rather than one of derision, according to Jackson. While the battles there were brutal, they were not nearly as soul shattering or as punishing as those raging in France the same year. In the end, the casualties from the Gallipoli campaign numbered about a quarter of those from the Marne, Verdun and the Somme.

April 25, although an anniversary of war, it is indeed a day of convergence, and it brings people of different nations together, Jackson maintained.