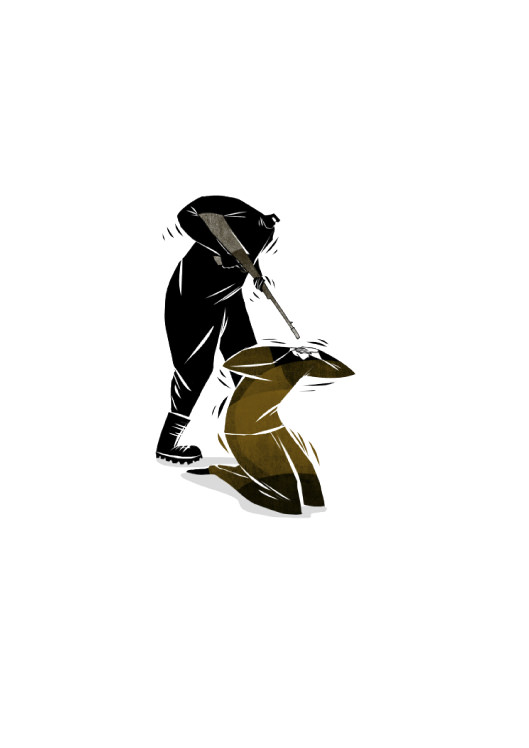 Iraqi government backed Shiite militias recently launched a series of attacks on a Sunni neighborhood in Baghdad. Unsurprisingly, this incident that has a potential to ignite another sectarian strife in the country received almost no coverage from Western media outlets

Scarcely reported in the Western media, and likely because no news in Iraq is news unless it involves the Islamic State of Iraq and al-Sham (ISIS) pillaging an ancient site, the sectarian Shiite-led Iraqi government and its militia allies made a series of dangerous moves toward the breakup of Iraq over the past few weeks. Not only did the Iraqi security forces stand back and watch as an entire Sunni neighborhood in Baghdad was attacked and set ablaze by Shiite militias, but the sphere of influence of small Shiite governorates were expanded geographically to encompass Sunni areas. Their actions are not surprising, but what is astounding is how little coverage such actions get, and when and if an eventual breakup of Iraq does actually happen, many Western observers will point to the actions of ISIS as the main reason, blind to the multi-faceted realities that have been conveniently hushed up by the mainstream media.

Last weekend, sectarian militias led by Shiite clerics attacked Baghdad's Sunni neighborhood of Adhamiya, and it was completely ignored by mainstream Western media outlets. Iraqi activists uploaded videos of the incident, which was captured by some local stations and Al Jazeera, but for some reason media giants such as the BBC and The Guardian decided that it was not compelling enough news. They cannot claim to not have known anything about it, particularly The Guardian, as I directly contacted them about the situation and offered them interviews with locals and other sources. The response I got was a vacuous silence, something that Iraq's Sunni Arabs are quite used to when it comes to "equal" and "fair" coverage of their plight. This silence comes even after I publicly confronted a senior Guardian editor during a conference in Qatar not two weeks ago about how stories involving crimes against Sunni Arabs are usually ignored or minimized.

If one was to type in "Adhamiya" into a Google search, using its various spellings, one would invariably find reference to an Iraqi restaurant in Doha named after the famous Baghdad neighborhood, a Wikipedia entry, and a smattering of articles that mention it in passing. Aside from an article I wrote almost a week ago about Adhamiya being attacked and burned, you will not find anything on the matter in any of the mainstream media sites. In fact, on the day that Adhamiya was burning, the main news stories were, unsurprisingly, about ISIS approaching yet more historical sites to commit further acts of cultural genocide. Even the comments of a Shiite Arab cleric hated by the Iraqi regime, Ayatollah Mahmud al-Hasani al-Sarkhi, who stood in solidarity with the people of Adhamiya, were ignored. Apparently, Iraqi Sunni-Shiite unity is not important and is not indicative of the fact that Iraq can be saved and kept together.

While ISIS's attacks on global heritage and history are undoubtedly important, I would argue that the livelihoods, properties and souls of the living are far more important and newsworthy than the artifacts of the dead. The fact that this is not the case shows just how far the Sunni Arabs have been dehumanized politically and socially with enormous help from the media, which does nothing to dispel the myth that all Sunni Arabs are in league with ISIS. The Western fetishizing of ISIS's sexual deviancy, cultural barbarity and savage atrocities absolutely reeks of Orientalist fantasies come true, and this is surely one of the main reasons why the media gives it so much of the limelight. Moderate, sane Muslims who have no problem living peacefully with others and who have been conveniently branded as ISIS terrorists in order to kill them with impunity are simply too boring and serve nobody's political agendas.

Similarly, the hardship and trials of Sunni Arabs in Anbar is not news, neither are Iranian attempts to create a new "Shiitestan" by using their sectarian Popular Mobilization Forces proxies and a subservient Iraqi government to change geographic boundaries and the demography of certain areas. Earlier this month, the Iraqi government announced that it is extending the territories under the administration of the Karbala Governorate, which is predominantly Shiite, about 140 kilometers southwest toward the town of Nukhayb. This seemingly obscure bit of news was entirely skipped over by all but, once again, Al-Jazeera and other Arab media sites. The significance of this story is that the Iraqi government's declaration not only preceded the virulently sectarian Popular Mobilization Forces from entering the town and frightening the locals half to death, but also because Nukhayb is a part of the predominantly Sunni Anbar Governorate, and the last Iraqi town before reaching the Saudi Arabian border. It also lies on a main road that leads directly to the Jordanian border, and even to Syria.

If the Iraqi regime is claiming to desire nothing more than to keep Iraq together for all Iraqis, why not just leave the boundaries and borders of the various governorates intact? Why risk angry remarks and antagonizing Sunni Arab chieftains and sheikhs who vowed to fight this change with force if necessary? Shiite pilgrims taking the land route to Saudi Arabia have been passing through this town in safety for longer than living memory. Yet the Shiite-led government, seemingly executing Iran's geostrategic objectives of creating a Shiite stranglehold over Saudi Arabia's northern borders and land routes, now deems it necessary to cut off the beleaguered Sunni Arabs' only route to Saudi Arabia. In the event of the appearance of federal regional governments, as in the Kurdish enclave in northern Iraq, or if Iraq were to be divided along ethnic and sectarian lines, Sunnis would thus be reduced to a stretch of barren desert. If such a state of affairs comes to pass, 100 Saudi decisive storms will do nothing to save them from an unfavorable security situation that threatens to swallow even their Shiite Eastern Province.

Iranian imperialism through the use of their Iraqi government and Shiite militia proxies at the expense of the lives and livelihoods of Sunni Arabs is not news. Sunni Arabs lynched and strung up on lampposts in Baquba is not news. Uninhabited Nimrud being destroyed by ISIS terrorists? Someone fire up the printing press and get the cameras rolling.
Last Update: May 21, 2015 10:52 pm
RELATED TOPICS