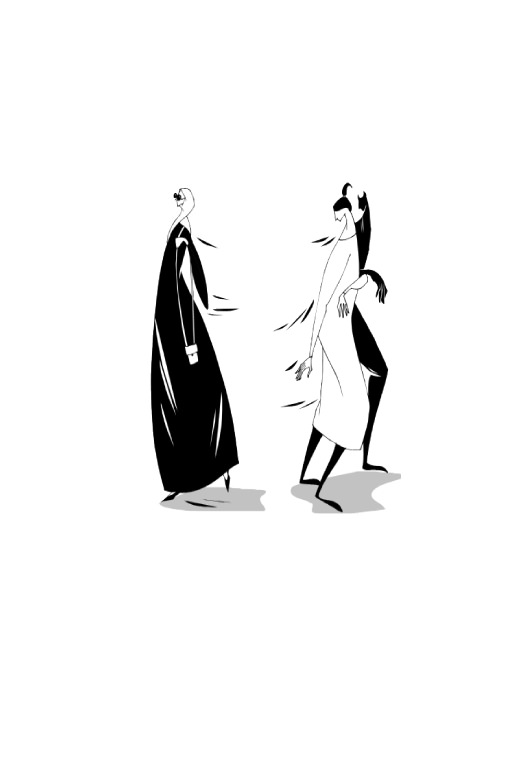 Today, every person and institution that claims to represent Islam and each American of any religion who tries to create peaceful co-existence has to find prudent ways to deal with the discourse of hatred posed by Islamophobia

Racism has made us paranoid, attempt to unite faith has divided us meticulously and sterilized us. For example, how right is it to hold a "Muhammad" cartoon contest? This cannot be a freedom of art or expression. This springs from fear. Fears we have of different faiths have brought us to be full of paranoia and hatred.

This is a quote from the book "Undivided: A Muslim Daughter, Her Christian Mother, Their Path to Peace" by Patricia Raybon, who is Christian, and her daughter Alana, who is Muslim. It is a true story recounting Islamophobia in the U.S. Even though CNN does not see it, the incidents that took place in the torched city of Baltimore in the U.S. state of Maryland after the death of Freddie Gray, a black man, is no longer on our agenda. In the city of Dallas, Texas, an armed conflict took place outside a hall in which a cartoon competition of the Prophet Muhammad organized by the American Freedom Protection Initiative (AFD), an organization that has come to be known for its anti-Islamic acts. Elton Simpson and Nadir Soofi who carried out the attack, posted on Twitter: "My brother next to me and I have dedicated ourselves to the commander of the believers. May Allah accept us as mujahedeen. Pray #Texasattack," from an account named "Shariah is Light," 15 minutes before the attack. The term "Commander of the believers" is used to refer to Islamic State of Iraq and al-Sham (ISIS) leader Abu Bakr al-Baghdadi or Taliban leader Mullah Mohammed Omar. Although the messages posted on Twitter can be interpreted that Islamist militants may be held accountable for the attack, White House spokesman Josh Earnest said that even though it may be offensive, there could not be any expression to justify the attacks and that the President Barack Obama's administration is not ready to accept that ISIS operates on U.S. soil. However, ISIS had announced on their own radio station that they organized attacks on U.S. soil for the first time and warned there would be worse attacks.

On the organization's web site after the attack, statements that the competition "supports freedom of expression and that Americans cannot be intimidated by those who use violence in the name of Islam" were posted. You may not have heard of the cartoon exhibition regulator Pamela Geller's name before the tragic attack in Texas. Even though she says that she exhibits a bold stance for freedom of expression and while supporting these supports the US, she is known for her anti-Islamic activities and discourse. American Freedom Advocacy and Stop the Islamization of America Initiative (AFD) president Geller has a book titled "Stop the Islamization of America: A Practical Guide to the Resistance." Geller, who is a well-known American conservative, is known throughout the U.S. for her anti-Islamic actions. Geller commented on the attack in Dallas as "an attack on freedom of expression," and said: "What do we do? Will we surrender to this monster," while claiming that the war in the Middle East had sprung on the U.S. and said: ''War is here." The fact that Geller, instead of calling for dialogue, mutual understanding and union, says "this is war," shows that it was just the last part of the long list of events that combines the provocative nature of freedom of expression and the attack against Islam. Also, the fact that the statement Geller made after the attack drew attention. It is claimed in the U.S. media that Geller is using her freedom of expression in a provocative and offensive way, and that even though she is claiming to defend American values, the views that her actions were harming said values drew attention. It was pointed out that Geller did not "get the sense of personal purpose in life, a person with negative incentives" indicating that, "she loves to act. Has a harm-loving nature." In the news in the Washington Post about Geller, the statement: "If the competition is a trap, it has reached its purpose" was used. It has been declared that the intention of the competition was disrespect and even bigotry.

Geller stands as a figure arguing that Hitler was influenced by Islam and that the Islamic world spreads fear and violence to the human race. Geller, who earlier campaigned to prevent the establishment of the Islamic center near the World Trade Center, published advertisements such as: "Be for the civilization in the war between barbarians and civilized people, support Israel," and: "Defeat jihad," against Islam on many public transport vehicles in the city, and argues that Muslims pray for Christians and Jews to be cursed. Voicing on every platform that Obama is also Muslim, Geller believes that the U.S. has surrendered to Sharia.

Muslim organizations in the U.S. reacted to Geller. One of the leading Muslim nongovernmental organizations in the U.S., the Islamic Relations Council (CAIR), urged all Muslims to not react to the competition so as not to promote the organizers prior to the competition. CAIR National Communications Director Ibrahim Hooper also said that hate crimes are not only limited to Texas. In the U.S. there were other states in which similar hate speech could be found, and that Geller, by "using her right to freedom of expression in a precisely provocative and offensive way," was consciously being provocative. However, CAIR has opposed the attacks unquestionably and has said that they need not apologize for something Muslims did not do. It should be declared that those carrying out attacks of violence are not associated with American Muslims or those living in the Middle East. There is no case that supports this type of violence in Islam. No matter how provocative the competition organized by Geller and how it, without question, passes to hate speech, does not require a violent response to it. Although in certain parts of the U.S. constitution the regulations on freedom of expression, diversity of opinion between the U.S. and other countries are not very clear, there is no debate about the first amendment. Upon the conviction of a Ku Klux Klan leader, the U.S. supreme court stated that a constitutional rule had been implemented flexibly. As long as another rule is not violated and the inviolability of movement is not disrupted, even hate speech is protected under freedom of speech. Recently, Muslims are confronted with hate speech that is protected in the U.S. constitution. We are faced with a legal debate upon Geller pushing the boundaries of freedom of speech and expression.

Two institutions run by Geller are described by the civil liberties organization advocate the Southern Poverty Law Center as hate groups. Geller was not allowed entry to the U.K. in 2013, where she came to participate in the actions of an extreme right-wing group. Another fascinating point is that another provocateur of the contest, the Dutch extreme right-wing Freedom Party (PVV) leader Geert Wilders was also forbidden to enter the U.K. Wilders, one of the founders of Stop the Islamization of Europe (SIOE), is known for his hostility toward immigrants and Islam in particular, and argues that Islam is a bigger problem than the economic crisis for Europe. Wilder has said: "To solve the problem, it must be accepted that Islam is dangerous, totalitarian and a fascist theology," "We will continue to fight for Islam-free Netherlands" and is on al-Qaida's hit list due to the attention he drew from his anti-Islam film "Fitna." Wilders has said that Islam threatens freedom, that Muslims do not have the humanism that Christians and Jews have, and that the basis of the problem stems from the Quran. He is one of the forthcoming Islamophobic actors. Saying that ISIS "sees the Quran as the constitution," he puts into circulation the rhetoric that "terrorists are cutting the heads off of the people based on the Quran". Wilders, who has radical proposals such as taking special taxes from women who wear headscarves and banning the Quran, has claims that depend on no scientific data that the Netherlands is made into a criminal country. Advocating the prevention of immigration from Muslim countries across Europe, Wilders and his party want to take tougher measures against immigrants and state that they come together for "more security, less migration to lessen Islam." Wilders is one of the biggest oppositions against Turkey's membership in the European Union in the Netherlands and has arguments such as if one day "Turkey enters the EU, the Netherlands must leave the EU."

In a provoking speech, Wilders said that Islam would never manage to prevent freedom of speech. He argued that Islam aims to abolish freedoms and since he revealed the truth about Islam, his name was put on death lists by many Islamic organizations. He said that he was put on trial because he spoke against Islam whereas ISIS sympathizers live comfortably. Saying that there are weak leaders in Europe and even in the U.S., they will switch the play through new leaders. He said that Huntington's "clash of civilizations" view was mistaken and the clash was actually between pure barbarism and civilization. He has said that moderate Muslims exist, but there is no moderate Islam. He has said that Islam should go extinct since most of the terrorists are Muslims despite the fact that not all Muslims are terrorists. Alleging that Muhammad was the leader of a group of thieves and a murderer, he purported that as the source of inspiration of the current terrorists and ended his speech saying that the barbarism of Islam will not be submitted to.

Being unable to digest Muslim's living peacefully and in harmony in the U.S., some circles took the action to trigger Islamophobia. The rise of Islamophobia, which became visible with 9/11 frightens Muslims. FBI reports show that there is a considerable rise in hate crimes against Muslims. Islamophobia constitutes the essence of Western culture and manifests itself as a part of the conscious state policy of control and submission. It is explicit that certain institutions finance Islamophobia. Islamophobia is seen in the mainstream media, statements and policies of statesmen and politicians and practices of security forces as a reflection of the European-centered mindset and a part of Western historical heritage.

We know that Islamophobia was produced to feed a huge market. Islamophobic groups use every means they find to communicate their hate-filled message to the masses. Politicians, wise men and opinion leaders ought to take the issue seriously and work on long-term plans. Muslims also have to be careful while the Islamophobia market produces hatred. In an atmosphere in which ordinary Muslims are labeled "secret jihadists," Muslims should abstain from playing into the hands of anti-Islam campaigns.

The strength of civil society and broadness of freedom of speech provide important opportunities. Every person and institution that claims to represent Islam and each American of any religion who tries to materialize peaceful co-existence has to find ways to deal with the discourse of hatred. By cooperating with the groups that work on civil rights and groups trying to prevent hatred, making Muslim friends and neighbors and initiating anti-Islamophobia campaigns, it should be shown that Islamophobia is not fear of Islam, hatred and prejudice of Islam. Muslims and their partners should tell societies that Islamophpbia is a hateful discourse, and every hateful discourse is wrong. It is not only the problem of Muslims, but also Christians, Jews and the whole of humanity.