The neocolonialist tactics of The New York Times 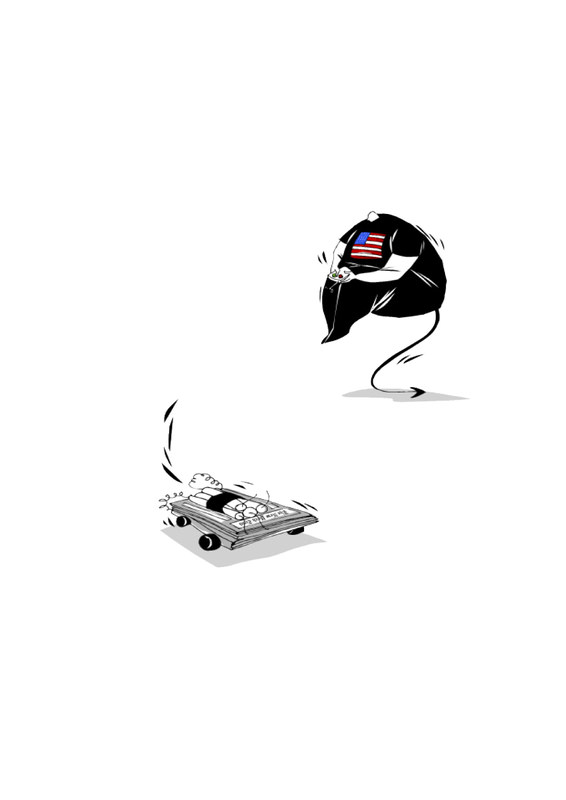 Articles published in the NYT on the affairs of other governments can be seen as propaganda in the service of American foreign policy, a neocolonialist interference with political developments in other states

Turkey is under a soft-power attack by America, and weapon of choice is an old one: The New York Times (NYT). Turkey is the target of American soft-power attacks because its hard-power significance to the U.S. now comes with strong Turkish leadership. Washington wants to affect Ankara's decision making, but knows that it is now dealing with a Turkish government that is exceedingly independent of external control. Being that the U.S. government cannot simply tell the Turkish government what to do, there is a heightened sense of an American effort to put pressure on Turkey by influencing public opinion about Turkey's leadership. Even when the act of coercing another government is replaced by an attempt to co-opt its people, it is nonetheless an attack on a country's sovereignty.

Through the NYT there is an American ability to reach a Turkish audience and try to lead Turkish events in a particular direction. Due to American dominance around the world, the NYT has become a household name internationally. This newspaper enjoys a high level of prestige because it is a familiar brand. Its renown is often mistaken for credibility. However, once the articles published by the NYT on the affairs of other governments are seen as propaganda in the service of American foreign policy, then it becomes apparent that the U.S.'s use of the NYT to interfere with political developments in other states amounts to neocolonialism.

On schedule to tamper with the upcoming elections in Turkey, the NYT recently published two articles that were designed to create doubt about the legitimacy of Turkey's ruling party, and in particular President Recep Tayyip Erdoğan. On May 22, under the title "Dark Clouds Over Turkey," the editorial board of the NYT characterized Erdoğan as an intimidator and depicted Turkey's current mood as dark and fearful. On May 24, an opinion article by Sergei Guriev and Daniel Treisman, "The New Dictators Rule by Velvet Fist," placed Erdoğan on a list of threatening dictators in the company of Russian President Vladimir Putin and former President Hugo Chávez of Venezuela, and described the Turkish government as one of several continuers of the totalitarian systems of the previous century, led by Adolf Hitler, Mao Zedong and Joseph Stalin.

Going by the most common understanding of neocolonialism, the NYT is guilty of it. In its most basic sense, as defined by Kwame Nkrumah, Ghana's famous leader in the 1950s and 1960s, neocolonialism means the choice of a foreign power to exploit a country rather than let it develop freely. In the early 1980s, political scientist Stephen Shalom articulated even further that neocolonialism is the result of "an alliance between the leading class or classes of two independent nations which facilitates their ability to maintain a dominant position over the rest of the population of the weaker of the two nations." The contact between the American elite that is behind the NYT and the Turkish elite that is against the AK Party government is a textbook example of neocolonialism.

In the Bandung Conference that was hosted by Indonesia in April 1955, 29 states from Africa and Asia already declared that "colonialism in all its manifestations" was an evil, and they made an appeal to foreign powers, especially the U.S., that they would abandon tactics of "subjugation, domination and exploitation." Turkey was among the participant states as were North and South Vietnam and Cambodia, before the resistance to neocolonialism led to the American destruction of millions and the socioeconomic structure in Southeast Asia. The list of participants also included Middle Eastern countries such as Egypt, Iraq, Syria, and Yemen, whose societies are now struggling due to divide and conquer approaches in service of foreign interests. The plea for freedom from American interference with their internal affairs, "whether by force or by infiltration," was evidently denied as the plea against domination seems only to have led to greater sophistication in the weapons employed by the U.S. against these peoples, be it through hard or soft power.

While the connection between the growing technological sophistication of the American force and its capacity to dominate other countries is clear, the development of American co-optive power has been less observable. According to political scientist Joseph Nye, the power to co-opt "is the ability of a country to structure a situation so that other countries develop preferences or define their interests in ways consistent with its own."

By having this ability, media outlets such as the NYT have managed to turn around arguments against American neocolonialism. If a government that is aware of the long history of interference with its internal affairs takes action to limit the ability of a foreign power such as the U.S. to co-opt its own nationals, the American response would be to use its control of global information in order to accuse that government of being a threat to freedom. It is because of the American threat of interference in the internal affairs of others that other governments cannot meet the American standard of democracy.

It has to be said that the myth of the free press in the U.S. has diverted attention away from its element of information control. These two recent articles in the NYT, while seen as separate from the penmanship of U.S. government officials, are doing the government's bidding. They gain credibility by giving the appearance of a critique of U.S. policy on Turkey, but are actually looking to mobilize public opinion to be in favor of an agenda that is already favored by U.S. policy makers, which involves meddling with Turkish affairs.

The recent articles criticizing Erdoğan and the AK Party are modern-day versions of the anti-Turkish and anti-Muslim content that appeared frequently on the pages of the NYT during World War I. While to the American public the sensationalist vilification of the Ottoman government was presented as honest reporting, behind the scenes these reports were the product of correspondence between James Bryce and the NYT editorial board. Bryce was designated by the British Foreign Office to lead the propaganda efforts in the U.S., and through his deep connections, Bryce was able to cooperate with the NYT and others in the U.S. media to prepare the American public for war against Germany. The political Armenian question that had been raised by Bryce several times before 1915 was raised yet again in anticipation that the American public would support its government's entry into the war once it appeared that Germany was siding with Muslims against Christians.

To this day, the distorted information on what happened in 1915 is used by genocide scholars in their biased selection of sources. Their misuse of the term genocide, as part of the discourse control that American-influenced academic institutions afford them is also a tool of colonialist endeavors as it is designed to focus on reactions of local governments to certain crises without regard to the interference of great foreign powers that had created these crises.

By careful de-contextualization, the American press and academia rewrite history and current affairs. The power to persuade does not ride on the virtue of the argument alone, but also on the ability to reach minds in the first place. There is no avoiding the fact that the NYT can reach many minds and be influential, but it is important to be mindful of the meaning of a soft-power campaign against Turkey. Be it the old image of the unspeakable Turk or the new image of a threatening Erdoğan, these are the work of a terrible tactic.