The virtue of democracy 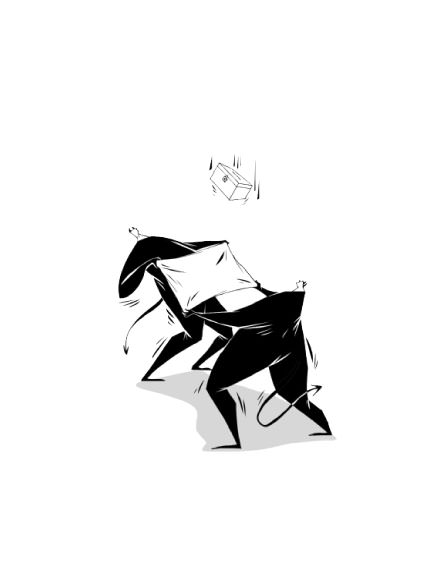 On June 7, the electorate compelled politicians from various backgrounds to join forces in order to curb polarization. Meanwhile, certain people came to appreciate the country's democratic credentials only after the results served their interests

The Justice and Development Party (AK Party) won nine consecutive elections - three parliamentary elections, three local elections, two constitutional referendums and one presidential race - over the past 13 years. Each time, the movement was able to expand its voter base and further distinguished itself from its competitors. The emergence of the AK Party as a hegemonic party shook the confidence of Turkey's secular urbanites in the electorate and the nation's democracy. As a matter of fact, members of the above-mentioned social groups had maintained a certain degree of skepticism toward popularly elected governments. Deep inside, they held the view that the people lacked the crucial ability to criticize and question official practices. Demonstrating authoritarian and totalitarian tendencies, they reasoned, the electorate voted against its best interests and picked the wrong candidates. Commentators who adopted this line of thinking had the perfect answer to the question of why the AK Party remained popular: The people lacked a democratic consciousness.

The secular-minded urbanites explained the people's support for the AK Party with reference to obedience. The party's supporters, they reasoned, were essentially a herd. They believed Recep Tayyip Erdoğan's every word and followed his lead regardless of the consequences - which placed pluralism and democracy out of reach. Democracy, in turn, could not be reduced to the ballot box: There was no point in making a big fuss about election results. Certain political commentators even suggested that it would be legitimate for extra-parliamentary forces, in particular the military, to overthrow the government if the AK Party secured the parliamentary majority for another term in 2015. Ahead of the June 7 elections, opposition leaders repeatedly suggested that election security was at risk. This argument, which was quickly picked up by international media outlets, evolved into a major campaign. The AK Party would mobilize the bureaucracy to manipulate election results and win the election. During the lead-up to the election, commentators at home and abroad made the most of this juicy story, which became more and more interesting to an audience that needed no persuading.

The argument that the incumbents would commit election fraud was completely baseless. No one would argue that Turkey's democracy is flawless, but the country had made democracy work for 65 years against all odds - and a handful of military coups. Even under martial law, the strongly institutionalized electoral system had made it possible for the people to disagree with the military and change the government as they pleased. Judicial oversight over elections, constant monitoring by a variety of political parties, the emergence of grassroots movements to follow the vote count and recent developments in communication technologies, furthermore, made it impossible for the authorities to commit election fraud. The claim that the Justice and Development Party would commit election fraud was, in fact, a convenient excuse to cover up the opposition's shortcomings and cast a shadow of doubt over the elected government's legitimacy. Had the incumbents performed better, opposition leaders would have argued that the election was rigged and, therefore, illegitimate. "The AK Party cheated to win the race," pundits would claim. A clear sign of the emerging AK Party dictatorship, others would say.

Hours after the vote count began, however, it became clear that the opposition had been wrong all along: First and foremost, the people, whom certain groups had accused of stupidity and unquestioning obedience, expressed their dissatisfaction with the ruling party. Where the military failed, the electorate triumphed: A small group of voters turned away from the AK Party and, through legitimate channels, paved the way for a new government.

Upon firing a warning shot to the AK Party, the people came to be appreciated by the opposition parties. Overnight, those who frowned on the ballot box started to celebrate the electorate's wisdom. "The people have spoken," pundits said. "And all parties must respect the election results." Others, who were quick to accuse the people of helping establish a dictatorship ahead of the contest, discovered the value of common sense. On June 7, the electorate compelled politicians from various backgrounds to join forces in order to curb polarization. Meanwhile, certain people came to appreciate the country's democratic credentials only after the results served their interests. When it became clear that the AK Party would not be able to form a single-party government, allegations of election fraud instantly disappeared. Election security was not compromised and the Election Authority announced unofficial results within hours. It was particularly interesting that those who made the allegations ended up celebrating the results most passionately. The lack of notable objections to the results established that charges of election fraud had been baseless all along.

Each election cycle witnesses the growing popularity of certain political parties, while others end up disappointed. In light of the election results, pundits identify winners and losers. Since the 2015 parliamentary contest, much has been said about the reasons behind each party's performance. There is a good chance that a number of detailed analyses will surface within the few next weeks, which will help each movement to start preparing for the next election.What the June 7 elections established, however, was that the people were certainly not ill-informed. Apparently, nor did the AK Party owe its landslide victories to election fraud. Experts also came to terms with the fact that Turkey was not headed toward a dictatorship. The country's democratic institutions proved capable of pulling it in despite its most ardent critics. In light of the above, Turkish democracy and parliamentary politics were the true victors on June 7.
Last Update: Jun 22, 2015 11:34 pm