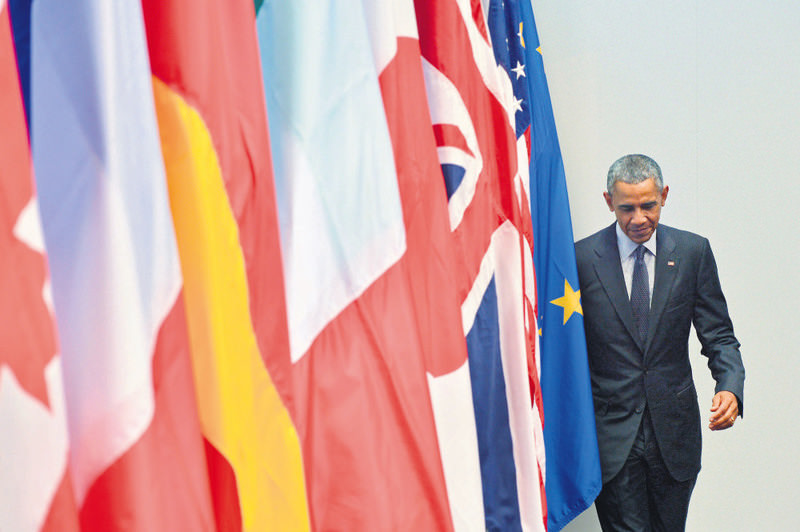 President Barack Obama arrives for a press conference at Elmau Castle near Garmisch-Partenkirchen, southern Germany at the end of a G7 summit.
by Necmettin Özdin Jul 01, 2015 12:00 am

During the G7 summit, member states have strongly demonstrated their need for an effective global government in which international issues and threats can be addressed collectively through common platforms

Ian Bremmer says "Once upon a time" in his article entitled "Here Are 5 Reasons the G7 Summit Was a Disappointment" published in Time Magazine, ". the G7 countries ruled the world. Today, not so much." The G7 Summit 2015 was held in Bavaria, Germany, on June 7-8, 2015, with the participation of the seven leaders from Germany, Great Britain, France, Italy, Japan, Canada and the U.S. This was the 41st and may be one of the lowest-grade diplomatic events due to its disappointing outcomes. The motto of this year's summit was "Think Ahead. Act Together."

Following key issues on climate change, the global economy, (energy) security and development policy, the summit emphasized the responsibility to shape our planet's future through core principles agreed upon: freedom and human rights, democracy and the rule of law, peace and security, prosperity and sustainable development. Another message from a community of shared values was addressed to Russia: "The heads of state and government of the G7 do not accept the Russian Federation's illegal annexation of Crimea. As a community of values, they have therefore decided to hold their meetings without Russia until further notice."

German Chancellor Merkel said that Russia couldn't currently return to the Group of Eight. In an interview, she also declared that Russia, by annexing Crimea, had gone against the common values that made the G7 a community of responsibility. In this sense, there is no surprise that sanctions will remain in place and that the crisis in Ukraine will continue as well. Although Russia has no relations with G7 members, Russian President Vladimir Putin Russia said, "If our partners want it, we will be developing active relations with any of the G7 countries on a bilateral basis," following negotiations with Italian Prime Minister Matteo Renzi on June 10, and added, "After all, this is not an organization, but something like a club."

Our biggest issue, ISIS, came to the table only with President Obama's concluding remarks at the conference, saying, "We don't yet have a complete strategy because it requires commitments on the part of the Iraqis." However, he said, "We want to get more Iraqi security forces trained, fresh, well equipped and focused," and added, "We're reviewing a range of plans for how we might do that, essentially accelerating the number of Iraqi forces that are properly trained and equipped and have a focused strategy and good leadership."

Stephen M. Walt posed an essential question in Foreign Policy magazine regarding a possibility that has the potential to re-draw the Middle Eastern map: What should we do if ISIS wins or becomes a real state? The missing point from the beginning is that ISIS is still being seen as a regional issue. However, it has already gone far beyond this with a fighting force of over 20,000 foreign fighters from over 100 countries that makes it a global threat. ISIS now controls over 50 percent of Syrian lands and is targeting further areas. As the Obama administration wishes it would be reversed by regional actors trained and equipped, the Iraqis and all others cannot solve the world's problem, which is called ISIS.

In the late 1960s, the world economy, which was dominated by the Keynesian paradigm, experienced turbulence and a dramatic political-economic transformation, with the 1970s following the breakdown of the Bretton Woods System by President Nixon in 1971. This also marked a time when the U.S. post-WW II hegemony was challenged in every aspect from the economy to the military in Cuba and Vietnam. Starting in 1975, the six advanced capitalist states - from U.S. President Gerald Ford to German Chancellor Helmut Schmidt -- became the elite G7 group in 1976 by inviting Canada to the summit. When the G7 invited Russia to a summit in 1991, the end of the Cold War was almost announced. With official full membership in 1998, Russia became a strategic member of the organization. Then, the G8 with its economic, military and diplomatic capacity began to exercise enormous influence and power on the policies and decisions of multilateral global institutions from the U.N. Security Council to the World Trade Organization (WTO), the International Monetary Fund (IMF), the World Bank and the Organization for Economic Cooperation and Development (OECD).

Experts argued the G8 couldn't be effective and influential with regard to global issues without accepting the world's emerging powers as members. This is why President Sarkozy declared that the group should re-design itself as a G8 plus five - China, India, Brazil, Mexico and South Africa. Then, with the collapse of financial markets in 2008, the group re-established and transformed itself into the G-20 summits of heads of state or governments together with finance ministers and central bank governors. The ultimate purpose of the G7/G8/G20 is to represent a crucial policy-making process on economic policy issues as well as political and security matters at an international level. This aim refers to global governance in managing global economic stability and maintaining the liberal international order through the support of great powers.

As noted by Bremmer: "In 1980, the G7 countries accounted for 61.1 percent of world GDP and roughly 13.85 percent of the global population. Today, the G7 countries are only responsible for 46.3 percent of global GDP output and house 10.5 percent of the world population. And these numbers are on course to continue their decline." The only key issue for the G7 group hegemony in being a global actor once again is to face the challenges by adding new candidates into the group like China and Turkey, which would bring the group back to an over 60 percent share of world GDP.

Being discontent with the current international system dominated by the U.S., China, on the other hand, already began adopting its own separate path with several initiatives, such as the establishment of the Asian Infrastructure Investment Bank (AIIB) instead of being a player in the World Bank and the New Development Bank, which plays a role similar to that of the IMF. As in the post-War settlement in the Pacific, it seems that China aims to follow a similar strategy through establishing institutions and regimes to expand its sphere from a regional to an international level.

While some argue that the group would be a global actor representing the whole world by including China, some others assert that adding China as an authoritarian one-party-rule regime would change the elite and western characteristics of a group that defines itself on the basis of liberal values. Without being a global platform, the group, including seven wealthy industrialized nations, will not manage global affairs - security, economic, environmental and regional disputes as well. From the onset of the financial market disaster in 2008 to date, the group has failed to bring solutions to the set of economic and political issues since it could not lead to addressing the crisis and failing of global governance.

What we actually need is not a global government that is merely a dream in this period, but rather our world's problems indicate the requirement of a global architecture in which both regional and international issues and common threats are being discussed on a legitimate, institutional and universal level. This first and foremost would require this G7/G8/G20 and all other organizations from the U.N. Security Council to the IMF and World Bank to re-establish themselves as an institution rather than annual meetings.

The facts -- both regional and global -- indicate that we no longer live in a G7-dominated world. As Gramsci noted in his "Prison Notebooks," "The crisis consists precisely in the fact that the old is dying and the new cannot be born; in this interregnum a great variety of morbid symptoms appear."
Last Update: Jul 01, 2015 9:56 pm
RELATED TOPICS