Who are the real ‘terrorists?' 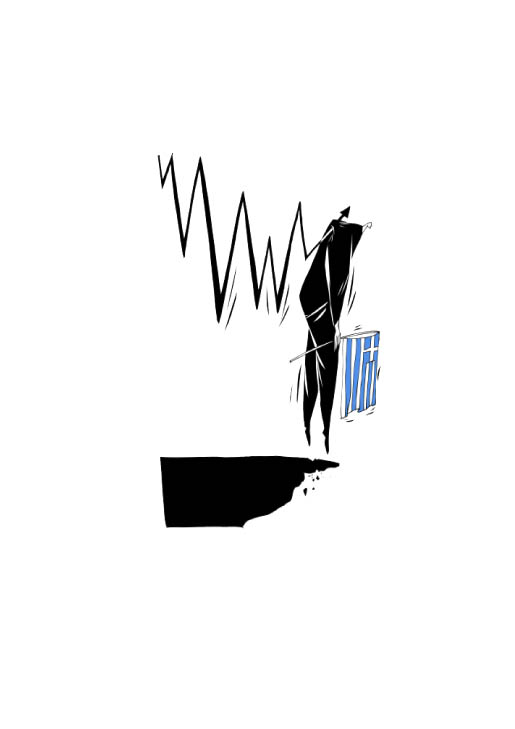 With the EU foreseeing little confidence in the Greek government regarding crisis management, bitter times await the Mediterranean country following the referendum. Its withdrawal from the EU's financial domaindoes not promise any hope either

Greeks often love to go on about their ancient history and culture. Indeed, it is often heard at dinner parties in Athens among the few middle class people left that "we were performing plays while the English were still living in caves." Yet democracy, although overrated and not everyone's cure for dodgy governance, is not exclusively the domain of the Greeks - and it should be noted by its present charismatic leader whose tactics have led to the calamity of the economy plunging deeper into darkness. Greece's own finance minister Yanis Varoufakis, a self-styled maverick who wears casual clothes and rides a large Yamaha motorcycle, has resigned, leaving the media limelight charged with umbrage about the Brussels negotiators being "terrorists" - a reference that he will regret in his older years when his grandchildren point out the blatant oxymoron, in that terrorists usually don't lend you $240 billion to patch up your spiraling economy. And that's just the two bailouts from the IMF, not even what European banks stumped up. But no matter. In total, Greeks are in debt to the tune of around $330 billion, but the crisis now has reached a point where its government is borrowing just to service debt, which politically is like shooting yourself in both feet and then complaining about the cost of leather shoes.

The pundits have argued that his resignation was a cunning tactic by the prime minister to go back to the negotiating table in Brussels and present a slightly re-jigged deal without the bald biker and hope that the political maneuver will win the day. And it might just, for the simple reason that it is not only Greece that is drinking in the last chance saloon but also the EU. A "Grexit" - Greece leaving the eurozone - has far too many damaging implications for eurozone countries, and is in fact not really an option for Brussels, even if their spoon-fed journalists in the Belgian capital are happy to write up the tough talk as they scurry out of the midday press briefing to dine in the fine restaurants near the Berlaymont building in Brussels, gazing at the press releases as they fatten themselves on the gravy train of the EU. The Greek government says the referendum result means Europe should modify the bailout terms. And you have to admire the Greek prime minister's verve as he demands both debt relief and an end to austerity. Federalist Europeans argue that this makes sense, as it might calm the eurozone and give the Greeks what they need to rebuild their economy. In the longer term, it might even be a PR coup for the EU's executive in Brussels as the European Commission would gain some desperately needed credibility from one end of Europe while kicking the eurosceptics where it hurts, in the other end, namely the U.K.

It's hard to see that without debt restructuring, Greece stands little hope if any of getting back on its feet. But it is really choosing a long and tough road to get there. Politically speaking, a deal with Brussels might have been easier if the Greek prime minister had not rattled so many of those who live in the same eurozone countries who had shelled out taxpayers' money to save Greek banks. Those countries, Tsipras might note, have strong and accountable democracies with governments which need to account to taxpayers where the money is going and what it is going to be used for. For this alone - Tsipras insulting the Germans by restoring the embers of World War II and mocking the Italian economy - the idea of any of the debt being written off is simply out of the question, and not because of the petulance of those countries, but sheer the political savvy. And then to annoy the EU by constantly meeting the Russians - as Tsipras is doing today - is making any wiggle room on his side harder and harder. Aside from Russia, the only two countries in the world that seem to admire the firebrand tactics of the young prime minister are the U.K. and the U.S. - neither of which stand to sustain any real impact of the Greek economy imploding. In fact, in the case of the U.K., David Cameron's small core of eurosceptics would probably love nothing more than if Greece is hung out to dry in the scorching sun, then a return to its own sovereign currency and the possibility of leaving the EU altogether both present themselves as very realistic avenues to explore.

But not so fast. We're a long way from a "Grexit" yet as eurosceptic commentators often fail to point out that for Greece to leave the eurozone, two key components need to be in play: Both the full agreement from Brussels and the Greek government and recent events have shown that neither camp really wants that. Despite some EU member states floating the idea, the EU executive in Brussels knows better that the political implications for the EU could be devastating; it could even mean the end of the 28-state single-trade block, as while the euro itself would take a hit on the markets, politically, it would be the European Commission's own credibility with voters that would be the silver bullet for eurosceptics.

It's not Greece that will be the focus and that is worrying the experts in Brussels. It's how the other wobbly eurozone countries will be effected. Will Ireland, Portugal and Spain consider the option of an exit too? Ireland perhaps not, but Dublin might want better conditions on its own payback terms for its own bail out. Spain and Portugal are a different matter, as since 2012, a return to the Spanish peseta has been a very real option there as international markets (in South America), which Spain once dominated, could be once more seized with a new currency and a new momentum; Madrid's adoption of the euro was the most political, and from an economist's point of view was illogical. It simply wanted to be part of the Brussels pack and clean up on grants and take a stronger role on negotiating better deals for Spain. But entire towns in Spain that have been abandoned and an economy that has pulled itself from the abyss to "survival" status still makes it ripe for an exit if Greece were to pull out. And the domino effect is well understood by European political leaders who see a united Europe as an imperative. For most, even an exit that has precautionary measures in place to prevent any knock on effects, is simply unthinkable. Brussels high flyers don't like leaps in the dark.

Many experts point out that leaving the euro currency union and the EU could also be a legal nightmare that no country has yet tried. There are also no provisions for departure, voluntary or forced, from the euro currency union as when the euro architects got together in the late 90 - a French civil servant aristocrat you've never heard of called Yves de Silgey, Luxembourg's prime minister (who was later to resign as EU commission president under a cloud of corruption allegations) and, don't laugh, France's sex-mad former finance minister, Dominque Strauss Kahn - simply couldn't imagine any problems. And so therefore did not sketch out any contingency plans. This is Brussels arrogance at its finest. The alarm bells should have been heard in Brussels a long time before the financial crash in 2008 in the U.S. as Greece announced in October 2009 that it had been understating its deficit figures for years, raising alarms about the soundness of Greek finances. Until then, the Greek solution to its problems was simply to borrow.

But suddenly, Greece was shut out from borrowing in the financial markets. By the spring of 2010, it was edging towards bankruptcy, which threatened to set off a new financial crisis. Yet the EU, by now, only had one solution, which was to follow the Greek one; it decided that all it could do was to lend Greece larger sums of money to stabilize the problem and try and prevent contagion. The so-called troika - the International Monetary Fund, the European Central Bank and the European Commission - issued the first of two international bailouts for Greece, which would eventually total more than $264 billion at today's exchange rates.

But the bailouts came with conditions. Lenders imposed harsh austerity terms, requiring deep budget cuts and tax hikes, also requiring Greece to overhaul its economy by streamlining the government. Now debt restructuring is the only way out of the present stand-off getting out of control in Brussels. Both parties are playing a game of chicken, knowing each side cannot afford the "Grexit" for different but equally valid reasons. This is the heart of what the Greek prime minister is trying to leverage: He wants to make the Europeans feel the heat of the European project spiraling out of control like the Greek economy and make its big guns feel guilty for letting Greece get to the state it is in now. It's the ultimate Mexican Standoff as, not only is a "Grexit" not something the EU (or any member state for that matter ever contemplated), but also never before have we been in a situation where the EU is actually threatened by a rogue state that is prepared to carry out an act of terrorism for its own political legacy.

The problem is that bailout money mainly goes toward paying off Greece's international loans, rather than making its way into the economy, with some estimates claiming that only 9 percent makes it to the latter. And the government still has a staggering debt load that it cannot begin to pay unless a recovery takes hold. Greece desperately needs an upturn, no matter how small, and its only hope now is its negotiating skills as, despite the Eurosceptic press quoting the EC President Jean-Claude Juncker as talking about Greece's exit, the smart money knows that the uncharismatic Luxemburger, who had a habit of planting questions in press conferences when he was the eurozone's "finance minister" before taking the EC post, is bluffing. Just look at the statements today from Europe's giants, France, Germany and Spain. None of their leaders quoted by the press talk about anything close to a "Grexit". Quite the contrary in fact, with Spain underlining the point that Greece should stay in the euro; Germany's leader, Angelina Merkel, however, gives a clue as to where the talks now are leading: no bail out, but a re-jigging of the present terms which might give Greece the break it needs on a day when Asian markets took a body blow, the euro itself fell considerably against the dollar and a bald man that no one can name resigned, calling the EU mandarins "terrorists."
Last Update: Jul 07, 2015 9:56 pm
RELATED TOPICS