As ISIS strolls into Ramadi... 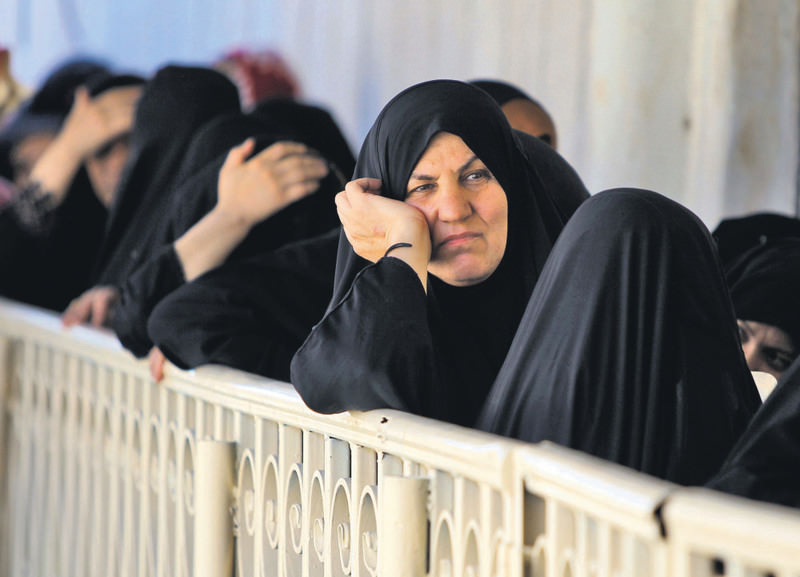 Iraqi refugees who fled Ramadi, after it was seized by the ISIS, await their turn to receive iftar meals during the Islamic holy month of Ramadan.
by Bashdar Pusho Ismaeel Jul 08, 2015 12:00 am

Although ISIS is beaten back in Syria with the U.S.-led coalition airstrikes, the organization still holds key positions in Iraq as Ramadi now shares the same fate with Mosul and suffers from ISIS brutality

The Islamic State of Iraq and al-Sham (ISIS) storms into a key Iraqi city, the state forces are routed leaving their weapons behind, refugees flee in their thousands in sheer panic, hundreds of slaughtered bodies dot the streets and a sense of panic reverberates across the region. All this sounds very familiar. However, this is not June 2014, but a full year later. The fall of the symbolic Sunni town of Ramadi has assumed the same fate as Mosul and other Iraqi cities, just when ISIS was supposedly in retreat and weakened by months of U.S.-led coalition airstrikes.

The fact that Ramadi suffered such a similar fate to other cities in 2014 shows that the Iraqi political, sectarian and military scene has not shifted a great deal 12 months on. Until Baghdad addresses these common ailments, the fight against ISIS will merely drag on.

The Iraqi army continues to lack the real ingredients, not a lack of training and arms, but willpower and motivation, which the much smaller ISIS forces show in abundance. Why do ISIS forces struggle in Kurdish-dominated areas or Shiite strongholds around Baghdad and yet seem to make steady gains in Sunni areas? This is far from a coincidence. The disenfranchised Sunni population was not sufficiently enticed into the political fold after suddenly playing second-fiddle to the Shiites after the overthrow of Saddam Hussein with Iraq practically entering a sectarian civil war between 2006 and 2007. It was the establishment of the "Sahwa," or Sunni Awakening Councils, that successfully turned the tide against al-Qaida and other insurgent groups in the restive Sunni triangle that had crippled U.S. and Iraqi forces since 2003.

However, Baghdad did not capitalize on the opportunities. The Sunni tribes in return for ousting al-Qaida wanted a bigger piece of the political cake, integration of Sahwa forces into the official security apparatus and more concessions from Baghdad.

A continuation of monopolization of power under former Iraqi Prime Minister Nouri al-Maliki stoked further sectarian fires. Iraq was gripped with mass protests in Sunni areas by the end of 2012, and by the end of 2013, ISIS had already established a strong footing in Anbar province.

ISIS could not have made such steady gains if it did not have grassroots support. It is these Sunni tribes that remain key to defeating ISIS not only today, but preventing any ISIS mark from entering their heartlands once more. While U.S. President Barrack Obama's belief that "I don't think we're losing" or that Ramadi was merely a "tactical setback" is a delusional assessment, Obama was spot on with his statement: "If the Iraqis themselves are not willing or capable to arrive at the political accommodations necessary to govern, if they are not willing to fight for the security of their country, we cannot do that for them."

Iraqis have been quicker to point a finger at the U.S. than their guns at ISIS, and that is the fundamental issue. National reconciliation has been a key condition of U.S. support since 2003 with the U.S. surge strategy of 2007, as thousands of troops were poured in to stabilize the security mayhem in Iraq at the time instigated under the proviso that Baghdad would mend ethno-sectarian wounds. Then the U.S.-led coalition intervention against ISIS last year was under the firm condition that Maliki would be replaced by a more inclusive figure that would placate the national divide.

The U.S. has spent trillions of dollars and thousands of lives to afford Iraqi politicians an opportunity to rebuild the state and bridge the elusive national divide in the post-Saddam era. But years of sectarian policies have only strengthened this divide and it is easy just to blame the U.S. for all of Iraq's troubles and not look closer to home. Whether ISIS now or al-Qaida in the Sunni insurgency heyday, these militants are simply exploiting glaring gaps in the ethno-sectarian fabric of Iraq. Prior to ISIS's attacks in 2014, Iraq had on paper one of the largest security forces in the Middle East with the U.S. providing significant advanced weaponry and training programs. Now in 2015, the theme is once again the need to build up and train Iraqi security forces and provide weaponry.

This may make little difference if the core issues are once again not addressed - the army's low morale, sectarian mistrust and animosity that dot the landscape as well as state forces that are not sufficiently inclusive of vital Sunni and Kurdish ranks.

As the forces wilted away in Ramadi, the baton was once again passed to the much more effective Shiite militia forces to take the fight to ISIS. It is becoming increasingly evident that Iraq can only survive if it effectively has three armies -Kurdish peshmerga forces, a new official Sunni battalion and Shiite forces. If the ISIS advance in Iraq was about exploiting fractures in the Iraqi state then this is no different in Syria. ISIS took control of the historic city of Palmyra in Syria just days after assuming control of Ramadi.

But, as with victories in Iraq, the ISIS victories in Syria are as much down to the weakness of the Syrian state and opposition forces as the sheer strength and capability of ISIS. The U.S. train-and-equip program in Syria is slow and unclear. Even then, these forces are designed to confront ISIS and not the real reason why we are even talking about ISIS today - the regime of Syrian President Bashar al-Assad. Until a strategy is devised to effectively tackle both Assad and ISIS in Syria, and ISIS and ethno-sectarian fractures in Iraq, the fight will merely be a day-to-day reactionary affair rather than the onset of any true long-term strategy.