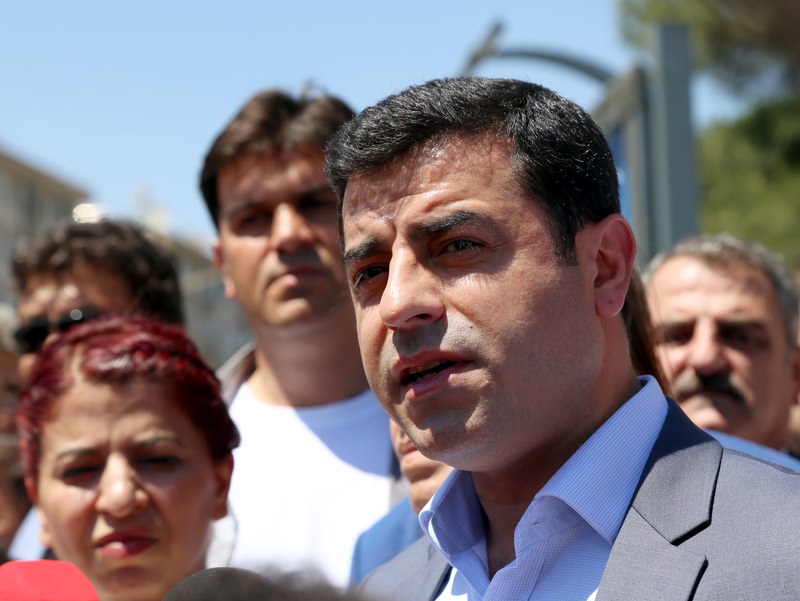 Recently, the HDP's Co-Chair Selahattin Demirtaş participated in an interview on a Hezbollah-affiliated television network Al-Manar. In the interview, he reiterated his party's stance on Syria which perceives the Assad regime ‘part of the solution' and Turkey's foreign policy as ‘secterian Sunni politics'

Recently, Selahattin Demirtaş, a co-chair of the pro-Kurdish Peoples' Democratic Party (HDP), went on the Hezbollah-affiliated television network, Al-Manar, to discuss various topics ranging from his party's entrance into Parliament to the crisis in Syria. His most notable comments came when answering questions regarding Turkish foreign policy with respect to Syria. Demirtaş applauded Hezbollah's efforts in the interview and said that he stands with the so-called resistance.

He went on to claim that Turkish foreign policy should change with respect to Syria. The Al-Manar interviewer, barely able to retain her smile, asked him for further details with respect to his answer. Using the same rhetoric employed by Syrian President Bashar Assad and his proxies, Demirtaş claimed that Prime Minister Ahmet Davutoglu is "living in the past and thinks he is in the days of the Ottomans." He went on to say that the prime minister acted in a "sectarian manner" and that his policy on Syria is based on "sectarian Sunni politics." Furthermore, he promised that he will change the policy on Syria now that the HDP has surpassed the 10 percent election threshold to enter Parliament. He reaffirmed his party's platform that it wants a peaceful solution in Syria that encompasses the Assad regime, which he deemed "part of the solution." Demirtaş then claimed that the Justice and Development Party (AK Party) government took positions that were "hostile to the Kurds" in the area.

With respect to this interview, there are many glaring problems with Demirtaş's statements, but before analyzing each of his remarks, it is important to look at his decision to choose Al-Manar as an avenue with which to communicate his thoughts. First and foremost, Hezbollah is an active party fighting alongside forces loyal to Assad. They are a key pillar in propping up the Syrian army and relaying key military information to their leadership. With this in mind, has Demirtaş forgotten about the Syrian army's attacks in Turkey? Maybe the memory of one family who lost four of their relatives in Akçakale due to a mortar attack occurred to him. It is a despicable display to go on a network that supports these flagrant violations of the territorial integrity of Turkey. Demirtaş might as well conduct an interview with right-wing Israeli radio channel, Arutz Sheva, while he's at it.

With that out of the way, Demirtaş's statements could not be any more baseless. Hezbollah is by no means a resistance group when it is actively taking part in murdering Syrians. It is equally ridiculous to criticize Davutoglu's alleged "sectarian politics" when he is on a channel that not only espouses Shiite sentiment to motivate its fighters, but boasts trying to implement "Velayat-e Faqih" in the Arab world. Turkey, under the AK Party, has opened its doors to all refugees, Yazidis, Kurds and Arabs. On the other hand, Hezbollah is doing the opposite by ethnically cleansing Sunni-dominated areas, like in Homs and Qusair. To go and even claim that Assad can be part of the solution while saying that Turkey is part of the problem is ludicrous. In reality, such remarks should not really be surprising given that some HDP members have repeatedly voiced support for Assad and even visited him in Damascus.

Demirtaş's silliness reached new proportions when he claimed that the AK Party had a hostile approach to Kurds in Syria. The reality could not be further from such an allegation. The Turkish government took in thousands of Kurdish refugees who were escaping battles between the Islamic State of Iraq and al-Sham (ISIS) and the Syrian Kurdish Democratic Union Party's (PYD) People's Protection Units (YPG) in addition to Assad's air campaign in Kurdish areas. The Turkish government did disapprove of the YPG's request to travel back and forth with military equipment across the Syrian-Turkish border because of its ties with the PKK. In addition, such a blatant use of the Turkish border would fall beyond the government's auspices due to the porous nature of the border. As a result, the AK Party proposed a plan where peshmerga troops from the Kurdistan Regional Government (KRG) in northern Iraq would assist the YPG against ISIS in a manner that would be monitored by Turkish authorities. Due to political friction between the YPG and the peshmerga forcess, the YPG had initially refused. However, after a series of losses against ISIS, they finally accepted the conditions. As a result, not only did Turkey become instrumental in not allowing the fall of Kobani to occur, but it also was a huge national security win by not allowing YPG and PKK militants, the latter which Turkey, the U.S., and EU deem a terrorist organization, to roam freely across the Turkish-Syrian border.

Demirtaş revealed his explicit bias when it comes to the AK Party-dominated Turkish government. In the interview, he disregarded the peace process President Recep Tayyip Erdogan started with the PKK and the exponential increase in investments in southeastern Turkey under the AK Party. Also, his complete silence as Turkmen and Arab Syrians are being ethnically cleansed by PYD units is deafening. Where is your condemnation regarding this matter? It seems like Demirtaş would prefer to condemn Turkey on a news channel that makes no effort to hide its hostility toward his own country. Shame on you, Demirtaş.