The Europe we want 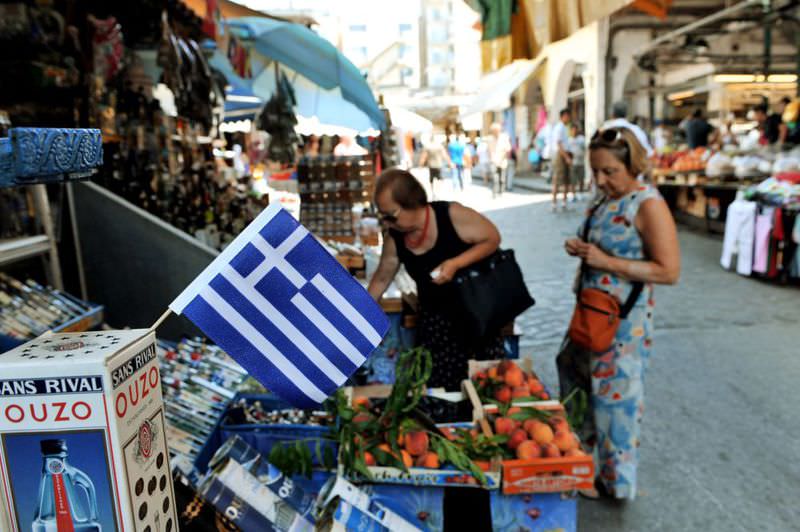 Customers stand at a shop on the streets of Thessaloniki province in Greece.
by Vana Stellou Jul 22, 2015 12:00 am

Today the situation in Greece had Greeks lining up outside banks on Monday, July 20 as they reopened three weeks after closing to stop the system from collapsing under a flood of withdrawals, the first cautious sign of a return to normality after a deal to start talks on a new package of bailout reforms.

However, capital controls will remain in place and payments and wire transfers abroad will still not be possible - a situation that Angela Merkel, the German chancellor, said on Sunday was "not a normal life" and warranted swift negotiations on a new bailout.

The stock market will also remain closed until further notice.

Lines formed outside banks in central Athens as people waited to take care of business frozen during the three-week bank holiday.

Limits on cash withdrawals have been made slightly more flexible, with a weekly limit of 420 euros in place of the daily 60 euro limit previously.

"Capital controls and restrictions on withdrawals will remain in place, but we are entering a new stage that we all hope will be one of normality," said Louka Katseli, president of the Hellenic Bank Association.

Greeks will be able to deposit checks but not cash, pay bills as well as have access to safety deposit boxes and withdraw money without an ATM card.

Bankers said there may be minor disruptions after the three-week interruption to services but they expected services to resume largely as normal.

"I don't expect major problems, our network and the network of our competitors are ready to serve our clients," said a senior official at Piraeus Bank, one of the big four lenders. "There might be lines because many people will want to withdraw money from their deposit boxes," the official said.

The bank closures were the most visible sign of the crisis that took Greece to the brink of falling out of the euro earlier this month.

The Greek government is eyeing a fresh start and swift talks on the bailout that will keep Greece afloat.

The tough terms of the bailout will see tax hikes, pension cuts, strict curbs on public spending, an overhaul of collective bargaining rules and a transfer of 50 billion euros of state assets into a special privatization fund.

In exchange, Greece is hoping to receive loans of up to 86 billion euros.

Increases in value-added tax agreed to under the bailout terms have also taken effect with value-added tax (VAT) on food and public transport jumping to 23 percent from 13 percent.

Acceptance of the bailout terms that meant the banks could reopen marked a turnaround for Prime Minister Alexis Tsipras after months of difficult talks and a referendum that rejected a less stringent deal proposed by the lenders.

According to the recent political situation in Greece and the new tough "Third Mnimonio" - Third Memorandum - the Europe of the Enlightenment, democracy, tolerance and solidarity, has collapsed. The EU seems to be a post-democratic construction, a huge automated bureaucracy with no vision except of the Stability Pact and continuing austerity. It is a strict hierarchical structure where the strongest states treat weaker countries as postmodern economic protectorates restoring practices and rhetoric that evoke the worst memories of the colonial and racist past of the continent. It turns a blind eye to the problems of the neighborhood for which it is also responsible and builds on the border in order to stay away with enormous human cost.

So far, there has only been rhetoric of the hypothetical high values and ideals that supposedly embody this model of a European union.

On top of it is a weapon in the hands of the most extreme nationalist, far-right and fascist political forces who are rushing to fill the gap between pompous and complacent rhetoric and the grim reality of poverty, frustration and constant humiliation.

Trust and confidence in Europe has been lost.

Europe is in a critical position.

What really happened? In the state of panic, are eurozone leaders creating an undemocratic monster with their actions? Is there a chance that euroscepticism is no longer reactionary? Can a federation of 28 states operate properly?

A union without solidarity is not a union any more. The crisis continues and is still devastating the economies of the eurozone because governments do not want to admit that it is a political crisis, which requires political solutions, meaning more advanced integration.

Now is the right time for politicians to start discussing what kind of Europe we want. Or rather, the type of EU that we urgently need in order to lift ourselves out of the multiple crises we are experiencing. In other words, it is now time for discussions on the Europe that we would like to be and for the Europe that has become necessary.

Most Europeans, including Greeks, who suffer under hard financial crisis, believed in a different model of Europe. This model is a European idea in terms of human principles, such as:

l Social solidarity where priority is on supporting people without ruthless numerical approaches that lead people into poverty.

A Europe that urges EU member states to carry out reforms and modernization of institutions so that they become effective in serving the needs of citizens.

A Europe of humanity that will not turn its face while people are experiencing difficult times.

So the question should not be whether our place is in Europe, but in which Europe and in particular, which euro. The political battle in Europe today can be summarized as a new confrontation between the center and periphery, a confrontation that most believed had finally finished. Without doubt, however, Europe is gradually transforming into a modern Union where the center, and especially Germany, sucks resources and precludes productive development of the region with austerity rules, forces monitoring by the individual economies of its own production plan and imposes quasi-preferential treatment for its own business, which is activated by memoranda. Thus, the center requires green energy when Germany sells photovoltaic panels, armament programs when buying shipyards, special crops in agriculture while looting public manufacturing companies as part of a larger loan agreement.

As for Greece, this special "Germanization" of the Greek economy has cost not only financially, but also in basic terms of democracy. That is why the battle against the memoranda is not just a battle for the welfare of citizens, but it takes on the character of a quasi-national liberation struggle. The plan of the center is no longer convergence, but deviation, and Europe has nothing to do with Europe of 1979, for example, but especially with our national interests. Therefore, if the question is whether the leash on the country will be long or short, then the answer is that the country will get rid of the leash. Above Europe, the euro and any other obsession, must lie the interests of each country, the strengthening of its national existence, democracy and institutions. The question is not where you belong, but on what terms.

The Europe of the Renaissance and the Enlightenment, art, science, philosophy, revolutions and movements, does not live there anymore. The great wealth of modern European civilization stepped on the two bases of reaction to the oppressors of Europe and the other inspired by Greek culture, ancient and Byzantine. All the intellectuals, artists and people of science in Europe remained European, lived in Europe and built Europe and its culture. The difference is that they lived in an "other Europe," which is very far from the Europe of nowadays.

After all, nothing in the universe is eternal, not even galaxies. People go ahead, even if they reciprocate.

There are procedures that define how Europe respects human rights and diversity. At the same time everyone should be reminded in Brussels that there are more serious problems to solve such as the millions of unemployed, the outbreak of the crisis in Ukraine and the gap between north and south among others.

It is obvious that what dominates the people of Europe is a disappointment in how the EU operates, formed by a board of directors that determines the future of the EU and the member states. It is clear, however, that changes need a lot of work and collective effort. The prevalence of a different Europe is not easy. At this stage, it is obvious that the big problem is financial, which certainly affects de facto issues relating to the institutional functioning of the EU.

Since my childhood I had a vision of a united Europe.

I believed in a multicultural Europe with common goals for the future and respect for people who have different personalities, nationalities and religions - a common homeland that ensures peace, security, development, free and fair trade and the eradication of poverty. Everything sounded perfect and offered a good atmosphere among the peoples of Europe, a sense of security and confidence for the future.

I was cultured in the name of those European rules. And suddenly the system collapsed. Was it possible for the vision of a united Europe that believed in a competitive globalized reality? And what will happen the day after?

The answer is within us, in the individual conscience of each and the restatement of our values.