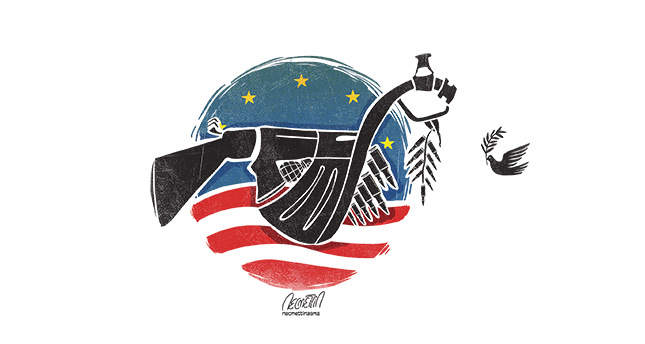 Terrorism cannot be associated with any religion. The West has to recognize the fact that rejecting its Islamophobic propaganda is the key to paving the way for peace in the world

Islamophobia, a term widely used both in the media and political and academic circles, has become a current issue in world public opinion. It can be described as prejudice and hatred towards Islam and racism against a Muslim minority. The term combines all sorts of different discussions, discourses and actions emerging from the ideological core bred by an irrational fear of Islam.

Islamophobia is accompanied by hostility, hatred and "othering," originating from an irrational, groundless fear of Islam and Muslims, discriminatory actions and the legitimization of violence. Islam's role in the past as a source of fear constructing Western Christian identity causes the West to approach Islam and Muslims with prejudices arising from their collective subconscious. Such prejudices prevent the scientific, objective and holistic consideration of the faith, civilization and culture of Islam. Moreover, Islam and Muslims - sometimes deliberately and especially for political motives - are depicted side by side with violence and terrorism. Western researchers, with a few exceptions, are unable to maintain the scientific perspective they use in other areas when it comes to Islam and Muslims. In this context, Rumi, a universal philosopher whose ideas have come to inspire humanity since the 13th century, said: "Prejudice buries knowledge. While the unprejudiced approach turns the illiterate into a scholar, the prejudiced perspective ruins and falsifies the knowledge."

According to some, following the 9/11 terrorist attacks, the world entered a new political era characterized as the "age of terrorism." All the measures of this new era could not prevent bloody terrorist attacks in Madrid 2004, London 2005 and the attacks in France at the beginning of 2015 called the "Sept. 11 of France."

The language of counterterrorism

The perpetrators of these attacks were presented as Islamist terrorists, radical Islamists, fundamentalist Muslims, Muslim terrorists and jihadists in Western media, public opinion and in the discourse of certain politicians and intellectuals. This discourse has also shaped national counter-terrorism activities. Such conceptualizations and characterizations define perpetrators from Muslim society located anywhere in the world. The conceptualizations labeling a number of barbaric, inhuman acts and their perpetrators as Islamic and Muslim wound the vast majority of Muslims, particularly those living in the West, and make them feel accused, offended and excluded. On the other hand, it triggers the discourse of prejudice, spite and hatred and acts of violence characterized as Islamophobic in the minds of Westerners unfamiliar with Islam and Muslims.

Due to globalization, the Islamophobic repercussions of such a conceptualization cannot be contained in the West, but extend to Southeast Asia and Africa and give rise to the radicalization of members of various faiths against Muslims. Moreover, governments introduce obstacles to the implementation of basic human rights of Muslim minorities under the pretext of the fight against terrorism.

In reality, religions offer peace, justice, brotherhood, love and mutual help; but in the past and nowadays, it is a fact that certain people arise among almost all religions who resort to unjustified violence by exploiting religion. Today, acts of violence and attacks by Israel against Palestinian people occur in front of international communities as living proof of state terrorism. Reports from international organizations for human rights indicate that Buddhist communities in Burma perpetrate acts of violence against Muslims in Arakan and that the Christian Anti-Balaka organization in the Central African Republic carries out acts of violence against Muslims, which may even be considered as genocide, extending beyond terrorism.

And yet, it seems that especially in Western media, the only religion associated with violence and terrorism is Islam. Acts of violence perpetrated by a Muslim individual or groups being politically driven are ruled out or are deliberately concealed.

The way that the media associates Islam with images, clichés and stereotypical concepts, which result in connotations of terrorism, violence, and brutality, paves the way for the danger of Islam turning into an exaggerated fear in the eyes of average citizens who do not know much about Islam and even about their own social issues.

Not only the media, but also many institutions and actors, particularly political actors, play a role in the creation of such incorrect perceptions. In particular, certain political actors make references to and emphasize radical Islam and Islamic terror through an approach that fosters a negative perception of Islam to legitimatize their policies, strategies and actions in the Middle East. As media and politics are correlated, one always feeds and supports the other. Therefore, an anti-Islam spiral develops, and this spiral also negatively affects other institutions.

Obviously, in terrorist activities between Ireland and England - a venue for Catholic and Protestant conflicts - a religious characterization has never been made despite violence stemming from the religious beliefs of the militants, and there has never been a characterization as Christian, Catholic or Protestant terrorists. Thus, just as we do not characterize people with their religious beliefs when we are talking about terrorists who are Christian and Jewish or those of other religions, the same respect and consistency should be shown for Islam, too.

The famous boxer Muhammad Ali visited the ruins of the World Trade Center on Sept. 11, 2001, and when reporters asked him how he felt about the suspects sharing his Islamic faith, Ali responded, "How do you feel about Hitler sharing yours?"

Also, statistics regarding the roles of those with Muslim origins in the U.S. and European countries in events characterized as terrorism reveal that such characterizations are totally wrong. Only 6 percent of terrorist attacks committed from 1980 to 2005 in the U.S. are linked to Muslims (and the percentage of Muslims in the U.S. population is 6 percent). And only 4 percent of current EUROPOL-based terrorist reports (2006-2008) are linked to Muslims.

There are no references that Islam, which means "peace," would legitimatize actions that are characterized as terrorism in terms of principles and values. Moreover, much more severe punishments are set forth against those actions in Islamic resources and past practices. When the principles and rules of Islam regarding international relations, war and peace, living together with people of different religions, methods of informing and calling to Islam, extremism and violence are examined, it is clearly understood that any attacks by any individuals, organizations and states on civilians and any actions that would jeopardize the security of life and property of innocent people and cause them to feel fear and terror either during war or at other times can be legitimatized under no circumstance.

Taking into account the principles of Islam, it is crystal clear that terrorism, violence, depression and anarchy, regardless of what it is called, have nothing to do with Islam. Apart from the fact that Islam has nothing to do with such destructive actions, it also excludes any sorts of anarchy, unrest, plot, defeatism, oppression, torture and maltreatment, in brief, terrorism, from the agenda of Muslims. The purpose of religion is not to distort and degenerate society, but to the contrary, it is to glorify and promote individuals and society in line with their disposition materially and morally.

Islamophobia: A threat to international peace

Today, Islamophobia poses a threat to inter-civilization dialogue, cooperation and harmony, multiculturalism and the culture of living together. It also appears as an issue related to law, and in particular, the law on human rights due to discriminatory actions and violence.

Popularizing a discourse that may flame anti-Islamic sentiments in the media and public and that may lead to racism and xenophobia is a serious problem in the context of the fight against terrorism.

The relationship between Islamophobia and terror has two basic dimensions. The first is pushing Muslims to extremisms such as violence due to discrimination and alienation. This dimension finds a place for itself in national and international strategies to fight against terrorism and deal with preventive aspects. The second dimension concerns terrorist actions committed by people under the influence of Islamophobic propaganda against Muslims or sometimes those accused of being tolerant towards Muslims. The desired level of progress in solving both the terror problem and Islamophobia cannot be achieved unless the second dimension is emphasized as well in counter-terrorism policies. Therefore, countries facing the terrorist threat are obliged to adopt an objective approach towards the issue of terrorism and develop and implement integrated policies accordingly. In this regard, terrorism should be not be associated with any religion, ethnic group and ideology and the values and delicate matters of faith groups. This is the only way to deplete these sources of abuse for the terrorists and to gain ground in the fight against terrorism. This will disrupt the environment leading to Islamophobic actions and stop the expansion of Islamophobia. However, the sincerity, determination and will of Western countries are key.

While Western countries endeavor to include Muslim countries in international cooperation to fight against terrorism, the same level of determination and will should be demonstrated in the fight against Islamophobia. Success in these two issues will undoubtedly prevent prejudices of the past from affecting the present. This will pave the way to national, regional and international stability, peace, security and the rule of law.