Cold war adversaries pick over the spoils of Iran deal 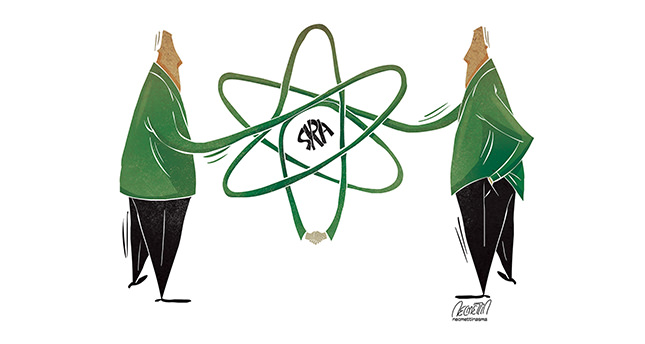 The Iran deal reveals that Moscow is not the natural bedfellow of Tehran, when it comes to Syria. But we can count on the U.S. to stick to their guns

The Iran nuclear deal continues to be unraveled like a pealed onion leaving you with stinging eyes and still none the wiser who the winners and losers really are.

Yet now it seems the implications for Syria are considerable and the role of the Russians underestimated. While Moscow now comes out of the wings and starts to really behave like a super power, the Americans it seems do the very thing that the Americans do best: Sell guns to those seeking peace.

Yet what all the pundits have been puzzled over has finally been revealed: What is in it for the Gulf Arab states?

U.S. Secretary of State John Kerry can now rewrite his place in history as a meeting this week in Qatar saw for the first time oil rich Arab countries openly stating that their fears are now set aside and they no longer doubt the fine print of the Iran deal.

Last week Kerry met with foreign ministers of Gulf Cooperation Council (GCC) countries who all now tacitly back the Iran deal, as, ingeniously President Barack Obama's touch has succeeded in convincing Gulf states that as part of the price they need to pay for Iran drastically reducing its nuclear capability, they too need to beef up their conventional weapons.

The Iran deal, signed on July 14, sees Iran reduce quite considerably its nuclear program in exchange for relief from harsh international sanctions. After years of tensions with Iran, Gulf Arab officials had grumbled about the small print of the agreement, although many, in particular Saudi Arabia, fretted over Iran becoming an economic super power and were earlier planning to boycott Iran, blocking all trade between Riyadh and Tehran. But things change dramatically when the Americans worked on the Saudis back in May when they visited Washington.

Consequently, the meeting with Kerry was the first time the GCC states praised the agreement together.

"Once fully implemented, the [Iran deal] contributes to the region's long-term security, including by preventing Iran from developing a military nuclear capability," Kerry said.

"We are confident that what they undertook makes this region safer and more stable," added Qatari Minister of Foreign AffairsKhalid al-Attiya.

For Iran to reduce its threat as a nuclear "aggressor" it is expected to swell the ranks of its fighters in Syria and in Hezbollah in Lebanon, and in so doing presents the region with a new threat, but one that is not nuclear.

And so, delighted that they are allowed to pull out all the stops and build state of the art missile systems, Gulf Arabs now can upgrade their own sanguine defense policies when before they did not have any to really mention. The Iran deal was historic in that it opens a new chapter in arms sales to the region by U.S. companies as Washington hopes to develop the GCC's missile defense capabilities as well as speeding up arms sales, boosting intelligence sharing and increase special forces training.

It is of course nothing really new. We have seen what the common thread is in the fight against the Islamic State of Iraq and al-Sham (ISIS) from the air with Gulf states pounding the extremists everyday with U.S.-made weapons and aircraft - arms sales.

Shareholders in U.S. aircraft and missiles maker Lockheed Martin will no doubt be watching and counting events happening this week in the region, steered by Kerry.

In a bid to what has been reported as "supporting" Gulf Arab countries, Kerry said a number of working groups would meet in Saudi Arabia this week. Kerry said Washington "agreed to expedite certain arms sales that are needed and that have taken too long in the past."

You could say they have jumped the gun though.

The U.S. State Department had already two weeks ago signed off the sale to Saudi Arabia of 600 PAC-3 missiles and related equipment, costing $5.4 billion. Lunch, basically, for these Gulf countries' balance sheets.

Kerry has at least succeeded in the ultimate bluff, to annul any untamed, liberal thinking in a region where thinking for many folk is generally not encouraged as a rule. Iran's interventional policies in Yemen, Syria, Iraq and to some extent Bahrain is the real black dog that Gulf states for the moment would prefer not to face as they unwrap their presents and read the instructions.

But have the Saudis been fooled by Kerry into thinking that they can ask for the stars as well as the moon? Could a new beefed up missile shield be ignored when a new deal in Syria is hoping to be struck that would effectively weaken Syrian President Bashar Assad's forces on the ground?

Syria has been in the news recently for what looks like yet another shift in geopolitical plates, but this time it is the Russians who are finally getting tired of the war there; Washington will note though, for all the wrong reasons.

While the West continues to parade the idea that ISIS is the main concern when in fact removing Assad is really the nucleus of the big picture thinking, it is Moscow that is now turning its sights on ISIS in a week where journalists noted the somewhat grandiose fanfare from Ankara announcing it was about to launch a "major offensive" on ISIS in Syria.

The Russians are starting to get nervous about returning jihadist to the Caucasus, as many Chechens returning to the battlefield is not what Russian President Vladimir Putin had bargained for when he weighed in to Syria to support his dependent despot, Assad, in the early days of 2011.

Last week the Russians organized a meeting between the Saudi minister of defense and Syria's security chief. Reports in one pro-Assad broadsheet suggested that the Russians are sticking with their man, but they want a real push on ISIS as Putin is getting jittery about despondent fighters leaving Syria to return home to fight mother Russia.

It was reported at the time that the Saudis refused to cooperate with Assad as the Russians had asked. Yet curiously last weekend Riyadh reportedly proposed a different plan to Assad to resolve the crisis in his country, the London-based Al-Hayat newspaper reported.

The cusp of the idea is simply to deflate the support of both sides with the Saudis will stop its support of rebels trying to overthrow Assad in return for Hezbollah, Iranian and other Shiite forces pulling out of Syria.

According to Al-Hayat, this is expected to help "prepare the ground for presidential and parliamentary elections in Syria, under U.N. monitoring."

If the initiative comes from the loins of the Russia talks then can we assume that Moscow is planning, after all, the removal of Assad, but only in the longer term. At first glance it is as though Assad has failed his Russian backers on three levels: Assad can neither kill ISIS in significant numbers nor stop jihadists either entering or leaving the country from its ranks.

In fact, what is more likely is that the Russians are trying to do what might seem impossible now, but plausible in a few years - to make Assad a pan-Arab nationalist.

Part of this is to nudge the Iranians out of the Syrian picture as Tehran sets to gain influence in Syria if it is a checkered landscape of hardcore Sunni groups fighting the regime. By contrast, if Assad could rebuild an "Arab" state, the country would remain much more of a Russian satellite than an Iranian one, as the latter depends on a fragmented, failed state rather than a singular wobbly one.

Assad for the moment must be having sleepless nights. The Saudis have offered him a deal. But can he risk the wrath of Iran's hardliners who will not forgive him easily for thanking them for the Iranian military support on the ground, but then asking the soldiers as well as Hezbollah fighters to leave.

If he does not do this he risks losing more ground in Syria and for the Russians to consider him a tool that has lost its edge.

Recently the Syrian leader made a shocking announcement on state television, admitting to losing ground in the war and his ranks dwindling, the latter as a direct result of the morale of senior army officers hitting an all-time low as their influence is drowned out by the ever increasing numbers of militias that Iran is behind.

Have those fighters who turned the war around in the summer of 2013 in Assad's favor, lost their appeal now for the Syrian leader and now considered to be part of the problem rather than the solution?
RELATED TOPICS