HDP: The party of missed opportunities 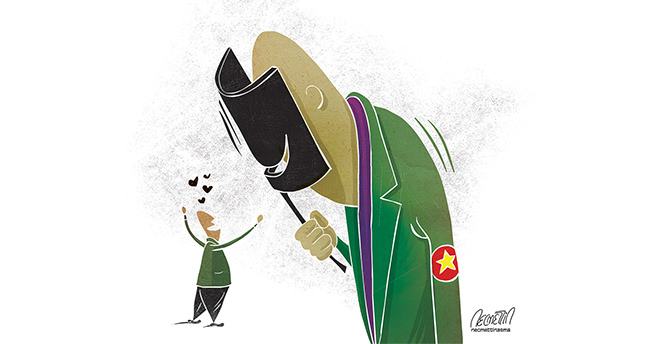 by Enes Bayraklı Aug 14, 2015 12:00 am
To the surprise of many analysts the Peoples' Democratic Party (HDP) achieved an unprecedented victory by receiving 13 percent of the vote in the June 7 general elections. No other party that is affiliated with Kurdish nationalism in Turkish history has achieved such a high percentage of votes, let alone pass the 10 percent national election threshold. Consequently, the HDP won 80 seats in Parliament and became the third biggest party, sharing this place with the party representative of Turkish nationalism, the Nationalist Movement Party (MHP). This dramatic development gave hope to many observers of Turkish politics that the HDP will be able to appeal to the whole of the Turkish electorate and contribute to the reconciliation process by sidelining its armed wing, the PKK, and become the main and only legitimate representative of Kurdish nationalism.

However, the developments following the elections and breakdown of the reconciliation process demonstrated that the HDP's unprecedented success in the elections was indeed a pyrrhic victory. In order to pass the 10 percent election threshold, the HDP based its whole election campaign in opposition to President Recep Tayyip Erdoğan, which at times even articulated itself as an Erdoğan -hate campaign. By doing so the HDP wisely aimed at the anti-Erdoğan atmosphere that accumulated after the Gezi Park protests. Consequently, the HDP won votes from different segments of Turkish society that never voted for Kurdish nationalist parties before and the Justice and Development Party (AK Party) lost its majority in Parliament. However, this victory also came with a cost, the undermining of Erdoğan, who was the main initiator and protector of the reconciliation process since 2005. One should not forget that the reconciliation process was undertaken on Erdoğan's initiative and he took a huge political risk by initiating democratic reforms and negotiations with the imprisoned leader of the PKK, Abdullah Öcalan. It was Erdoğan's courageous steps that gave cultural rights to Kurds in Turkey and convinced the wider public about the necessity of the reconciliation process with the PKK. Therefore by attacking and demonizing Erdoğan, the HDP also undermined and poisoned the basis of the reconciliation process. Furthermore, the HDP developed a double strategy regarding its election campaign. On one hand, in the western regions of Turkey, the HDP presented itself as the main defender of democratic values that will prevent Erdoğan from introducing a presidential system. On the other hand, the HDP followed a different election strategy in the southeast by building on the Kurdish nationalism that was on the rise after the Islamic State of Iraq and al-Sham (ISIS) attacked Kobani in Syria. Additionally, PKK militants put pressure on Kurdish voters in the distant rural areas by threatening them with consequences if they did not vote for the HDP. The results of the elections in thousands of small villages where the HDP got 100 percent of the vote are solid proof of this intimidation. This and many other incidents demonstrated that the PKK has misused the cease-fire era by trying to build a quasi-state structure with its own prisons and courts.

Despite these developments, there was still a positive atmosphere right after the elections regarding the future of the reconciliation process in Turkey. Many analysts thought that the HDP would finally become a legitimate political force accelerating the disarmament of the PKK. Yet the developments after the elections proved that this was an illusion at best, as the HDP and PKK leadership did not read the situation from this perspective. The HDP and PKK read the results of the elections as a clear approval of the HDP and PKK's policies in the east and west of Turkey. So when everybody was expecting more peaceful rhetoric from the HDP and PKK it was a big disappointment to hear radical and violent statements from HDP politicians and the PKK leadership. Right after the elections, one HDP deputy threatened village guards with elimination and the PKK leadership declared dam construction projects in the southeast as legitimate military targets. Furthermore, the PKK called the people to "self-defense" demonstrations and then to a "revolutionary people's war." So it was long before the Suruç suicide bombing that the PKK announced the end of the cease-fire and started to attack construction projects in the southeast. However, it was not until the coldblooded, execution of two police officers in their homes, which was declared by the PKK as revenge for the Suruç bombings, that Turkey realized that it was impossible to continue with a cease-fire and started to bomb PKK camps in northern Iraq and ISIS targets in Syria.

The enemy of my enemy is not always my friend

There are also external developments that might help us to understand this irrational behavior of the PKK and HDP. First of all, Kurdish nationalists saw the developments in northern Syria and the possibility of the establishment of an autonomous Kurdish region or independent state as a historic opportunity that might produce new opportunities for the dream of a Kurdish state in the region. This delayed and out-of-touch-with-reality nationalism and romantic revolutionary ideas all contributed to wrong political calculations by the PKK. Secondly, by fighting ISIS with the help of U.S.-led coalition airstrikes the Democratic Union Party's (PYD) People's Protection Units (YPG) and the PKK found a possibility to present themselves the de facto secular ground troops of the U.S. in its war against ISIS. The PKK leadership thought this might help it shed its status as a terrorist organization in the West.So when Turkey started to bomb ISIS targets in northern Syria and the PKK in northern Iraq, there were some saying that Turkey is bombing the PKK, which is fighting ISIS. This simple logic tells us that the YPG and PKK is fighting ISIS and that is why it must be supported. However, Hezbollah, which is recognized as a terrorist organization by the West, is also effectively fighting ISIS in Syria. Yet this does not mean that Israel or the West should support Hezbollah. On the contrary, citing its own security, Israel has repeatedly bombed Hezbollah targets in Syria. Consequently, one might say that in the Middle East the enemy of my enemy is not always my friend, and Turkey has legitimate grounds to bomb both terrorist organizations.

Unfortunately, HDP Co-Chair Selahattin Demirtaş has half-heartedly denounced the PKK terrorist attacks that targeted both civilians and security forces and called both sides to lay aside their weapons. Yet what is expected from the HDP leadership is to show a clear guidance and call for the disarmament and withdrawal of the PKK form Turkey. Such a courageous act will immensely further the space of democratic politics and decrease the PKK tutelage of the HDP. This will also encourage and pave the way for a broader settlement of the long-lasting conflict. Therefore, what is needed today is a demilitarization of the HDP and Kurdish nationalism in Turkey, because after the democratic reforms of the last decade there is no justification to sustain the armed conflict against the state. That is why there is immense pressure on HDP politicians from civil society and the party's new voters to renounce violence and call for the disarmament and withdrawal of the PKK. Yet so far developments show that the HDP missed a historic opportunity to become a legitimate actor of the Kurdish nationalist movement, free from PKK tutelage and has legitimate appeal to the wider Turkish electorate.

Ph.D., a faculty member in the Department of Political Science at the Turkish-German University since 2013
RELATED TOPICS