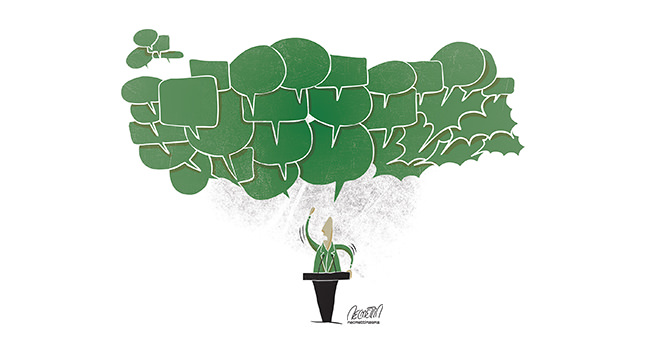 Despite significant differences betweend and even hatred of each other, all opposition parties tried to unite against the AK Party to try to exploit political uncertainty to defeat the party

Beginning with the first 10 days of July, there have been significant changes in Turkey and, in parallel with it, in balances across the region. Let us remember them. The country has just emerged from elections and the Justice and Development Party (AK Party) faced an alliance that competed against it almost as a bloc. The local and presidential elections in 2014 and the general elections in 2015 were perceived as a three-round struggle. Because in the event that the AK Party did not falter in these three elections, there would be no election until 2019. And that meant, with Recep Tayyip Erdoğan elected president, a presidential system and the making of a new constitution.

The presidency used to serve as an instrument of tutelage that was designed to block civilian governments. Its constitutional powers had been greatly expanded following the 1960 and 1980 military coups. Yes, presidents were elected by Parliament, but when the candidate came from a different section of society that was not approved of by the military, as seen in 2007, higher judicial bodies came to the rescue and blocked elections. In 2007, Abdullah Gül's candidacy was blocked by the Constitutional Court, and moreover, the military issued a memorandum.

The AK Party overcame this obstacle by passing a constitutional amendment that introduced the election of the president by popular vote. Thus, Erdoğan was elected president for a five-year term, with 52 percent of the vote in the presidential election on Aug. 10, 2014.

Before these three elections, that is to say from 2013 onward, Turkey's already abnormal agenda has become all the more extraordinary.

In that period, it turned out that the Gülenists had been organized within the state apparatus and that the purpose of this organization was to replace the nationalist and secularist tutelage, which had ruled the country despite the people for 80 years. Since the Turkish state had been built in a top-down fashion, despite the people, it was possible to conquer it from within. Cadres dominating the military, judiciary and intelligence apparatus used to represent deeper power relations, regardless of the results of free elections being held since the 1950s.

As the then prime minister, Erdoğan refused the demands of the Gülenists, the temporary alliance collapsed and the Gülenists began to behave increasingly like an illegal organization. And Gülenists attempted a coup on Dec. 17 and Dec. 25, 2013 - three elections ago - with forged evidence obtained through illegal wiretapping, threats, and blackmail. It was a graft probe on the surface. Gülenist prosecutors and judges made a move to topple the government and implicate Erdoğan as well by violating all legal rules, hiding information from their superiors and fabricating evidence.

This organization made a similar attempt on Feb. 7, 2012. It portrayed the Oslo talks between the National Intelligence Organization (MİT) and the PKK to lay down arms as treason, leaking meeting minutes that were taken out of context, and ultimately aiming to arrest MİT head Hakan Fidan. That operation was launched when Erdoğan was hospitalized awaiting surgery.

These two coup attempts failed. Erdoğan prevented both attempts with enormous wisdom and dexterity and managed to tell the people about the facts behind these incidents. Hence, the AK Party emerged victorious in the local elections on March 30, 2014, and in the presidential election on Aug. 10, 2014.

That being the case, a new strategy was drawn up as a last-ditch effort for the June 7 elections.

We can find some clues of this strategy in a statement on social media made by Zekeriya Öz, the ex-prosecutor who has become the protagonist of the Ergenekon and Balyoz (Sledgehammer) coup plot trials held in recent years to seize control of the army.

Öz wrote: "If the PKK had been involved in the Gezi protests, the current government would not have been able to remain in power. The PKK did not join, whoever gave the order!"

And it is already known that the reason why the Gezi Park protests got out of control was the deliberate acts of police chiefs and officers linked to the Gülen Movement. Behaviors like burning protesters' tents and using excessive force struck us all as suspiciously odd back then.

We also know that imprisoned PKK leader Abdullah Öcalan stopped the PKK and Peoples' Democratic Party (HDP) during the Gezi protests and the Dec. 17 and Dec. 25 graft probes. Öcalan interpreted both incidents as attempted coups and said: "We will not stoke this fire." As a result, the PKK and HDP had to remain neutral during these two attempts, although they wanted to get involved.

The striking force for the 2015 elections would be the PKK-dominated HDP, rather than the PKK itself, or Öcalan. But the reconciliation process, which had been launched by Erdoğan, was going well and there was a huge desire for peace among both Turks and Kurds. Ninety percent of the Kurds supported the reconciliation process. Erdoğan was the architect of the process. On the other side was a terrorist organization leader, Öcalan, who was willing to make a deal with the state to lay down arms.

There was some planning to render the reconciliation process meaningless and destroy it, and to neutralize Öcalan. On the one hand, accusations of dictatorship were leveled against Erdoğan and, on the other hand, HDP Co-Chair Selahattin Demirtaş was lauded by the same alliance at the expense of Öcalan.

For these two efforts to work out well, however, a strong factor had to be put into use.

And that factor turned out to be the Islamic State of Iraq and al-Sham (ISIS).

National and foreign media outlets have begun to spread the lie that the AK Party aids ISIS. The PKK and HDP have also clung to the ISIS lie to arouse hatred for Erdoğan, especially in the southeast and east, that is, among Kurds, and to render the reconciliation process meaningless. That propaganda became virtually the main subject of the elections. Kurdish nationalism was stoked through the events in Kobani. As with every nationalist movement, it needed a founding enemy or threat and a myth. That enemy would be the AK Party.

The HDP co-chairs kept on escalating violence and hate speech. The PKK has declared at least a dozen times that the reconciliation process ended and the resumption of armed struggle. And finally, the HDP called on people to take to the streets on Oct. 6-8, 2014. And more than 50 citizens, most of them Kurds, were killed in the ensuing incidents. It was a dress rehearsal for an uprising.

The government has maintained the reconciliation process even under these circumstances. But the PKK failed to secure enough support from the streets to create a canton in Turkey.

Going back to what I wrote at the beginning.

During the course of these events, it has become clear that although it failed to win a majority in the elections, the AK Party is a well-established party and Erdoğan is a rational and powerful political figure who will never be abandoned by the people.

The results of the elections showed that there is no dictatorship in Turkey and that 3 percentage points of votes switched to the HDP in the southeast and east due to the PKK's pressure and threats. The operations launched against ISIS after its suicide bombing in Suruç rendered the allegations about Turkey's aiding ISIS void. The agreement with the U.S. on a safe zone, demanded by Ankara from the U.S. for the last three years, is the most effective solution that will push ISIS from the border area.The PKK announced on July 11 that the cease-fire was over and that it started a "popular revolutionary war." And starting on July 20, it began to kill police officers, soldiers and civilians. It justifies the killings on the ground that "the government builds dams." But it has realized that it cannot snatch territory from Turkey by taking advantage of political uncertainty and that it cannot found a state in Syria by antagonizing Turkey.

Prosecutors from the "parallel structure" flee Turkey one after another. Turkey has demonstrated strongly that it is open to all kinds of cooperation on condition that its territorial integrity and internal affairs are respected. It is not possible anymore to manipulate Turkey through the PKK, HDP, ISIS, Revolutionary People's Liberation Party-Front (DHKP-C) or Gülen Movement. People have already woken up to the trick.

Let's see how long it will take to accept the truths that have been revealed. It is in the interests of all.
Last Update: Aug 26, 2015 7:27 am
RELATED TOPICS