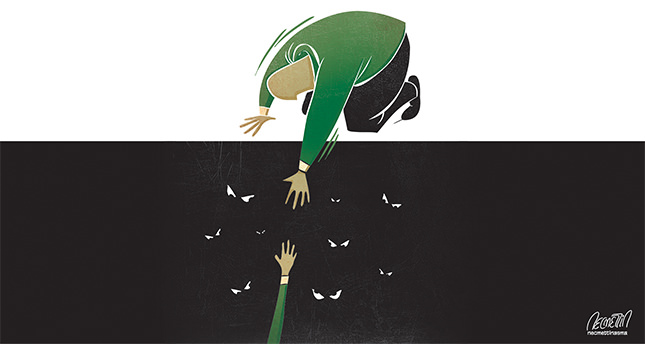 Every day I am stuck by the tragic events unfolding in the Mediterranean, with migrants from a host of nationalities risking their lives trying to enter the EU. Many of these people, especially those using the Eastern Mediterranean route, leave their homes, often in fear of their lives, usually fleeing conflict in their own country in the hope of finding safer homes, better employment and a better future for their children.

Turkey, as a country that directly neighbors Syria, knows only too well about the tragic consequences of the civil war unleashed upon the country by its president, Mr. Bashar Assad. Turkey today hosts almost 2 million refugees and asylum seekers, more than any other country in the world, mostly from Syria, but with many also fleeing poverty and conflict in Afghanistan and Iraq.

Turkish people are known for their hospitality and the way Turkey has responded so generously to this flood of refugees is proof of this. Turkey has recently founded an outstanding civil migration department, the Directorate General of Migration Management, introduced regulations to protect migrants, given access to education, and medical and social care and, as the United Nations High Commissioner for Refugees (UNHCR) reiterated to me recently. The Prime Ministry Disaster and Emergency Management Authority (AFAD) runs possibly the highest standard of refugee camps in the world.

Of course, as well as hosting a large population of refugees, Turkey is also a transit route for irregular migrants determined to reach the EU. The numbers of irregular migrants using the Aegean route to travel to the EU has now overtaken the central Mediterranean route even if - perhaps because they arrive in small groups rather than in large boats - they attract less attention in the international media. Turkey is fighting hard to counter this irregular migration in the Aegean and Mediterranean and safeguard the lives of the migrants who are often the victims of unscrupulous human smugglers. The figures tell a compelling story of how far and fast this problem has grown. In 2014, the Turkish Coast Guard rescued 15,000 migrants; in the first seven months of 2015, they have rescued almost 25,000. The numbers have more than doubled. Goodness knows how many would have drowned were it for not for the Turkish Coast Guard's heroic efforts.

But what more can we collectively do to prevent such loss of life and address the reasons for irregular migrants setting out on their perilous journeys to start with?

Obviously, bringing conflict to any end in Syria and Iraq and helping them toward genuinely inclusive politics is essential. We need to redouble our efforts to bring about a political settlement in both countries. We need Russia and Iran to play their part in that effort rather than continue to foster division and sectarianism as they have done up to now.

Humanitarian aid is essential. Turkey stands alone with the GoT estimating having spent around $6 billion. But, outside the region, the U.K. is the second largest bilateral donor to the international response to the humanitarian crisis in Syria and neighboring countries, having pledged nearly 1 billion pounds ($1.56 billion). The U.K. also contributes over 10 percent of the 1.8 billion euros that the European Commission has committed to Syria and neighboring countries in humanitarian and broader stabilization programs.

In Turkey, the U.K. has allocated 28 million pounds for projects supporting Syrian refugees, including food, shelter and relief packages. These U.K-funded projects in Turkey have been and are being implemented through a combination of nongovernmental organizations and U.N. agencies. In partnership with multiple Turkish institutions, we also work on targeted projects to build capacity to protect refugees and tackle irregular migration.

Frankly, other countries have not been as generous. We are keen to work with Turkey to unlock more funds from the international community.

We must also go after the criminal gangs and trafficking networks that profit from this human misery. We need to improve further work between our respective law enforcement agencies so that we tackle irregular migration at its source in the countries of origin, as well as while they are in transit. And we need to establish a more effective process of returning irregular migrants to their countries of origin when it is safe to do so. The destination countries must do their bit as well. We will continue to accept genuine asylum seekers, but we also need to get the robust message across to would-be economic migrants that getting on a boat will not lead to automatic settlement in the EU. Until we do, numbers will continue to grow and criminals will get richer.

We are adopting this approach in the central Mediterranean as well. The U.K. is planning to spend a total of 900 million pounds bilaterally in Africa in 2015-2016. We are also considering further significant spending on humanitarian programs in the region this year, especially in support of refugees and internally displaced communities. We are playing a leading role in the search and rescue mission in which tens of thousands of lives have been saved, with over 5,000 people rescued by U.K. ships. In addition to our vital life-saving work in the central Mediterranean, we will continue to develop a comprehensive long-term solution to this problem with EU partners.

Of course there is more that we could and should be doing both individually and collectively. For our part, the U.K. will continue the vital work in the central Mediterranean and the Eastern Mediterranean. But it is essential that we work together as an international community to tackle this issue and to continue to build on this cooperation. We have a lot to learn from our Turkish partners who are very much at the frontline in tackling this problem. They deserve our admiration and support.

*Richard Moore is the British Ambassador to Turkey