Peace process and its aftermath 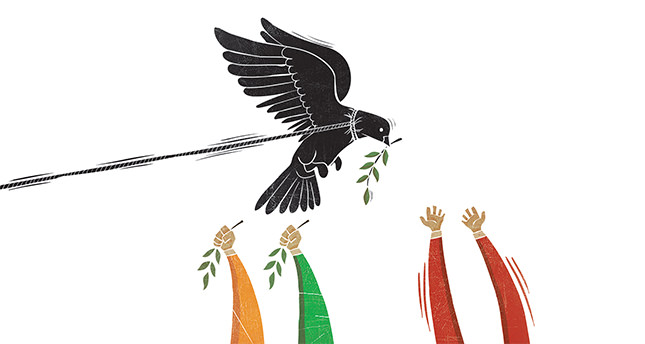 Just like the Troubles in England, another similar ethno-nationalist conflict in Turkey is going to end up going through a peace process. Knowing this truth, the PKK is desperately playing its last game to continue its presence by terrorizing the region

When you Google "peace process," the first items that come up are the Israeli-Palestinian Peace Process, Northern Ireland Peace Process and the Solution Process - also known as Turkey's reconciliation process - in that order. Naturally, these are processes that have very different historical backgrounds and yet they are connected in the popular imagination, and indeed, in the famed graffiti and murals in the city of Belfast. On what is called the International Wall on the Catholic Falls Road side of the Peace Line, there are murals dedicated to both the Palestinian and Kurdish struggles. The Kurdish one has a picture of Abdullah Öcalan and a quote from him that says: "Peace is more difficult than war. We were not scared as we resisted, we will not be scared when we make peace," which is particularly interesting to contemplate in a period when the PKK seems rather scared to make peace.

The International Wall of graffiti commemorates many other struggles and movements of resistance throughout the world and is punctuated by a thick iron gate not dissimilar to some of the less horrifying checkpoints in Palestine. There are several such gates in Belfast, and while in the mornings they are wide open and may look like relics of a police state to excited tourists in the daylight, they are shut at 10:00 p.m. weekdays and remain closed throughout the weekends. The authorities, locals will tell you, do not want drunk people with time on their hands crossing the Peace Lines and having "a bit of a laugh" throwing stones at the others' houses.

It would be redundant to say that Northern Ireland has a very complex history,as which part of our troubled world doesn't? It has had a very long relationship with the rest of the British Isles, like, I suppose, many other parts of the colonized world. What made international headlines in the late 20th century and came to be known as the Troubles, started in Derry in 1968 with Protestants and Catholics demonstrating for better living conditions and rights for Catholics who were being discriminated against when it came to jobs and housing among other things. The British government's reluctance to give Catholics their rights and brutal police crackdowns on protests led to further rifts between the Catholic and Protestant communities, rifts that found expression in violent and ruthless paramilitary groupings on either side. The new courthouse in Belfast with its glass façade is now a testimony to the town's faith that the bombings have stopped for good after the Good Friday Agreement of 1998.

Belfast does give one a sense of a lively, bustling town that has come to terms with its troubles and now is thriving on young people's creative energy. It is in fact so post-conflict and hip that the Ulster Museum sells t-shirts that say "Peas Process" with a picture of a can of green peas printed on the front. Post-conflict Northern Ireland markets itself as a green country with a beautiful coastline and the jewel in the crown are the sites where the TV series "Game of Thrones" is being filmed. This is the picture you get when you visit official tourist sites with scarce information on the Black Cab tours, which take you up close to the murals and give you information on what the images mean. There are festivals throughout the year, and one held in August in particular has started to attract a lot of international attention and performers. It is the Feile an Phobail (The Community's Festival) in the Catholic part of town, a festival that started its life to celebrate the culture of the local Catholic community. As with all community projects, the festival seems to have been too successful for its own good and some residents will tell you that it is losing its local character.

Visiting West Belfast, the district most affected by the Troubles, is a strange tourist experience. The side walls of houses have larger than life paintings, not unlike those we see in pictures of Tehran, of political prisoners, paramilitaries and victims of paramilitary attacks. People go about their daily business in the shadow and light of huge painted faces staring down at them. It puts the tourist in a strange position of visiting a place for the troubles it has suffered, but in many ways are many pilgrimages not built on this principle, a past that locals may well want to put behind them?

Academics have two terms for the tourism that springs up in post-conflict places: Dark and phoenix tourism. Whereas dark tourism emphasizes the locations of the conflict, phoenix tourism tries to go beyond to celebrate the new vitality of the town - turning the streets where there was violent conflict into streets where people are dressed in colorful clothes, singing and dancing, as happens in Feile an Phobail. For some, phoenix tourism puts the emphasis more on forgetting than remembering; so while some people will be preparing for Feile an Phobail, others will be preparing for the 100th year anniversary of the 1916 Catholic uprising against the British, touching up the murals that celebrate the resistance. Apart from the murals, there are also little gardens of remembrance scattered on either side of the Catholic Falls Road. In one there is a huge map of West Belfast with street names that speak volumes: Balkan St., Cyprus St., Bosnia St., Serbia St., Osman St. and even a Balaclava St., another instance of intentional and unintentional black humor that pervades the city, in Belfast, elsewhere and its troubles always seem to be here.

When you walk through the gates into the Protestant area, that is, the Loyalist part of the city, even before you can spot the many Union Jacks that will follow you down Shankill Road, the first emblem of militant nationalism you will see is an Israeli flag in a banner celebrating Israeli-British military cooperation through the years. It is clearly a response to the murals dedicated to Palestinian prisoners on the Catholic side. A perverse logic of my enemy's friend's enemy is my friend seems to be at work here. Israeli flags often fly next to the Union Jack, the Union Jack itself covering the doors of some houses, pronouncing a very stern: "Thou Shalt Not Pass."

A couple of days in the still-divided town is enough to make one realize that when a peace treaty is signed, it does not mean that the two communities immediately start to interact and build a future together, it simply means the killing has stopped. How much work still needs to be done is made apparent in the news. Radio reports celebrate a handful of integrated schools where Catholic and Protestant children are educated together. This is a reminder of how different conflicts call for different solutions, as a separation rather than integration of schools along linguistic lines is suggested as part of the reconciliation process in Turkey.

One of the deadliest attacks of all the Troubles happened in Omagh in 1998 after the Good Friday Agreement. However, despite this attempt to derail the peace process, it continued to move forward. I know it is not the sunniest of thoughts but I would like to think that there is hope for Turkey as well, that even after the recent flare up of violence, the reconciliation process can get back on track and we can go on discussing the essential issues for peaceful coexistence.
Last Update: Aug 20, 2015 4:28 am
RELATED TOPICS