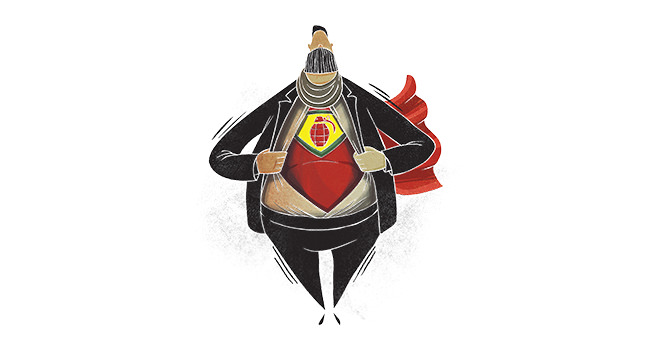 Although the political representation the public wants for the fate of the reconciliation process is provided with the HDP's success in passing the 10 percent threshold, the PKK still continues its terrorist attacks, ironically, again, with the party's support

At the time of writing this piece, the death toll since the PKK declared the end of the cease-fire on July 11 reached 55 people; including policemen, soldiers and civilians. The majority of the dead soldiers are actually civilians conscripted for compulsory military service. They are attacked usually by ambushes, using remotely detonated land mines. In Diyarbakır, PKK militants shot dead traffic police officers, who were lured into an ambush with a fake traffic accident report. In another incident, militants broke into the house of two policemen and shot them in the neck while they were sleeping. In Bingöl, a gendarmerie commander was shot in the neck at a market in front of his wife and daughter. Even hospitals and ambulances are being targeted in a wave of terror unleashed by the PKK.

If you remember, an uprising occurred in October 2014 - i.e., when a new government was formed immediately after the presidential elections - on the calls of the PKK and the Peoples' Democratic Party (HDP), a political party affiliated with it. Between Oct. 6 and Oct. 8, 53 civilian Kurds were killed. Despite public reaction, security forces have consistently tried to avoid contact with the terrorist organization and to maintain the non-conflict situation, since the reconciliation process began on Jan. 3, 2013.

Yes, the PKK did not raid security stations at the time, but continued its activities with acts like blocking roads (for identity checks), abducting people, setting up courts and holding trials, and occasionally killing people. Due to the importance of the process and popular support for it, negotiations continued through the imprisoned PKK leader Abdullah Öcalan on İmralı Island, to put an end to these acts of violence. Further, the PKK had even announced, upon Öcalan's call, just before the Oct. 6-8 incidents that it would not disrupt public security. The PKK gave a specific date when it would end such acts in the area and HDP Co-Chair Selahattin Demirtaş repeated the same statement.

It was in this atmosphere of peace that the Oct. 6-8 massacre occurred. Everyone was shocked. A legitimate party, which had a group in Parliament, namely the HDP, called for an uprising and surpassed even the PKK with its uncompromising attitude. Scenes resembling a civil war were staged in over 20 cities. Crypto-Gülenist elements in the police did all they could to stoke this fire.

However, during the presidential election process both Recep Tayyip Erdoğan and Ahmet Davutoğlu had described the Reconciliation process as one of their primary goals and stated that they would not retreat from it no matter regardless of how big the cost turns out to be. A short while ago, a law on the reconciliation process that authorized the Cabinet and the National Security Council (MGK) regarding this issue had been enacted thanks to the Justice and Development Party (AK Party). Thus a legal basis was created to integrate the PKK members, who had not been involved in crimes, back into the society, together with village guards. The only task remaining to be completed was the PKK fulfilling its promise about pulling out of Turkey, which it made upon Öcalan's request in a statement on May 8, 2013, in its base in the Qandil Mountains before the representatives of the world media. Because the PKK had announced earlier that it stopped withdrawing its fighters, which it began unwillingly doing on June 10, 2013 with a small force. Besides, it also added that those fighters that had pulled out of Turkey had been sent back.

Meanwhile, a series of reform packages, including a democratization package on Sept. 30, 2013, were introduced. While working on that package, the AK Party government and then Prime Minister Erdoğan proposed to abolish the 10 percent election threshold or reduce it to 5 percent and to introduce a single-member district system. Again, the criterion for political parties to receive treasury grants was changed from getting 7 percent of the vote to 3 percent.

Also a law allowing those PKK members who had not been involved in crimes to engage in politics was passed. (For detailed information about the process, visit http://setav.org/tr/kurt-meselesi/zaman-cizelgesi/5631).

What were the reasons for the PKK and HDP disrupting the reconciliation process with such determination? Because the process did not go as they planned? Even so, all avenues of political participation were open and there was no need to resort to violence. Besides, it was the PKK that did not keep its promises, halted its withdrawal from Turkey and insisted on illegal acts. Again, it was the HDP, the PKK's political arm, that tried to legitimize all this. And the process was not proceeding slowly, either. An objective observer would say that the government, which was trying to continue the process alone while facing provocations instead of getting support from the opposition and media, was more patient, determined and quicker than expected under these conditions. The truth is that what brought the process to a deadlock and rendered the government vulnerable to criticism from the public was the PKK's halting the withdrawal of forces and blocking the road.

The PKK, the Democratic Union Party (PYD) - the PKK's Syrian offshoot - and the HDP tried to mask their unwillingness and opposition regarding the process, by accusing Turkey of aiding the Islamic State of Iraq and al-Sham (ISIS). The essential logic behind the process was to ensure the union of Turks and Kurds within the framework of equal and democratic citizenship under a new constitution. That project was the most rational alternative compatible with the realities of the region and the country.

The AK Party's reforms have not only ended the denial of the Kurdish identity in the country but also exponentially increased public investment into the region, while removing the obstacles to teaching and speaking the Kurdish language. So that the Ministry of Culture itself published Kurdish books, universities opened Kurdology institutes, and private Kurdish language courses acquired an official status.

The PKK and HDP could disrupt this positive atmosphere and end the Kurds' support for the reconciliation process only through a single instrument: Nationalism. They have partially succeeded in this through equating the AK Party with ISIS and through continuous disinformation. Thus they have created a pretext for ending the reconciliation process. The PKK was allowed to start a coup process together with domestic and foreign alliances that are unable to compete with the AK Party politically.

But these unethical political machinations are not likely to achieve results. Yes, unfortunately massacres against citizens have begun again. Erdoğan and the AK Party government have put a lot of effort into preventing this. So much so that they are accused nowadays of being too lenient. But this had to be tried. Thanks to the AK Party, for the first time in the Republican era the state has treated the Kurds compassionately, equally and justly. There will be no change to this policy. However, the fight against the PKK will certainly continue until it lays down its arms.

The PKK is a subcontractor organization that holds the Kurds hostage. It is a burden on the shoulder of Kurdish people. I hope we will emerge from this fight against the ghosts of the 20th century with minimal damage and achieve a peace atmosphere soon, in which there is a perfect balance between security and freedom.
Last Update: Aug 26, 2015 7:31 am
RELATED TOPICS