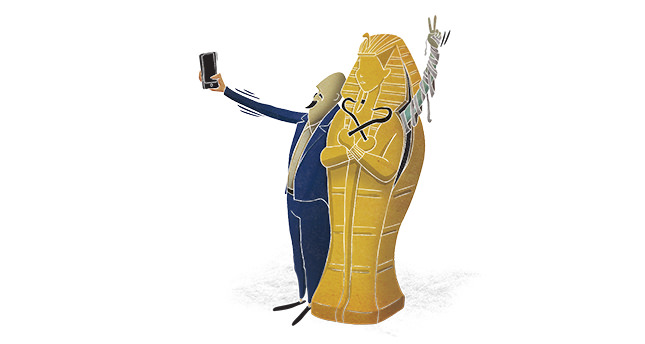 Western media outlets, based on the West's centuries-old hate of the East, carried out a treacherous plan through the portrayal of Egyptian coup leader el-Sissi as a representative of democracy while portraying the democratically-elected President Erdoğan, who received 52 percent of public votes as a dictator

The malicious Western campaign orchestrated against President Recep Tayyip Erdoğan before the June 7 parliamentary elections and the gleeful reactions after the results in some Western capitals and Zionist circles expose the level of wickedness that exists in the minds of Turkey's detractors. Former Israeli President Shimon Peres could not contain his happiness at the fact that the ruling Justice and Development Party (AK Party) lost its parliamentary majority.

At the same time, many Western leaders were busy wooing Egyptian coup leader, President Abdel-Fattah el-Sissi, a notorious human rights offender and mass killer. Sissi's crimes have been documented even by the West's Human Rights Watch, Amnesty International and other organizations. When the Saudi and United Arab Emirates- (UAE) funded Egyptian dictator takes draconian control of the media in Egypt, we do not see the Committee to Protect Journalists (CPJ) and Freedom House making the kind of noise they create when incidents involving journalists happen in places not run by Western-allied stooges.

It is astonishing to see how vigorously leading Western media outlets campaigned against the ruling party in the parliamentary elections in Turkey. These people were able to conduct their foul business because they enjoy tremendous freedom of movement and access in Turkey. These Western journalists vilify the host country while enjoying a good life in its vibrant cities without the kind of fears they would have in most Arab dictatorships. The same kind of behavior would have landed them in prison in Abu Dhabi, Riyadh and Cairo.

The Economist poured out its vitriol thusly: "Mr. Erdogan has become increasingly intolerant, nationalist and autocratic, especially since a harsh crackdown on protests in Istanbul's Gezi Park two years ago."

The British magazine further said: "So voters should not give AK [Party] the supermajority that would allow it to set about such change on its own. Instead, they should back an opposition party."

The New York Times - the U.S. paper that employs staff whose children serve in the Israeli army but does not let its readers know these secrets - compared Erdoğan to his Russian counterpart. "Like Vladimir V. Putin of Russia, who swapped the presidency for the prime minister's seat before returning to the Kremlin four years later, Mr. Erdogan is his nation's top authority, no matter which position he holds," it reported on June 4.

There are many reasons why Western journalists do not like the Turkish president and the AK Party.

In the recent case of the detention of Al-Jazeera journalist Ahmed Mansour in Germany, Erdoğan vehemently criticized the German action, and Prime Minister Ahmet Davutoğlu spoke twice to Mansour's lawyer. Perhaps a few other world leaders were also upset with Germany's actions, but Erdoğan was the only head of state to have the guts to speak up. The Middle East is full of treacherous, spineless, Zionist-fearing, Sissi collaborators. We do not expect honorable conduct from them.

Erdoğan criticized U.S. President Barack Obama on his prolonged silence on the brutal Chapel Hill killings in U.S. where three young Muslim students were murdered by a white Christian terrorist. The U.S. state machinery keeps killing black people with impunity. Later, Obama did condemn the killing of the Muslim youth.

The West has already broken the records of hypocrisy in the case of Sissi's murderous regime.

Sissi happened as part of a grand plan. The Western gangs in colonial capitals were looking for suitable collaborators to replace longtime dictators toppled in the Arab uprisings. They found Sissi as their best bet in Cairo, more cruel and brutal than his rickety predecessor, Hosni Mubarak. In Turkey, during AK Party rule, Western influence in Turkish politics has declined tremendously, and the nation has started charting an independent foreign policy. Thugs like former British Prime Minister Tony Blair and his Zionist associates are not allowed to conduct their shady deals in Istanbul and Ankara so they must find new safe havens in Abu Dhabi, Cairo or Israel.

French President François Hollande has enthusiastically condoned Sissi's brutality and achieved the very first sales deal for the troubled Rafael fighter aircraft. The deal will be funded with Gulf money as Egypt's dictator is busy extorting money from the vulnerable, oil-rich states.

Other democracy pretenders have rushed to endorse Sissi's coup. U.S. Secretary of State John Kerry has audaciously praised the junta regime for "restoring democracy." The then-EU foreign policy chief, Catharine Ashton, praised Sissi for continuing on the "journey towards a stable, prosperous and democratic Egypt." Obama responded to Egypt's coup by saying that "democracy is about more than elections." That is the kind of shameless Western politicians we are dealing with. It will not be easy.

Italy and Spain are also not far behind in praising Sissi's dreadful regime. Italian Prime Minister Matteo Renzi called Sissi a "great leader" and the Spanish king honored Sissi by inviting him to Madrid. They do not even pretend to practice what they preach. We know the West, so why does their behavior surprise us?

Then Western media comes up with its outlandish theories and reports about Turkey. They have been touting the latest election results as a reprimand to Erdoğan's supposed ambitions of greater authoritarian rule. Some of them go to the extent of supporting the bloodthirsty PKK terrorist group that gets European backing. They see a champion of democracy in the Peoples' Democratic Party (HDP), which is an extension of the terrorist PKK. They forget that it is the AK Party and Erdoğan that have done so much to find a political solution to the Kurdish issue in Turkey.

Does a dictator allow such free and fair democratic elections to be held? Turkish voters have greater freedom to choose their leaders in genuine elections and have genuine choices on the ballot than some so-called great democracies of the West.

The Turkish election showed how Western media outlets have become purveyors of lies and deceit when it serves their colonial interests. If they had any shame, they would have at least acknowledged that the AK Party conducted free and fair elections and respected the mandate.

But let's not expect honest conduct from those who have historically been treacherous.