How to revive the reconciliation process 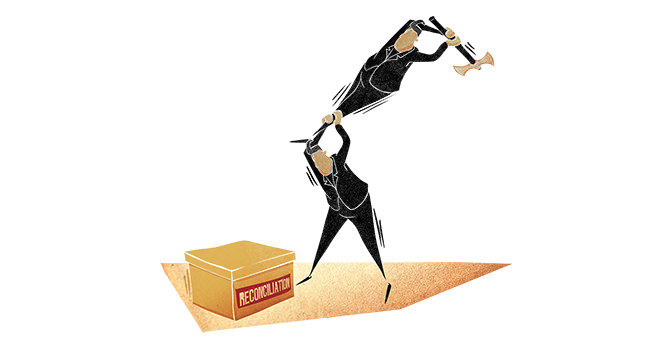 Ankara faced the betrayal of the HDP when the party made statements supportive of the PKK's terrorist attacks, ignoring the reconciliation process. Now, the government is alone but still determined to continue the process despite the party's actions

The recent surge in terrorist attacks in Turkey clearly proves the unwillingness of the Peoples' Democratic Party (HDP) to stop the violence and interrupt the reconciliation process launched by President Recep Tayyip Erdoğan in 2005 in a move to end the decades-long Kurdish problem through further democratization underpinned by stronger rule of law. Despite the fact that the Justice and Development Party (AK Party) governments, led by Erdoğan since 2002, put into effect major democratic reforms to solve the problem always exploited by some foreign and domestic powers to undermine Turkey's progress; the HDP and the PKK have always taken a negative and provocative stance to abuse the process for their violence-oriented and separatist agenda. Especially in the run-up to Turkey's last general elections in June, the HDP opted for involvement in a perception conspiracy to disrupt the political stability in the country, adopting a pathological and unreasonable anti-Erdoğan attitude, and the sheer lie of the government's support for the heinous the Islamic State of Iraq and al-Sham (ISIS) terrorist group, the focal points of its whole election campaign. By adopting this course of action, the HDP and the PKK intentionally sabotaged the reconciliation process because they turned Erdoğan and the government - the actual initiators and maintainers of the process taking the great risks associated with it - into their primary target in sync with their cohorts from abroad and at home.

Unrest in Syria and the peace process

Since the beginning of the unrest in Syria, Turkey has always called for the international community to extend stronger support to the moderate Syrian opposition groups, warning that otherwise radical terrorist groups will gain ground in the country to the detriment of both the Syrian people and the wider region. In recent news, the former head of the U.S. Defense Intelligence Agency (DIA) said in an interview with Al Jazeera that Washington was monitoring the rise of radical groups that ultimately transformed into ISIS, but turned a blind eye to the warnings from the agency on purpose, thus paving the way for ISIS gathering considerable strength in a short period of time. "I think it was a decision. I think it was a willful decision," he said. This is in line with Turkey's earlier warnings I mentioned above. I think those who disseminate completely false claims of Turkey's support to ISIS have something to learn from this statement. Also, Turkey recently came under attack from ISIS, started sweeping security operations against the terrorist group, and launched airstrikes against ISIS targets in Syria. The terrorist group continues to broadcast video footage threatening Turkey.

During the months and especially the days prior to Turkey's general elections early last June, news articles or social media postings claiming in chorus that Turkey supports the heinous terrorist group and became a mere spectator to the slaughter of Kurds in Syria's Kobani by ISIS militants spread like wildfire. In fact, the truth was the other way around. Turkey is among the very initial countries to declare ISIS a terrorist organization, and has taken all the necessary measures to block foreign fighters joining the terrorist group contrary to what is claimed by some vicious domestic and foreign circles. Also, it was Turkish government that allowed northern Iraqi Peshmerga forces equipped with heavy weaponry to cross into Kobani via Turkey to help protect the embattled Syrian city and its residents against ISIS. Turkey has also taken in some 200,000 refugees from Kobani who fled the ISIS attack, and gave them shelter at refugee camps along its Syrian border. Since the outset of the civil war in Syria, Turkey has always followed an open border policy when it comes to civilian refugees fleeing unrest in the neighboring country regardless of their ethnic, religious or sectarian backgrounds, and now it hosts some 2 million Syrian refugees without noteworthy support from the international community.

Who is willing to solve the problem?

In no uncertain remarks, both President Erdoğan and Prime Minister Ahmet Davutoğlu have repeatedly ruled out claims of Turkish support for ISIS, and firmly stressed that Turkey sees the terrorist group as a growing threat to its national interests. This was part of the campaign aiming to create misperceptions about Turkey's policy concerning ISIS, and by this means, to harm trust between Erdoğan and Kurdish voters at home. This campaign was translated into more votes for the HDP in June 7 general elections, and the HDP was used by some foreign and domestic actors as a tool to end single-party government in Turkey, thus concluding more than 10 years of political stability in the country, an indispensable component of steady and sustainable economic growth.

President Erdoğan started the reconciliation process, and thanks to this process many democratic reforms were put in place to solve the Kurdish issue. No one could even dream about these democratic reforms before 2002. The state of emergency that has remained in effect in the region for years was abolished. The government made huge investments in Turkey's southeastern provinces in spite of all the obstructive efforts by the PKK and its affiliations. As stressed above, the HDP's Co-Chair Selahattin Demirtaş and his party have always taken a negative and provocative stance concerning the reconciliation process as laid bare in the violent events of Oct. 6 - Oct. 7, 2014 that claimed the lives of some 50 people. It is extremely unfortunate for our country that the HDP and Demirtaş continue their provocative stance repeating baseless claims in the foreign media that Turkey extends support to ISIS.

The HDP based its entire election campaign on morbid anti-Erdoğan sentiment in a bid to receive votes from "white Turks" who only share that sentiment with the HDP. To put it differently, throughout the election campaign, the HDP and its leadership cadre sided with the circles who are steadfast opponents of the reconciliation process while unfairly attacking President Erdoğan, the architect of the process, with false claims. This is a clear indicator of the HDP's insincerity with the reconciliation process. Also, the PKK has always declined to lay its arms and withdraw its armed militants from Turkey. Even prior to the elections, the leaders of the terrorist group based in northern Iraq made repetitive negative statements on the reconciliation process declaring the end of nonviolence period.

One thing should be noted here, that is, throughout the election campaign, the HDP's Co-Chair Demirtaş was given remarkable support by the media outlets of the Doğan Media Group completely ignored the provocative role played by Demirtaş in the incidents on Oct. 6 and Oct. 7, and downplayed the HDP's reluctance to distance itself from the PKK. Instead of doing this, the HDP has always adopted a provocative and unconstructive role in the reconciliation process, and shied away from calling on the members of the terrorist group to lay down their arms. Just until several years ago, the HDP was leveling harsh criticisms at the parallel state structure saying that a state administrated by a parallel organization couldn't be accepted, but during the election period it engaged in a full-fledged cooperation with the same structure that is also active in Turkey's southeast making provocations to put the government into trouble.

The HDP has been standing at an absolutely pivotal crossroads in our nation's history, and either they will choose to side with their country or to be a practical and disposable instrument for certain foreign and domestic circles aspiring to destabilize Turkey, and to derail its democratic and economic progress. Unfortunately, entrance into Parliament with a stronger say didn't help the HDP become a truly democratic party. The main responsibility with the recent escalation of violence in our country lies with the HDP who is continuing to make irresponsible, polarizing and provocative statements. The reconciliation process cannot continue with the

HDP acting as outlined above. To revive the reconciliation and peace process, it must immediately distance itself from the PKK, dispense with the provocative use of language, stop complaining about their country abroad, and respect the democratically elected president of the country. Turkey will proceed with the reconciliation process and democratic reforms taking all necessary measures to ensure public order and security. However, things cannot continue as if nothing happened it interrupts the peace process.