America's proxy war against itself in the Middle East 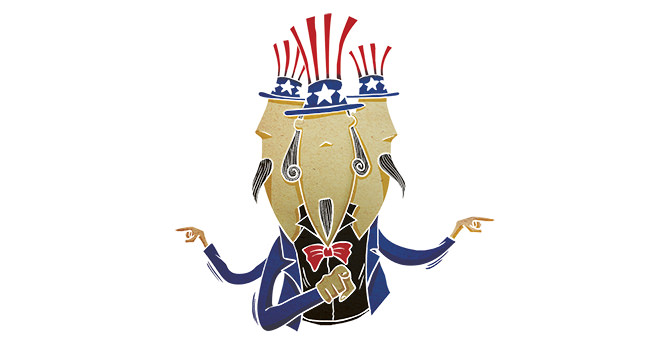 U.S. policies, supporting all fronts fighting one another in the Middle East only for its own gains, cause great chaos in the region. Hence, the U.S. has to produce its foreign policies responsibly as it claims to be fighting for a permanent peace

Turkey's decision to start bombing both the Islamic State in Iraq and al-Sham (ISIS) and the PKK has once again thrown into sharp relief the myriad complexities of contradictory alliances and agendas present amid the ongoing chaos in the Middle East. The U.S. in particular has put itself in a situation where it is simultaneously supporting, at least implicitly, actors that are opposed to each other. As U.S. comedian John Stewart aptly observed a few months ago, it sometimes appears that the U.S. is fighting a regional proxy war against itself - along with a few other more unsavory metaphors regarding the consequences of such actions.

At the time, Stewart was referring to the apparent incongruity of backing the Saudi-led coalition bombing Houthi rebels, allegedly backed by Iran, in Yemen, while concomitantly fighting in a de facto alliance with Iran supporting the Iraqi government against ISIS. While the threat of war with Iran has receded in light of the recent nuclear agreement with the P5+1, let us not forget that Iran is the principal backer of Syrian President Bashar Assad, and the West has been demanding his head on a platter for years now. Moreover, Iran now wants to join the international coalition against ISIS while unsubtly opining that the international community must take the fight to the jihadists in Syria. Although it is patently true that there is not much use confronting ISIS only in Iraq, the Iranian agenda clearly includes removing the ISIS threat to the Assad regime. One of the ironies of the conflict(s) in the Middle East is that although ISIS is the one actor in the Middle East that pretty much everyone else purports to be fighting, this ostensible point of agreement does not seem to have done much to degrade the movement's capabilities.

Turkey's bombing of the PKK similarly highlights the Kafkaesque nature of political interactions in the region. So let us recap what led us to this juncture: A presumed ISIS suicide bombing against Kurds occurred in the Turkish border town of Suruç on July 20 and the PKK then murdered several Turkish police officers in retaliation. To reiterate, the PKK attacked for a bombing presumed to be the work of ISIS while accusing the government of being in cahoots with the group. Meanwhile, the government announced that it would join the fight against ISIS as a result of the same bombing in Suruç. The government then announced a deal with the U.S. allowing it to use the İncirilk Air Base. Ostensibly, this is in exchange for establishing a buffer or safe anti-ISIS zone in Syria extending from the Euphrates to Aleppo.

Under cover of this agreement, the government then directed the majority of its airstrikes against PKK bases in the Qandil Mountains in Iraqi Kurdistan. The U.S. and NATO support Turkey's right to do so, all of which sounds fair, right? After all, the PKK is listed as a terrorist organization by the U.S., has fought an insurgency against the Turkish state for 30 years leading to the deaths of around 40,000 people and undoubtedly the movement did provoke these attacks by murdering several Turkish police officers. Dozens of members of the Turkish security forces have been killed since. Despite the uproar over Turkish actions against the PKK in the international media, let us hypothetically apply a similar situation in a Western country where an organized militant group kills a number of police and the government knew the location of its bases, I think we all know what the result would be.

Now here is the rub. The PKK has also been essential in the fight against ISIS through its support of the Democratic Union Party's (PYD) People's Protection Units (YPG) in Rojava - the Kurdish majority areas of Syria -and the Kurdistan Regional Government (KRG) peshmerga forces from Iraq. Both of these entities have been working in close cooperation with U.S.-led airstrikes to contain and roll back ISIS. The KRG, in addition, receives arms and military training from a variety of Western powers. Both the YPG and peshmerga forces have been repeatedly lauded in the international press for being the most effective military forces on the ground and Washington's most reliable allies in the fight against ISIS.

The YPG in particular have been especially effective as they not only inflicted the first major defeat for ISIS - with intensive U.S. air support - through its months long defiance during the siege of Kobani, but they have also pushed back ISIS in a variety of other areas such as the border town of Tal Abyad, thus uniting two of the three self-declared autonomous cantons of Rojava. The catch? The YPG is the armed wing of the Syrian-affiliate of the PKK. Indeed, a variety of reports suggest that the two are more or less the same thing, a movement, as noted, that the government has declared open season on U.S. support. Moreover, the proposed safe zone is situated between the Syrian Kurdish cantons of Kobani and Afrin, so this will prevent the YPG from uniting these areas.

Unsurprisingly, many Kurds see Western support of Turkey's actions against the PKK as a betrayal. As a result, recent reports have suggested that this may cause the PKK to turn to Iran for assistance. Indeed, acting PKK political leader Cemil Bayık has previously indicated his preference for working with Iran. In short, not only is the U.S. Turkey's ally in the fight against the PKK, but also, paradoxically, it is an implicit ally of the PKK through its support of the YPG.

Adding more fuel to the fire is the support of U.S. allies Saudi Arabia, the United Arab Emirates (UAE) and Qatar for Jaish al-Islam - the alternative coalition of jihadist groups in Syria opposed to the Assad regime in which the official al-Qaida affiliate, al-Nusra Front, plays a prominent role. In practice, however, al-Nusra's principle point of difference with ISIS seems to be that a simple bullet will suffice for executions in contrast to the elaborately choreographed cinematic extravaganzas produced by ISIS. Ideologically, ISIS and the al-Nusra Front are kindred spirits; their major disagreements surround tactics and leadership.

All of this leads to an extraordinary situation in the Middle East where it is unclear who is supporting whom. In brief, the U.S. is working with Iran in Iraq, whereas in Syria and Yemen the U.S. and its allies are fighting against Iran's interests. Similarly, the U.S. is a de facto ally of the PKK in the defense of the KRG and Rojava, yet it also acknowledges Turkey's right to attack the PKK and prevent Syrian Kurds from uniting. I do not envy U.S. policy makers trying to chart a course through the pandemonium currently engulfing the Middle East, but working out whose side they are on and having a clear picture of what they want to achieve might be a good place to start. Until these very basic steps are achieved, contradictory competing interests mean that the U.S. will continue to fight a de facto war against itself in the region.

* Dr Tristan Dunning is an honorary research fellow at the School of Historical and Philosophical Inquiry at the University of Queensland in Australia and publisher of Hamas, Jihad and Popular Legitimacy: Reinterpreting Resistance in Palestine​
Last Update: Sep 01, 2015 8:13 am
RELATED TOPICS