Will Aylan's dead body jolt the West out of its slumber? 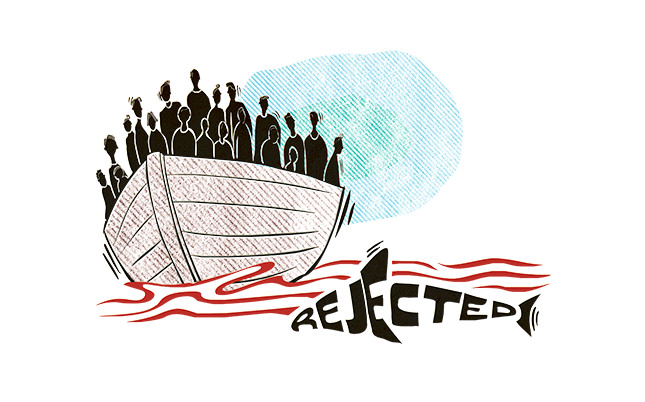 Although the world is becoming accustomed to the discriminatory attitudes of the West, perhaps recent developments and calls from Turkey could make it change its tack, which thus far has exceeded the limits of humanity

Turkey's views about how to end the war in Syria and Iraq have ended up being vindicated. From the start of the Arab Spring, and particularly with reference to Syria, Iraq and Egypt, Turkey has insisted that legitimate, democratic and broad-based popular governments should come to power in these countries and that state authority and collapsed bureaucracy should be restored with the help of the West. Actually, what Turkey has proposed amounted to creating a new legal framework in the Middle East and helping to heal the wounds inflicted by the colonial past and mindset. The policy of stoking sectarian tensions in countries that had been carved out of former Ottoman provinces arbitrarily through treaties like the Sykes-Picot Agreement, and leaving these nations to the mercy of secular, pro-Western dictators has become unsustainable in the 21st century. The Arab Spring was essentially a revolt of Muslim Arab societies against that.

It was noted that the U.S. followed an ambiguous line toward the Arab Spring for a long time and failed to adopt a clear strategic stance. On the other hand, Europe vacillated between the positions of France and Germany, but France's insistence that Bashar Assad's regime should go away was eliminated after the Charlie Hebdo attack.

The West has thus come to a crossroads as a whole regarding the Arab Spring and the issue of the Middle East and Islam. It would either perceive this as an opportunity to defuse the tensions in the region and ensure Israel's security not through war, but peace, or maintain its familiar century-old position.

It was misfortune that the Arab Spring coincided with the decision of the U.S., leader of the Western world, to retreat from Iraq and the Middle East under U.S. President Barack Obama. The U.S. had invaded Iraq when it should not have and left it when it should have stayed. Moreover, it had left behind a country governed by a sectarian Shiite leader, then Prime Minister Nouri al-Maliki.

Obama's pledge to pull troops from Iraq and Afghanistan, a cornerstone of Obama's election campaign, was appropriate and humane in principle. But withdrawing from a country, where the social fabric disintegrated, sectarian mistrust peaked and state authority totally vanished without normalizing it, was not an issue about which the U.S. could just make a fait accompli, turn its back and leave for good. Indeed, when the civil war in Syria broke out and spread to Iraq, the U.S. faced this grim reality. It would take an adaptation process to change a century-old status quo. After supporting the Free Syrian Army in 2010 along with Turkey, the U.S. abruptly turned its back on the region and left Turkey and Qatar alone. Thus, while Turkey has saved more than 2 million refugees from death by admitting them, the U.S. has simultaneously tried to induce Turkey by using the Islamic State of Iraq and al-Sham (ISIS) as a stick to take on the role of foot soldier, which it has persistently avoided itself.

Turkey's offer was simple and rational: Pluralist and democratic popular governments should be created in Iraq and Syria, collapsed state structures and economies of these countries should be restored. While doing all this, ISIS should be isolated through creating safe zones and Syrians and Iraqis should be helped to remain in their own countries.

So Turkey warned that bombing ISIS would only aggravate the problem and strengthen the Assad regime and Iran under the pretext of fighting ISIS in Iraq and Syria. In fact, since Turkey's proposals had not been put into action at the right time, Sunni communities and tribes that were wary of Shiites have supported ISIS, the number of moderate dissidents joining ISIS has increased and former Baathists have allied with ISIS.

Today, Turkey has millions of Syrian and Iraqi refugees regardless of their race, ethnicity or faith, but Europe tries to figure out how to get rid of 300,000 refugees in total. The dead bodies of Kurdi brothers - Ghalib, 3, and Aylan, 2 - which recently washed ashore on a beach in Turkey's Aegean coast shook the Western public. However, Hungarian Prime Minister Viktor Orban actually denied the fundamental principles of Christianity by saying: "We cannot admit non-Christian refugees," and tried to legitimize an unethical and discriminatory attitude by referencing Christianity. Meanwhile, U.S. State Department spokesman Mark Toner said, when responding to a question by reporters about the topic, that the U.S. had admitted 500 refugees since the war in Syria erupted and that after the tragic deaths of Aylan and Ghalib they decided to receive 300 more refugees.

Yes, these statements sound like a joke, but they are not.

If Turkey had not been left alone, 300,000 Syrians might not have died and ISIS may not have emerged at all. Targeting Turkey instead was very unjust and unfortunate.

We are passing through a period when we feel ashamed of humanity on behalf of Western democracy. Turkey maintains its open-border policy despite its limited resources. When writing about these days 50 years later, future historians will probably argue that the West betrayed its own values and that Turkey's ethical stance defended hope during a dark period on behalf of humanity.

Sadly, the Mediterranean and Aegean turned out to be seas where not only refugees, but our humanity also drowned.

"When I saw that picture, it was in a family setting. Unfortunately, my children and my grandchildren, they saw the picture at the same time as me. We were devastated and we asked ourselves: Where is humanity? Where is the conscience of humanity?"

Anderson asked Erdoğan who is to blame for this to which he replied: "To be honest, the whole Western world is to be blamed in my opinion on this issue." When asked if he accuses the West of turning the Mediterranean into a refugee cemetery, Erdoğan responded: "That's the reality on the ground."

The West's neglect of the issue has played a big role in leading millions of refugees to a journey to death causing them to wash ashore due to a failure to solve the problem at its source and in a timely manner.

It's impossible for Turkey to solve this problem on its own. Worse still is to constantly accuse Turkey, apart from leaving it alone, of supporting ISIS, i.e., an anti-Islamic organization that issued a so-called death warrant for Erdoğan. Thus they treat Turkey, their most important partner, unfairly and waste an opportunity to work together.

The agreement between the U.S. and Turkey to create a safe zone along the Syrian border in an area extending from Jarabulus to Azez is a positive development. The dead bodies of Aylan and Ghalib washing ashore should serve as a signal flare for preventing a third world war, stemming the flood of refugees into Europe and preventing Muslims in Europe from becoming ISIS sympathizers.

A prospective human-based approach would relieve both the Middle East and Europe. Those who have lost the ability to adopt an ethical and humane approach to the issue should at least realize that this fire would not be confined to Syria or Iraq, but engulf the whole world, and immediately resort to a policy change for their self-interests.
Last Update: Sep 08, 2015 2:04 am
RELATED TOPICS