Women say no to terror: Enough is enough! (Edi bese) 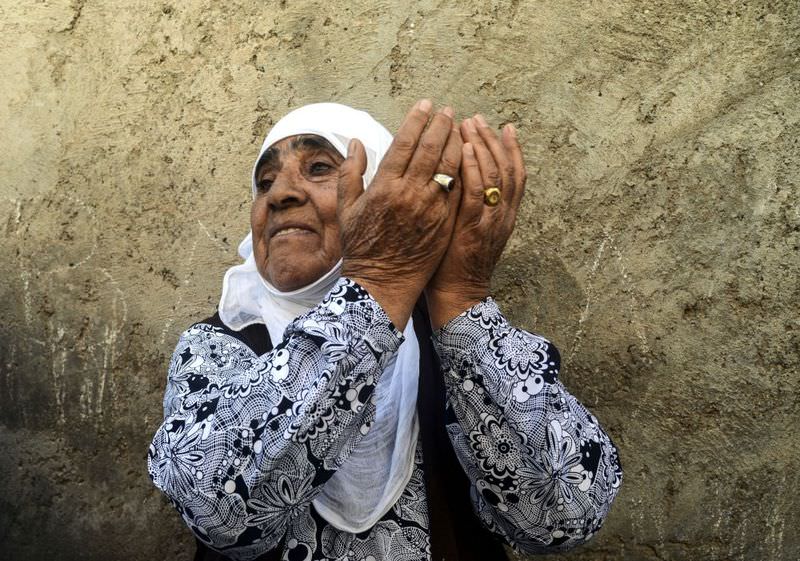 Kurdish women as individuals, mothers, wives, sisters or daughters in the southeast suffering immensely PKK terror in particular, due to, among other things, the loss of loved ones, are the first to shed tears

As a nation we are currently confronted with multiple threats from several terrorist groups. An economic and political island of stability for more than a decade in a region exasperated by incessant turmoil, Turkey now risks being destabilized through terrorism. Some vicious domestic and foreign circles think that they have finally found the opportunity to stimulate chaos in the country, taking advantage of the political atmosphere of uncertainty following the last general elections that resulted without a single party government. In this sense, they make deliberate efforts to completely derail the reconciliation process initiated by President Recep Tayyip Erdoğan in 2005, when he was prime minister, to solve the longstanding Kurdish problem with further democratization and stronger rule of law, so as to peacefully defuse the threat posed by the terrorist PKK, which had claimed thousands of people's lives since the early 1980s. Among major democratic reforms, introduced by the Justice and Development Party (AK Party) government to solve the problem since it came to power in 2002, include changing the state's merely security-oriented approach to the issue, the abolition of emergency rule in the country's southeast, the repeal of restrictions on the use of the Kurdish language in different contexts, launching Turkey's first 24-hour Kurdish language TV channel, allowing elective Kurdish language lessons in public schools, giving permission to the opening of private Kurdish language courses and authorizing the establishment of Kurdish language and literature departments at universities. The AK Party government also made huge economic investments into the majority Kurdish southeast of the country more than all previous governments put together, despite disruptions by the PKK and its affiliates, in which they introduced highly important judicial reform packages in relation to the different features of the problem, enacted a legal framework to give the reconciliation process a firm legal infrastructure and formed the Wisemen Committee, a group of renowned writers, academics, columnists, intellectuals and civil society figures, to facilitate the process.

Turning a blind eye to all these democratic reforms and sincere political efforts exerted by the AK Party government to solve the problem, the PKK and its political affiliate, Peoples' Democratic Party (HDP), have always adopted a provocative stance concerning the reconciliation process. The insincerity of the PKK and the HDP concerning the reconciliation process was first unmasked by the violent events of October 2014 that left some 50 people dead and then again by the course of action embraced by the HDP and the PKK before and after the general elections in June of this year. Throughout the election campaign and in its wake, the HDP has continued to poison the process by spreading black propaganda about Ankara's support for the inhumane Islamic State of Iraq and alSham (ISIS) terrorist group.

Jumping at the chance following an ISIS suicide bombing in the southeastern province of Şanlıurfa in the town of Suruç, the PKK renewed its assaults and killed two police officers that were shot while asleep at home. In fact, there were many violent and disorderly incidents of various sizes performed by HDP sympathizers, PKK militants and the operatives of other organizations affiliated with the PKK since October last year, which was marred by the abovementioned events instigated by a social media call from HDP CoChair Selahattin Demirtaş. With his party officials and deputies, Demirtaş has kept his outright provocative stance, some HDP mayors and officials even made procivil war statements in recent months--, and he is still continuing to make inflammatory statements based on groundless claims in stark contrast to the party's official line laden with lip service to the reconciliation process. Simultaneously targeted by a number of terrorist groups, including the PKK and ISIS, Turkey has been conducting highly formidable and resolute military operation and police crackdowns against them since July, trying hard to keep the delicate balance between security and democracy. The government is determined to continue with both the democratization and reconciliation process and to effectively maintain public order. Those who want to turn the clock back in terms of democratization and the reconciliation process will be condemned to hit the wall, and Turkey will resolutely proceed on its journey toward a more prosperous and democratic future.

When talking about the terrorism threat facing our country, the human aspect of the matter, I believe that women must be given special importance. Terror is an issue that cuts across the whole of society. Women in particular suffer immensely from terror due to, among other things, the loss of loved ones, and they are the first to shed tears. Putting an end to mothers' grief and tears was one of the main motivating factors behind the reconciliation process from the very beginning. For this reason, the process was well received and strongly supported by women in general, and mothers in particular. This is also why women can and must play a critical role in advancing the reconciliation process to put an end to the era of PKK terror once and for all.

As mentioned above, the Wisemen Committee also contains leading female figures from various walks of life, as not all "wise men" are men. The committee was established as a civil initiative and divided into subcommittees with nine members for each of Turkey's seven regions. Women taking action in the reconciliation process through the committee charged with dispelling the misperceptions about the process, as well as receiving firsthand information about the process related developments and the expectations of the people, is something that must be given more attention for the betterment and consolidation of the process in the months ahead. In other words, women must be more active in all phases of the process, building bridges of friendship, unity and solidarity in close contact with the people across our country. This point was firmly stressed by İffet Polat, the president of the AK Party's Istanbul Women's Branch, when asked about the role of women in putting an end to terrorism threatening our country in an interview with A Haber, one of the most watched news channels in Turkey. Referring to the fact that our Turkish and Kurdish citizens have many more things in common than differences, she said our past and future cannot be imagined separately from one another. Stressing that Turks and Kurds lived on this land together for centuries, they fought side by side in the Battle of Gallipoli, shed blood together during the War of Independence and established the Republic as the two founding elements of this nation, Polat said: "The threat of terrorism facing Turkey has to be eliminated. Women must take the lead in the struggle against terrorism, look out for their children, and say enough is enough [edi bes e in Kurdish]." In related news, the AK Party's Beylikdüzü district organization in Istanbul organized an event called "I Understand My Kurdish Brothers and Sisters" - Ez Ğuşke Hu Fam Dikim in Kurdish - to raise awareness about the life and hardships of our fellow Kurdish citizens threatened by PKK terror.

Such events or initiatives must increase in number, and women especially from the country's southeast must have more opportunities in mass media and the national press to make their voices heard by the public. A program called "Women Say No to Terror", broadcasted on A Haber, constitutes an important example in this respect. On this program, Kurdish women from eastern and southeastern Turkey talk about what it is like to live in a region plagued by PKK terror for decades, their grievances caused by this terror, and their expectations of the reconciliation process. These kinds of programs help us better comprehend the life of Kurdish women as individuals, mothers, wives, sisters or daughters in the region. There are extremely painful stories showing how the people of the region come face to face with not only physical violence, but also psychological violence at the hands of the terrorist group. These real stories told through firsthand accounts speak volumes about the common destiny and deep-rooted values shared by this country's people, both Turkish and Kurdish alike. They also underline the fact that our nation stands in solid unison as an indivisible whole despite the PKK's 30-year separatist terrorism.

There are a number of initiatives for women in the region to stop terrorism. Women from the region are genuinely looking for ways to engage one another to react to the ongoing violence conducted by the PKK and its extensions. A white scarf symbolizes their honor in the region, and it is used as an instrument of peace. If there is hostility between two families in the southeast, an influential woman throws her traditional white scarf on the ground to force the sides to restore peace. This highly symbolic and old gesture is lately being used to protest against the terror that has again showed its ugly face to the detriment of both the region in particular and country in general. Also, sit-in protests by women whose children were abducted by the PKK to the mountains should be mentioned. The stories of these women and their children show us a heart breaking sequence from life under the threat of terrorism in the region.

A participant of the program with an upsetting face told about her experience: "I was born in Malatya and finished primary school there. Our mom was Kurdish and she was covering with a veil. Before the reconciliation process, we obscured our Kurdish identity because Kurdish identity was thought to be identical with the PKK. Recently we got away from this attitude thanks to the process. We see the pains of killed officers' families as our own pain. The most important thing for us is our country. We no longer face any discrimination because of our identity." Another story underlines the same point that being Kurdish does not mean being pro-PKK, and the HDP does not represent all Kurds. Another person said: "We have lost our relatives and we are aware of the plots that have been hatched. The pain of our masteries is in our heart. We know that some forces want to divide Turkey like Syria and Iraq. We are able to travel freely because the AK Party removed the emergency rule in the region. The violations are gone now. The AK Party is not responsible for what has been before. It sincerely put policies into effect to solve the Kurdish problem during their 13-year period in power."

Another story goes: "We were not able to listen to Kurdish music because if someone complained about you listening to Kurdish music you would have been put into jail. There were many unsolved murders. We would like to live together as Kurds and Turks. After the reconciliation process, the government tried to create a more secure and prosperous region by constructing airports and investing in infrastructure, but some people who don't want us to live together set fire to construction machines." Another participant said: "We are the victims of terror. The PKK forcibly kidnapped the daughter of my brother-in-law to the mountains where its camps are. The PKK killed my brother-in-law; he was killed during his military service. Our wedding ceremony turned into a funeral ceremony. I believe Turkish and Kurdish people are brothers and sisters. I believe that these terrorist attacks that are trying to divide us will not succeed."

* Council of Europe, The Congress of Local and Regional Authorities, Member of Turkey's National Delegation
Last Update: Oct 27, 2015 2:12 am