Understanding the southeast a moral duty 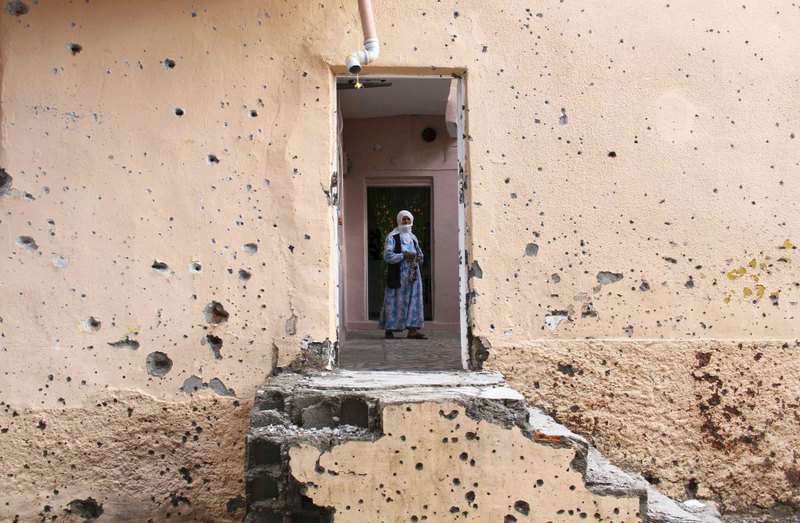 Everything the AK Party has done so far in terms of promoting Kurdish rights and ending the deep state's terror over them is the reason behind Kurds voting for the AK Party in the Nov. 1 elections

Cizre, a Kurdish town in the far southeast of Turkey, has once again recently been the focus of lots of coverage both by the national and international media. The town has a number of cultural and historical legacies that would normally pave the way for such recognition. For example, the classic Kurdish love story, "Mem and Zin" - a kind of Kurdish "Romeo and Juliet" - has glamourized the city with notions of love and what risks could be taken for love for centuries. Another unique aspect is that it is also home to the Noah's tomb. According to some resources, Cizre is the location of Thamanin, the town founded by Noah at the foot of Mount Judi where Noah's ark came to rest. As such, the town has been one of the noteworthy tourist attractions in southeastern Turkey. Regrettably, its recent reputation has unfortunately been in violation of the above legacies once again. Taking Noah's story as the starting point, Cizre's cultural and political histories have been long and rich. Therefore, it is a living library for understanding a majority of the Kurds and their resentment of the notion of the state. For this, there is no need to go back to Noah's time, but it would be sufficient to examine the policies imposed on Cizre and its neighboring villages throughout the 20th century with particular attention on the last quarter.

STATE WITHIN A STATE

Cizre's current demographic structure changed considerably in the 1990s with the oppressive policies of the fearsome deep state turning the town into a mini-metropolitan town. This progression was a forceful one due to Cizre's neighboring villages being evacuated by the deep state under the laws dictating state of emergency while the then governments turned a blind eye to such human rights violations. This practice unfortunately was not limited to Cizre, as the entire region suffered from arbitrary evacuations and significant human rights violations. As such, there was a big wave of unplanned, forced migration from villages to towns and big cities, which had devastating socio-economic difficulties for the victims but also, brought about problems of social integration.

This was and remains a turning point in cementing some very strong grievances against the notion of the state among displaced Kurds. Kurdish cultural rights, which have long been denied throughout the Republic's history, were first introduced and promoted when the Justice and Development Party (AK Party) came to power in 2002. One of the new government's first actions was to abolish the state of emergency shortly after coming into power, which had a massive relieving effect on the people. This was followed by recognizing a number of cultural rights.

Nevertheless, despite the recognition and promotion of Kurdish rights and culture by various AK Party governments, the party has struggled to attract the majority of Kurdish voters and the party's senior figures have been struggling to understand how to find a solution to this. After the June 7 elections in which the AK Party lost its Parliamentary majority for the first time alongside a considerable percentage of Kurdish votes, some people went as far as criticizing Kurds for having a lack of appreciation with respect to what the AK Party had done so far in terms of promoting Kurdish rights. Although not widely voiced, these critics in a way revealed a perception that was showing traces of an implausible mentality. For this perception viewed the long-denied recognition of cultural rights as a favor done to Kurds, whereas in any democracy recognition of rights is deemed a most basic tenet that everyone should enjoy. Leaving this debate aside, both the June 7 and Nov. 1 election results show that Kurdish voters need to be studied further and when doing this, the aforementioned turning point and its devastating trauma on the people of region, which is symbolized in the Cizre case in this piece, should be examined closely because the social and psychological implications of this turning point will reveal some crucial points in understanding the people of the region. While doing this, adapting an empathetic approach is fundamental and will continue to be so.

Imagine you are a farmer with a large extended family with lots of children and your entire livelihood depends on the farm, land or livestock that you have. One day, all of a sudden, you are instructed by the security forces to leave everything behind, your memories, farm, land, home and your village and move to another town or city where you have no family, no home and no financial means to meet your and your family's basic needs. And it is not only you, but all the residents of your village and those from dozens of other villages who are going through this in the region.

This has undoubtedly caused enormous trauma to the people of the region and they have been left to deal with this trauma on their own with no formal responsibility taken so far in this respect. To compound this trauma, imagine all these villages congregating in centers like Cizre. Imagine a father whose only work experience has been farming and who has no qualifications to survive in a city with an extended family of 10 children. Imagine a family that only manages to get by with what they have earned from their farm and their ordeal for surviving in a city where they have no farm, no land, no home, no animals, nothing. Imagine elderly people who have always lived a country life being dumped in a town with no provision of basic needs such as a home. Imagine these elderly people, most of whom only spoke Kurdish, being disconnected from their familiar rural environment and chucked into a city where Turkish is the main language and so the level of isolation and discomfort inflicted on the elderly increases even more.

How would you feel if you were going through this?

Would you feel hatred for being forced to a city where there is no roof above your head, no farm, no land, with nothing to get by?

What would your feelings be?

Helplessness, sadness, frustration, resentment, fury, anger, hatred, wanting revenge, you name it. The least you would probably want would be for the perpetrator to go through what they have forced you to go through.

For this reason, it is imperative that the ruling AK Party understand Cizre and the southeast in order to pave the way for initiating a trauma-healing process. It is essential that it understands the weight of stories that the above-mentioned displaced people brought up their children with, of stories of how beautiful their villages were and how they were forced out of them, stories of their memories and stories of their ancestors. Stories of how they came to Cizre and many other cities with no livelihoods, no shelter, simply nothing. And more importantly the perpetrator that mentioned in these stories is the Turkish state.

They will need to understand how this trauma will have been compounded after the above-mentioned youth who have already been through a lot and brought up with painful stories and who witnessed the shooting of civilians in 1990s in Cizre. Imagine how you would feel if you were one of these displaced Kurdish boys or girls, and on the top of all the above-mentioned trauma you are made to chant: "I am a Turk," the first phrase of the recently abolished national oath that every pupil had to chant regardless of their race or ethnicity every morning before starting class at school. Imagine the thoughts and emotions that would race through your mind after being forced to claim in a chant something that you in reality are not on top of all the unjust treatment that has been inflicted on you and your family - not to even mention the unresolved murders. Imagine the mental state that would put people in.

This is necessary to make people see that there is a government that acknowledges that their dignity, rights over their capitals - which is as important as one's dignity when it is key to their survival - homes, lands, farms, memories and so on were violated inhumanely and this has to be compensated for both in moral and material terms. In this way bridges can be possibly rebuilt and wounds can be treated. From a moral perspective, it is and will be unfair to expect the people of the region to heal all of their psychological trauma and open a new page. As we all know, however, physical scars heal quicker than psychological scars.

In this context, failing to understand Cizre and the southeast, its society and psychology will be one of the biggest mistakes that will occupy Turkey for a long time. Cizre contains enough traumas from the 1990s for ill-intentioned international circles to use it in a destructive way. Cizre contains enough sadness for being a symbol of a place that is full of people who have been displaced at the hand of the deep state and thus, in their own minds have the right to be opposed to and wary of state authority. The sorrow and trauma of the people of Cizre and the southeast is so innocent that exploiting this trauma for certain political aims would be the biggest offence to their losses and their trauma. More so, this exploitation causes further trauma, loss and sorrow, and sadly, there are too many towns that share similarities with Cizre in this respect. Even Istanbul is home to many forcefully displaced Kurds, not to mention Kurds living abroad.

The fact that all this trauma was inflicted by the deep state does not seem to make too much of a difference because for the people of the region the state is the state. Also, tackling policies of denial and addressing lack of investment in the region does not seem to be eradicating some of the old grievances and strong feelings, and as such, there is a need to tackle the psychological implications of the oppressive and inhumane policies of the past and help the people come to terms with their losses with some noteworthy solutions.Adapting a patronizing approach that looks down on the people of the region due to lack of appreciation in terms of electoral support for the AK Party would be an emotional and reactive approach rather than a rational one, and it will not benefit the people of the region or the country in the long-run. On the contrary, it will further validate the people's trauma and victimhood. To reiterate, in order to understand the hardened resentment against the notion of the state, this trauma needs to be well-examined and the necessary steps need to be taken to help the people move on.

Unfortunately and admittedly, this is yet another tragedy and mess caused by the old Turkey that new Turkey has to address in order for the country to move forward.