A sociological analysis of Turkey's elections 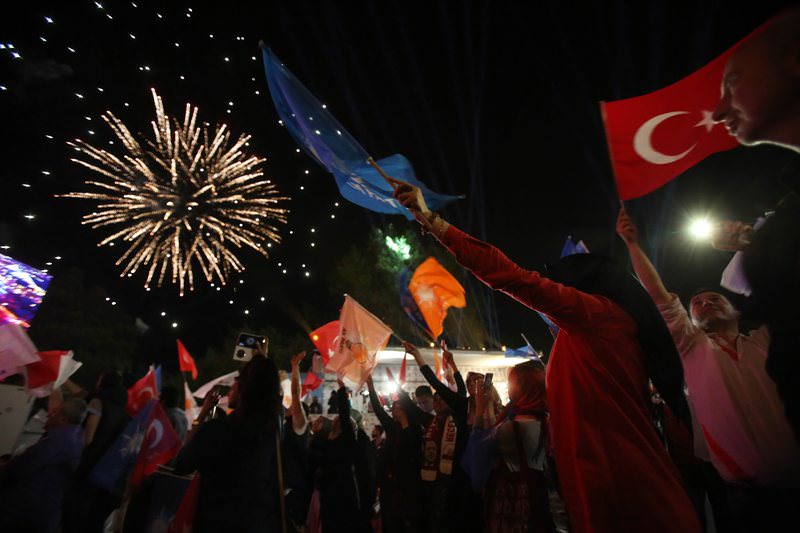 Instead of the MHP which interrupts the coalition talks after the June 7 elections, the CHP which does its politics from an ideological perspective and the HDP connected with the PKK, the electorates supported the AK Party in the Nov. 1 elections

All of the experts and polling firms are amazed with the Justice and Development Party's (AK Party) 49.48 percent vote share in the Nov. 1 elections, which brings it 317 seats in Parliament and establishes quite firmly that the AK Party is still the dominant force in Turkish politics. On the eve of the elections, everyone stayeJJd focused on the recent predictions from polling firms, but hardly any of them were able to predict that the AK Party was on the verge of a big victory. According to pre-election surveys, the AK Party was hovering just below a parliamentary majority, unable to reach the required amount. To make a long story short, the polling firms whiffed entirely, even those that were able to predict very close results for the June 7 elections failed to predict the real outcome. At this point, it is significant to ask what happened between June and November that caused the polling firms to be so off.

Since March 2013, the AK Party controlled a majority of seats in Parliament. After the party lost its majority in the June elections for the first time, Turkey suddenly encountered socio-economic instability and some major security problems. First of all, immediately after the cease-fire was suspended with the PKK, a renewed and sudden relapse of violence started in the decades-old conflict. The PKK attacks on Turkish troops in southeastern Turkey killed dozens of soldiers. Some experts called the upsurge of PKK violence a clear-cut upheaval against the Republic of Turkey, which imposed curfews in some parts of southeastern towns. There was something going on in the southeast, and nobody, especially the citizen's of western Turkey, could comprehend the exact dimension of it at all. Second of all, maybe it could be assumed that one of the key milestones in the emergence of the worsening security climate was the Islamic State of Iraq and al-Sham (ISIS) attacks. In October, two ISIS suicide bombers detonated themselves in Ankara and killed over 100 people and injured hundreds more. This attack was the largest terrorist attacks in the country's history, leading Prime Minister Ahmet Davutoğlu to declare three days of national mourning. Under the unstable circumstances that Turkey was going through, the AK Party argued that this new backdrop of rising socio-economic and political instability could only be fixed by returning it to sole control over Turkey's entire politics. That was a real challenge for the AK Party, especially after the result of the June election, but it was able to prove that the party is still in control over Turkey, both with successful military attacks on the PKK and a well-founded nationalist election campaign. Apart from the AK Party's well-directed and wise politics under the interim election government under Davutoğlu, the opposition parties failed to analyze the political behaviors of their voters in a crisis environment. Even though the long-held meetings and uncompromising attitudes in coalition talks after June 7 was attempted to be made out as an obstruction by the AK Party by the mainstream media, voters knew the one at fault in the failed coalition talks was the right-wing Nationalist Movement Party (MHP). The Republican People's Party (CHP) is the most stable main opposition party without any doubt, and it adopted a cooperative attitude throughout the coalition talks. The CHP succeeded in getting the most votes in just six provinces out of 81 across the country and was unable to significantly increase its votes on Nov. 1, even though the party ran its campaign on economic promises. The upsurge of PKK violence did not work out for the Peoples' Democratic Party (HDP) and its votes melted away along with those for the MHP, as some of their voters found the AK Party more appealing this time around. In the overall picture of the Nov. 1 elections, the AK Party succeeded to pick up seats both from the MHP and HDP.

The polling firms got caught in the riptide of the Nov. 1 elections and were unable to analyze what voters really wanted and where their main concerns were rooted in the current political landscape. In addition, they failed to assess the influence of various psychological, social and political factors on the determination of the vote. The results cannot be explained by predispositions dominated by party identification because the parties that are the constant supporters of identity politics were defeated. It could be analyzed that identities of opposition parties became crystallized in the Nov. 1 elections, in fact, voters from both the Turkish nationalist MHP and Kurdish nationalist HDP voted for the AK Party. Voters were looking for a party that is able to prove to be the main partner in solutions, and President Recep Tayyip Erdoğan's political instincts are capable of encompassing the electorate's main concerns of the lack of security and political stability. This is much more then a socio-psychological process that the polling firms were unable to analyze comprehensively to measure changes in individual voter intentions for Nov. 1. The AK Party used a military campaign in order to enhance Turkish nationalist credentials and emerged stronger in the elections because of it. Re-evolving a united, one-party government, the AK Party is on the verge of two significant bids. One is the suspended reconciliation process with the PKK that might be revitalized in the near future. The other is writing a new constitution and constitutional changes to expand presidential power to permanently dominate the Turkish political landscape. Erdoğan's AK Party raised the chances of making a constitutional amendment that would pave the way for a transition to a presidential system. The AK Party needs a super majority of 330 votes to change the Constitution, which means it is impossible to do it without support from one of the opposition parties. In the near future, after forming the Cabinet, these are the vital issues that will be discussed exhaustively in the new Parliament.