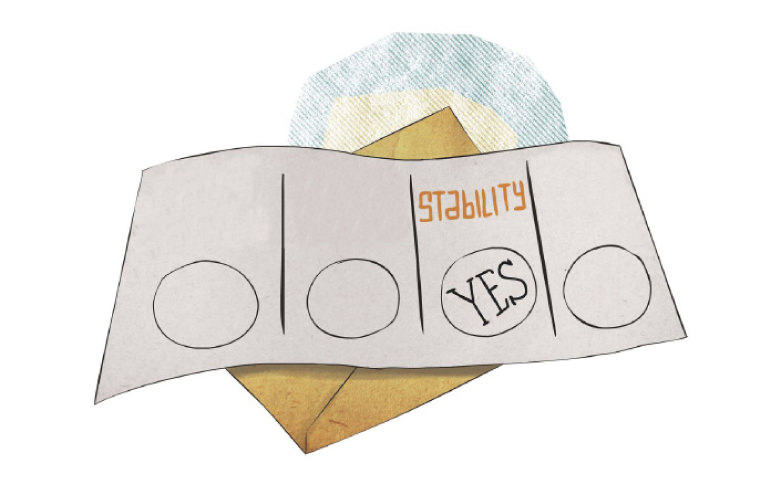 The result of the Nov. 1 elections is the proof of many voters' great concerns for political stability, economic growth, efforts for permanent peace and a resolution to the Kurdish question

Even though it was the first reelection in our political life, the result of the Nov. 1 elections took everyone, including the parties, by surprise. I find it strange that the result came as such a surprise to everyone, particularly those who remember the recent political past or study politics because there were distinct similarities between the voting behavior on Nov. 1 and Nov. 3, 2002. The similarity in the political and social atmosphere before both elections was a signal that gaining a majority in Parliament was possible. Before the Nov. 3, 2002 elections, there was a range of political and social issues that motivated people's voting patterns. The economic crisis of 2001, social depression because of deficient government policies, especially after the 1999 earthquake, a political crises due to disputes over the Constitution, the government losing legitimacy due to mafia-style acts like the Susurluk incident, and several other events that led to political and economic instability meant that a number of central right parties (ANAP, DYP, MHP) and a leftist party (DSP) failed to pass the 10 percent threshold. The electorate felt there were similar risks and dangers that needed addressing between June 7 and Nov. 1 and made the decision to punish those that were directly and indirectly responsible for economic instability and decreasing the political power and impact of the Nationalist Movement Party (MHP) and the Peoples' Democratic Party (HDP). We should emphasize that that what separated the 2002 and 2015 elections was that the HDP and the MHP did manage to cross the 10 percent threshold - if only by a hair's breadth -- notwithstanding being responsible for the instability that occurred before the Nov. 1 elections, a product of the social base of these two political parties. If one of these sociologically powerful parties was artificial, then it would have failed to pass the threshold, and the Justice and Development Party (AK Party) would probably have won more than 370 seats in Parliament rather than 317.

THE LEADING ACTOR IN LOCKING UP THE POLITICAL SYSTEM: NIHILIST MHP POLICIES

The MHP, which paid the price for the political and economic crises in 2001 by being unable to exceed the election threshold in the 2002 election, preferred to follow a nihilist policy instead of analyzing the risks and opportunities after the June 7 elections. However, the MHP did not see or did not want to see the opportunities of being a key actor after the June 7 period.

Likewise, the HDP's announcement to not join a coalition with the AK Party and the MHP's announcement to not support or participate in any kind of government gummed up the political system. Although the MHP has a similar social and political base to the AK Party, the party insisted on coalition redlines that it knew the AK Party wouldn't accept. There were only two possibilities that remained: First, a coalition between the AK Party and the Republican People's Party (CHP) - always an unlikely partnership considering their bases and rivalries. Second: Snap elections. The MHP has suffered since the beginning of the campaign season back in April from election fatigue as well as being indirectly responsible for the stagnation and the rising exchange rates that stoked increasing anger among households. Additionally, the re-launching of terrorist attacks by the PKK and the bombings by the Islamic State of Iraq and al-Sham (ISIS) in cities increased the necessity for public security and order. While society had ontological problems like these, the MHP's nihilist attitude and its refusing of every policy proposal ended up diminishing their votes by 30 percent.

Even though it wasn't as large an actor as the MHP, the HDP, which emerged after the June 7 election, became an indirect actor in the process. Society's most significant expectation from the HDP was that it legally establish peace with the Kurdish community by representing Kurdish civil policy in Parliament. The HDP not only won votes in Kurdish areas, but also gained the sympathy of many urbanites. But the PKK did not allow the HDP to take the role of leading the Kurds and started conflict anew. By contrast, instead of opposing the PKK, the HDP supported this process with the famous dissertation of Clausewitz of "war is not merely a political act but a real political instrument." That was Salafi policy for the HDP, but it was a basis policy for the BDP. The HDP took on the policy of attacking President Recep Tayyip Erdoğan - who had gained his position with 52 percent of the vote - and thus lost their legitimacy in the eyes of many. What really bankrupted the HDP was its support of the PKK occupation of Cizre just before the Nov. 1 election, and with this support policy, the HDP threw away the chance of becoming a Turkish political party and in the end only narrowly passed the election threshold.

To summarize, the results of these analyses, it would be fair to say that when the Turkish nation has to vote at a time of social and economic instability - like it did on Nov. 3, 2002 - the communities concern for peace and stability becomes the dominant factor in voting habits. Political surveys have already erred because they have been unable to understand the groundswell of opinion over the people's primary concerns. The people did not put the parties that locked up the political structure during the last five months in power. But as a reasonable and rational actor that was able to face up to the demands of society, the AK Party took its lessons from the June 7 elections and was put in power by the electorate with increased votes.