A conspiracy theory of global terrorism 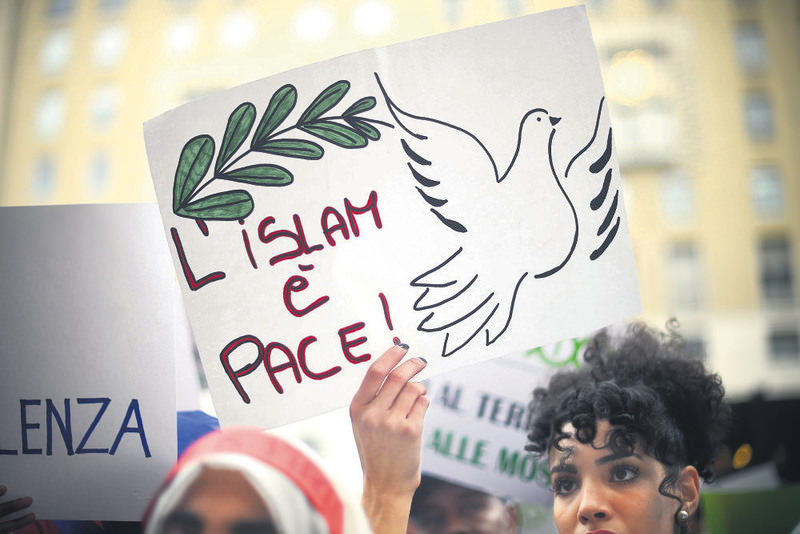 A woman shows a poster reading ,Islam is peace, during a demonstration of Muslims speaking out against terrorism.
by Sajid Mahmood Sajid Dec 05, 2015 12:00 am

The terrorism industry is a $1 billion enterprise now, one that was internationalized in the 21st century. Terrorism and militancy in the poor Islamic world in the name of Islamic jihad has established its identity as large, multinational entrepreneurs around the world, and a lot of traditional investors, are willing to invest - if not currently investing - in this emerging sector. Just like the World Bank, the International Monetary Fund (IMF), multinational corporations and the World Trade Organization (WTO), multinational terrorist corporations (MTCs) have allegedly been invented by the developed countries of the first world as a tool of exploitation for the poor Islamic third world. Moreover, the main objectives of MTCs are to keep the Islamic third world occupied with militancy, away from progress and dependent on the developed world. For their ex facie, MTCs exploit the philosophy of Islamic jihad as a theoretical tool and a safe umbrella, and it provides enough raison de etre and modus operandi for the bloodshed and killing of Muslims by Muslims and the killing of anyone by anyone anywhere in the world. But practically speaking, MTCs are not doing any "holy task" and they are not fighting a "holy, divine war." Indeed, these are working on the agenda of their imperialist and capitalist donors who have dominated world politics and the economy for decades. Dollars and pounds can easily hire the loyalty of anyone, anywhere and anytime, in this wonderful world.

The developed countries of the world initiated the entrepreneurial business innovation of the MTCs in the second half of the 20th century. Al-Qaida was the editio princeps MTC founded and funded by the U.S. to defeat the Soviet Union, and it did the job well. The U.S. and the big European powers are the major supporters and financiers of the MTCs in the 21st century. The basic purpose of MTCs is to maintain the status quo of poverty, illiteracy, political instability, underdevelopment and dependency on foreign debt in the Islamic third world. In this neo-colonial era of the 21st century, old colonial powers have kept the Islamic third world dependent for debt, arms and technology. In such a way, the developed world wants to preserve their long-term economic interests and prolong their dominance and supremacy over the poor Islamic third world at least until the end of the 21st century.

Al-Qaida, DAESH, Boko Haram in Nigeria, the Houthis in Yemen, Al-Shabaab in Somalia, Hezbollah in Lebanon, the Nusra Front in Syria, Egyptian Islamic Jihad, Tehreek-E-Taliban in Afghanistan, the Haqqani Network in Afghanistan, Tehreek -E-Taliban Pakistan (TTP), Libyan Islamic Fighting Group, Jamat-ud-Dawa in Pakistan and the Armed Islamic Group in Algeria are some major MTCs, and all these receive funding from many donors across the globe. Main common objectives of all these MTCs are to destroy the Muslim world through militancy and civil war, and position themselves to appear as if they are engaging in Islamic jihad in one way or another.

DAESH is the de novo addition to the privileged club of MTCs, as it is also the most recently established MTC. DAESH's main area of operation as well as its headquarters is in the Middle Eastern region, mainly in Syria and Iraq, but it has the capacity to conduct terrorism activities and engage in Islamic jihad all over the world. To save face, DAESH uses the tool of "Islamic Caliphate" and "Islamic Jihad" as an umbrella to operate in the region. Practically, however, it is allegedly working for either the imperialist or regional agenda of foreign donors like the U.S., France, the U.K., Israel, Saudi Arabia and Turkey. Like DAESH, al-Qaida and many other such terrorists groups have a similar story and backing of external parties.

A very interesting fact of the MTC sector is that you will never find a documented, declassified detail of their donors and founding fathers, and MTCs operate just like underworld organizations. Sometimes donors of MTCs pretend in media reports that they are fighting against MTCs; practically, however, donors usually do not fight against the recipients. In such a way, donors of MTCs throw dust into the eyes of the people across the globe.

In this narrative of MTCs, another fact is that they are all only operating in underdeveloped Muslim countries. Pakistan and Afghanistan in Asia, Libya, Nigeria, Somalia, Algeria and Egypt in Africa and Middle Eastern states have been or they are the recent victims and targets of all the aforementioned MTCs. A few questions arise regarding why MTCs are only operating in poor Muslim countries and why they do not engage in jihad in Europe or the U.S. When you try to find the answers, one discovers that these MTCs are basically hired terrorist franchises working for the agenda of donors, and these MTCs have nothing to do with the cause of Islam. Instead, these MTCs are simply using or misusing the name of Islam in order to legitimize their operations across the globe. In this way, the developed world is silently destroying the underdeveloped Islamic world by using Muslim guns.

At the end, I would like to look back on the events of the last century in search of the fons et origo of terrorism and militancy, as well as examine how it has evolved and was promoted in the past. After World War II, Israel came into being in May 1948. This historical event created sentiments of hate among Palestinian and other Muslims around the world. Palestinian Islamic Jihad (PIJ) was founded in 1979, and they began fighting Israel in one way or another. So, this inception and existence of Israel motivated the Islamic world, and Muslims began resorting to Islamic jihad, which was the starting point of religious extremism among Muslims as well. During the 1980s, the U.S. hijacked and directed this Islamic jihad toward the Soviet Union, and the U.S. founded al-Qaida, which undertook the Afghan jihad in coordination with Pakistan, leading to the defeat of the Soviet Union. During the 1990s, the U.S. started to redirect this Islamic jihad toward Muslim countries, and this practice and strategy is currently operational and still working for the U.S. and European powers.Now in the 21st century, Muslims are destroying the Islamic world by themselves in the name of Islamic jihad, and MTCs are playing a key role in this "holy destruction" while donors and financiers of MTCs are cherishing their offices and palaces while silently watching this pre-coded drama. So, in this game of global terrorism, developed countries are the victor ludorum and the poor Islamic third world is victus. This is my conspiracy theory of global terrorism.