Saudi's problem with a rogue dictator in Cairo 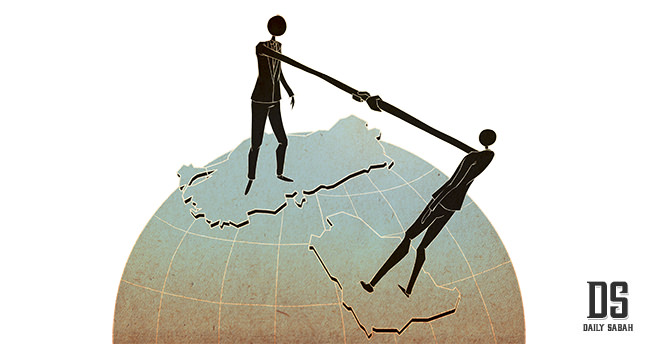 After ending their relationship with el-Sissi, who caused further turmoil in the already tumultuous region, the Saudis are willing to open a new era in relations with Turkey

After orchestrating the 2013 coup that ousted Egypt's first democratically elected president, Mohammed Morsi, and fully backing Field Marshal Abdel-Fattah el-Sissi's power grab, Saudi Arabia has come to realize that Egypt under el-Sissi has been worse than the Hosni Mubarak era. The deteriorating situation in Egypt must be viewed with alarm in the Gulf region.

Saudi Arabia, the United Arab Emirates and Kuwait have poured billions of dollars into Egypt to help the Egyptian economy under el-Sissi. But the despot in Cairo has miserably failed to deliver on all fronts -- the economy, security, diplomacy, and law and order -- despite the military-led crackdown on all forms of opposition and peaceful activism.

After waiting for two-and-a-half years, the Saudis are now getting frustrated with el-Sissi. They are looking for a change in Egypt, but they have not been able to come up with a formula that can be acceptable to the powerful military and the Muslim Brotherhood, which retains popular support among the country's masses.

On the other hand, the Saudis are well aware that any arm-twisting of el-Sissi will be a gift to Russian President Vladimir Putin and Iran's clerical regime. A cornered el-Sissi may become more rouge and easily switch his allegiance to the Kremlin and Tehran, and that would be a big nightmare for Riyadh and indeed for the entire region facing Russian and Iranian expansionist dangers.

Putin is more than willing to use el-Sissi in his Soviet-style expansionist schemes in the Mediterranean region and the Arab world, especially at a time when the Russian strongman is directly challenging President Recep Tayyip Erdogan and sees Turkey as a major hindrance to his plans of taking control of Syria. Having lost his grip on most of Syria, Assad is only too grateful for any outside support as long as it keeps him and the remnants of his regime safe in the capital.

With the great plunge in oil prices and sluggish demand in major economies, Saudi Arabia's finances are shrinking at a rapid pace and the 2016 budget deficit is projected to be a mammoth $98 billion. Thus, the Saudis may not find themselves in a position to further transfer billions of unaccounted dollars to el-Sissi's treasury, which is plagued with widespread corruption and unproductive Egyptian administration.

On the domestic front, people are fed up with el-Sissi's tall promises and dismal performance. Egypt's economic performance under him has been the worst-case scenario. Life has become difficult for tens of millions of Egyptians. The prices of essential commodities are skyrocketing, the youth unemployment rate is at an all-time high, and the tourism industry is slowly dying. The security situation has also worsened. As it used to be under Mubarak, Egypt's small elite is getting richer and the vast poor population is getting poorer. In el-Sissi's Egypt, security is left to militants' mercy and any thought of prosperity has become a distant dream.

El-Sissi in Cairo and Assad in Damascus are the only two old-guard dictatorial regimes left in the Middle East. It is obvious that el-Sissi has a positive view of Assad's authoritarian rule even if this brings the Cairo dictator in confrontation with his Gulf benefactors. Amusingly, the coup regime in Egypt voiced open support for the Russian military intervention in Syria, making a mockery of the Saudi policy. Indeed, the Gulf monarchies must not take el-Sissi's dangerous policy shift lightly. In his desperation and under Russian manipulation, el-Sissi is capable of causing further turmoil in the already tumultuous region.

Though Egypt has sent military reinforcements to Yemen to fight against the Houthis and supporters of ousted president Ali Abdallah Saleh, it seems Egypt is an unwilling partner of the Saudi-led Arab coalition. Saudis have no better options to fight the joint Houthi-Saleh combination than the Yemeni affiliate of the Brotherhood, Al Islah, but the Egyptian dictator abhors them. In this sense, he is one of those irrational leaders in the region who suffer from silly egos, unable to see what serves the long-term interests of the region in view of the very real Russian and Iranian dangers.

Turkey hasn't had ambassadorial level diplomatic relations with Egypt since the el-Sissi coup. The Turkish leadership has been exceptionally critical of el-Sissi's brutalities and atrocities, demanding a return to legitimacy and the restoration of democracy in Cairo.

Saudi-Turkish ties have improved a lot since King Salman came to power after the death of his predecessor King Abdullah in January last year. During Erdoğan's December 29-30 visit to Saudi Arabia, both countries agreed to form a high strategic council to further strengthen relations. The growing Saudi-Turkish bilateral relationship does not bring good news for Sissi if he is bent on harming Arab interests by allying with the region's shameless enemies - Russia and Iran.

In the wake of the Russian military intervention in Syria and growing hostility between Russia and Turkey after the warplane downing incident, the Turks and the Saudis need each other much more than before. During President Erdoğan's visit Turkey and Saudi Arabia also reached an agreement on the establishment of a high-level strategic cooperation council to strengthen military, economic and investment cooperation between the two countries. Their warming of relations indeed works not only in bilateral interests, but serves wider regional interests, political stability and multilateral cooperation.

Thus, in the wake of emerging developments from Yemen to Syria and from Iraq to Libya, threats from DAESH and growing Iranian penetration in Arab lands, the Saudis need the Brotherhood to effectively counter these challenges. Saudis see the Brotherhood as the only organization with the political experience, organizational cohesiveness and transnational influence to serve the need for a moderate, Sunni counterweight to counter threats from Iran, which sees itself as an "export-quality revolution" rather than a normal country. The Saudi leadership knows that they have to align with the legitimate, credible transnational movement of people that can help to restrict the power of rising sectarianism and meet head-on with the DAESH ideology in the restive region. There is no alternative to the committed socio-political movement of the Muslim Brotherhood in the region. For that, the Saudis will have to take some affirmative action in Egypt, the birthplace of the Muslim Brotherhood. And it is clear that the Egyptian military dictator is an unreliable and unpopular man to serve these vital Saudi interests.

Saudi Arabia is in a big dilemma. They have so far not been able to evolve a pragmatic modus operandi to manage their protégé el-Sissi in the emerging challenges in the region. The Saudis know that it is very difficult to persuade someone like el-Sissi to make the concessions that will ultimately force him out of power. On the other hand, the Brotherhood appears to be determined not to compromise on anything less than the restoration of full democracy.