Saudi-Iranian conflict: Not sectarian, but identity 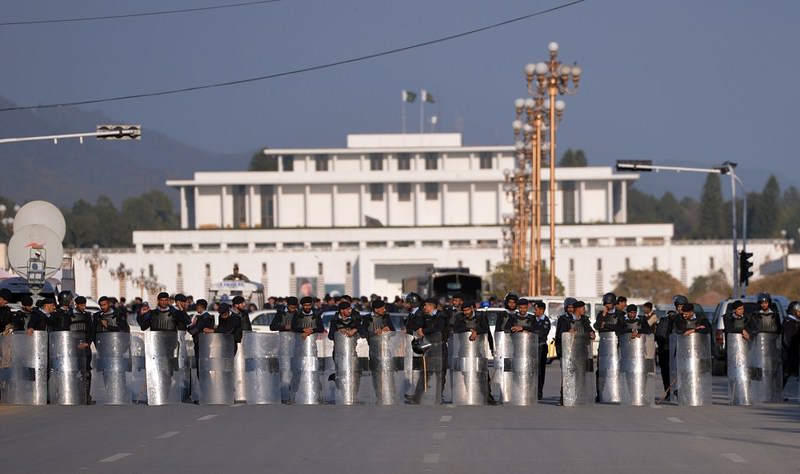 Pakistani riot police block a street leading to the President House during a protest by Shiite Muslims in Islamabad against the Pakistani government's decision to join a Saudi-led military coalition.
by Merve Çalhan Jan 16, 2016 12:00 am

The conflict between Saudi Arabia and Iran stems not from a sectarian-religious perspective, but results from the current process of state-dictated identity formation in the Middle East

The execution of prominent Shiite cleric Sheikh Nimr al-Nimr in Saudi Arabia has revived the question of whether there is notable sectarian violence bubbling up in the Middle East other than as a result of the ongoing turmoil in the wake of the Arab Spring. While some academics and political pundits argued that the execution of the cleric unearthed long-standing but hidden Sunni-Shiite sectarianism in the region, some others say that it was a rather artificial religious division, and the Iran-Saudi Arabia rivalry is behind the scene. Even though the absence of any agreed upon views enables an obvious explanation of what is really going on, the one thing is pretty sure is that the repercussions of Nimr's execution deteriorated the delicate balance of geopolitics between Iran and Saudi Arabia on the regional scale. Owing by and large to the quest for a new comprehension of conflicts spreading throughout the Middle East, identity politics could be an initial starting point to get an idea of the recent developments in the region.

Following the outraged protests and overrunning of the Saudi Embassy in Tehran, Saudi Arabia cut ties with Iran and removed its diplomats as retaliation for the assault on its embassy. Until the Shiite cleric's execution, the heated proxy war between Iran and Saudi Arabia was developing in Yemen and Syria, so Nimr's execution might be deemed as both countries facing a direct challenge to not abandon the language of diplomacy since Saddam Hussein was toppled in 2003. The point is that Saudi Arabia and Iran have been engaged in proxy wars at various levels for many years, but this could possibly be seen as the first time both countries are proactive in the post-Cold War era, slugging it out with so called sectarian violence over Yemen and Syria. It is clear that both Iran and Saudi Arabia are willing to hold a delicate balance of escalating violence in order to mobilize support of Sunni and Shiite dissents in the Middle East. Whether it was an intentional escalation by Saudis or Iranians, the region is at a critical juncture and it is hard to predict how its newly shaped direction and flourishing character will evolve. Based on a maximalist explanation, the region will adjust to a new phase of the power struggle between Iran and Saudi Arabia based on identity stratification shaped by their governments as part of state-led social engineering projects.

As Bernard Lewis underlined in "The Multiple Identities of the Middle East," the region is formed by "old and deep rooted identities" based on neither nationality nor descent, but religion, or more precisely membership in a specific religious community, is the ultimate determinant of identity, but in the Middle East, the above-mentioned description of identity formation can only explain primordial characteristic of the Sunni-Shiite conflict, and fails to reach clues needed to adequately address the contemporary conflicts embedded in the region. Identities are demarcated naturally by blood from the family to clan to tribe, developing into an ethnic nation; location as a village, neighborhood, province or city, and religious community of sect or denomination. Nevertheless, the natural identity of birth and the compulsory identity the state imposes are those that might only be acquired in the Middle East.

In order to shed light on the reasons for the Saudi Arabia-Iran conflict one must look at the 1980s when the longstanding conflict occurred between Iran and Iraq. When Saddam Hussein was still in the power, he was holding a position of balancer in the region. Nevertheless, when the U.S. toppled him, the absence of a prominent balancing figure caused an authority vacancy in which both Saudi Arabia and Iran were able to compete with each other using sectarian interests as an instrument to re-foment identity politics in the region. Iran was able to manage its sectarian trump and acted as the sole protector of Shiite populations in the Middle East. The most visible sign of emerging Iranian influence in the Arab world is Iraq where Sunni and Shiite communities identify their locations as Sunni or Shiite neighborhoods separately. It is possible to see that today Iraq is the one of the most significant countries serving as one of the main branches of as "Shiite Crescent."

According to the Saudi government, the relevant dominance of Shiism was shaped by the Iranian government, which aims at exporting the Iranian revolution. The aim crystallized when the Syrian turmoil began in early 2011 and, more specifically, by the time the conflict was transformed to a Saudi Arabia and Iran rivalry that came to a boiling point with the assistance of sub-state actors such as the Quds Force - the extraterritorial element of Iran's Revolutionary Guard - Iran-backed Abo al-Fadl al-Abbas Brigade, al-Imam al-Hossein Brigade and Hezbollah al-Nujaba. While Saudi Arabia mobilized the support of Sunni jihadist groups against the Syria regime, Iran mobilized Hezbollah and Iraqi Shiite militias around Shiite ideology to support the regime of Syrian President Bashar Assad. The rapid growth of Iran-backed Shiite militias polished the separatist Sunni-Shiite identity politics in the region factitiously.

NEITHER MIDDLE NOR EAST

Currently, launching military operations in Yemen in late March in the name of security, Saudi Arabia took up another challenge to consolidate its leadership of a reconstituted Sunni regional order to reinstate former Yemeni President Abd Rabbuh Mansur Hadi. The top priority of Saudi Arabia to reshape a new identical order that would strangle Shiite Houthi rebels' insurgency, isolating Iranian influence, which stretches from the Mediterranean Sea to the Gulf of Aden against Saudi-backed government troops.

The entire above-mentioned political maneuver indicates that an artificial way of state-controlled identity formation in the Middle East is still at the forefront. Newly burgeoning identities from the Arab Spring era are fraught with serious handicaps due to categorizing people not as democratic citizens, but rather as members of ethno-sectarian enclaves to a large extent. Therefore, identity formation processes might be articulated as a delicate, state-backed and artificial process in the Middle East. Unprecedented turmoil could neither be explained by a puritan Sunni-Shiite sectarian rivalry nor solely by geopolitics, as the one who is able to govern identity politics, consolidates power and fulfills its mandate in the Middle East. Conflict between Saudi Arabia and Iran is not really about religion, but is rather it is driven by a cold war struggle between Iran and Saudi Arabia. In the general perspective of the Saudi-Iranian conflict, Iran claims to represent the world's Shiites and Saudi Arabia claims to represent its Sunnis, but the power struggle progresses over the formation and orientation of identity politics in a veiled manner. In order to make sense of the concrete meaning of the big picture in the region, analyzing identity politics should be one of the most important issues, which is worth discussing in depth.