A socio-historical analysis of polarization in Turkish politics 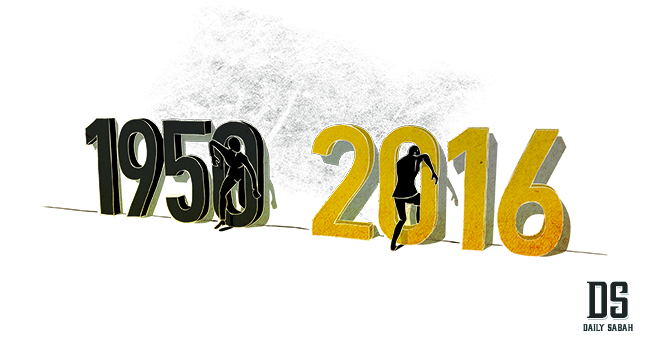 Polarization in Turkish politics is embedded through military interventions, the topdown institutional structure, the rising of identity politics and the disappearance of political centers

Prime Minister Ahmet Davutoğlu called for a new Turkey during his balcony speech to celebrate his Justice and Development Party (AK Party) winning a parliamentary majority in the Nov. 1 snap election. "Let's work together toward a Turkey where conflict, tension and polarization are non-existent," he said. Following the twin suicide bombing outside the main train station in Ankara on Oct. 10, 2015, the Financial Times reported that Turkish politics needs to return to accountability and end the polarization that opens it up to provocateurs. "If not, this pivotal NATO ally and EU candidate member could really become ungovernable," it said. According to a survey conducted in 2014 by the Wise Men Center for Strategic Studies (BİLGESAM) think tank, the ethnic, political and religious polarization in Turkish society has been increasing. "[D]omestic polarization has brought us to the point of hostilities. If the international and regional environment sees you as an enemy and if polarization leads to different groups seeing each other as enemies domestically, then you cannot escape becoming the target of terror acts," BİLGESAM head Atilla Sandıklı, said in an interview with Hürriyet Daily News.

The term polarization has become one of the much debated themes and center of Turkish politics and experience of democracy. From a socio-historical view, the increasing debates of polarization in Turkish politics in recent years must be discussed along with the experiments of the dominant party regime in the 1950s, governmental changeover in the 1960s through military intervention and then the rise of radical ideologies in the 1970s.

During the first decade of multiparty politics from 1950 to 1960, beginning with the transition to democracy in the late 1940s and the transfer of power from the Republican People's Party (CHP) to the newly formed Democrat Party (DP) in the general elections held in 1950, the DP remained in power with majority party governments and won the next two elections. In the following decade, Turkish politics along with its young democracy saw pressure of rising polarization between the DP government and the CHP opposition. From the 1950s to the 1960s, the rise of new elites from agrarian to entrepreneurial groups with its own political values and the clash between bureaucratic-founder elites and those taking their place was a watershed in Turkish politics. Thus, a broader analysis of the 1960 military intervention is meaningful in understanding the political transformation of Turkish political life from then until the current day. The 1960 military coup should be regarded as a response by the official and military elites to the decline of their power, status and prestige.

One of the most crucial aspects in the post-1960 period was that the 1961 constitution, with its more liberal characteristics, triggered a rise of various political ideologies influencing the military, bureaucrats and intellectuals along with university students. The birth of leftist terrorist organizations and political violence in the early 1970s was directly affected as a result of revolutionary ideologies. In other words, the 1970s were years of crisis including the increasing ideological polarization in party politics because of short-lived coalition and military governments accompanied with the economic crisis and lack of reconciliation between the two major center parties to adopt a unified political stance against terrorism and violence. With such a fragile democracy, Turkey's experience with democracy was once more interrupted with a military coup in 1980. There was then the beginning of a period of strict control over all kinds of organizations, foundations and other groups. Following the 1980 military intervention, the new period saw the emergence of Kurds, Alevis and Islamists as political actors.

During the period from 1990 to 2002, the new actors present amid the high level of polarization in Turkish politics and society were secularists and Islamists. This atmosphere of polarization became a catalyst behind the rise and electoral successes of the Islamist Welfare Party (RP) under the leadership of Erbakan in the 1994 and 1995 local and national elections. This kind of polarization between secular and Islamist and conservatives has continued to remain a strong pillar behind the relationship and tension between the two main center parties currently, the AK Party and CHP.

DEBATES ON POLARIZATION IN THE U.S.

Political polarization has also acquired considerable scholarly attention among Western academics and political scientists, especially in the United States. Some observers argue that political polarization and its influence on voters is more likely to benefit extremist parties when partisanship is weak among the populace. In other words, when partisanship between center parties is high, then a polarized electorate will turn to support mainstream political parties rather than the extremist ones. In the case an electorate is polarized but the level of partisanship and attachment to the mainstream political parties decreases, then extremist parties will ultimately get more support.

A simple dictionary definition for polarization emphasizes the simultaneous existence of opposing or conflicting principles and clashing tendencies or views. Polarization can take several forms, according to an occasional paper by the RAND Corporation on polarized politics in the U.S.. For instance, it can manifest as a bimodal distribution of ideologies, rather than as a left-to-right continuum, or as the decline of deliberation between people on opposite sides. One of the apparent aspects of the U.S.'s current polarization is that strong and distinct parties are presenting clear options to voters. Fifty years ago, the two political parties in the United States had been criticized for being too similar. Today's polarized parties, however, tend to offer different platform and messages that voters can distinguish more easily. As a negative point of polarization, gridlock in the legislative body, the inability of government to pass legislation, undermines and blocks political stability. Francis Fukuyama, a prominent political scientist, calls this new situation as a "vetocracy."

The 2002 elections opened up a new page in the history of the Turkish political life and party system. The AK Party won an absolute majority in Parliament and established a single-party government. The AK Party has repeated this success in the subsequent parliamentary elections with increasing percentage of votes. It, therefore, appears to be the predominant party, which is once again marking a transformation in the Turkish party system. This trend obviously indicates a new phase toward a predominant party system in which both one center party and one opposition party are the main actors in politics. This is actually a traditional system adopted by the United States with its residential system and Britain with its parliamentary system. In Turkey's case, the dominant party system in the 1950s was transformed through the increasing social and ideological diversity in Turkish society and military interventions. The 1960 military intervention closed the DP and the military regime banned all political parties.Turkey's institutional structure working toward the consolidation of democracy is still under construction. The debates in our society in the recent years cannot be understood and contextualized without understanding the country's experience with democracy. The issue of polarization should to be analyzed through the socio-historical experiences and institutional realities of Turkish politics. To understand the debate on polarization in Turkish politics, it is necessary to focus on the social, political and ideological dynamics that shaped the 1950s and 1960s through a change in the party system from the dominant to multi-party regime, and then the 1970s through the rise of radical leftist ideologies and social movements. It is fair to say that the matter of polarization in Turkish politics is not only a contemporary issue, as it refers to an embedded aspect in Turkish political life through military interventions, top-down institutional arrangements, the rising of identity politics and the disappearance of political centers.