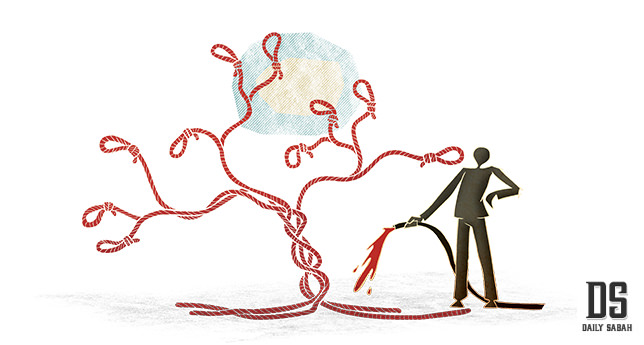 Iran, having notoriety for executing a record number of people who are ethnic and religious minorities, simply because of their opposition to Iran, tried to take advantage of Saudi Arabia's execution as a propaganda tool to strengthen its position in the Middle East

On Jan. 2, Saudi Arabia executed more than 40 Sunnis linked with al-Qaida and a few Shiites involved in rebellion against the kingdom. Prominent among them were Shiite cleric Nimr al-Nimr and al Qaida ideologue Faris al-Shuwaili al-Zahrani.

There are many countries that have completely abolished the death penalty and some places where death sentences are given only in the rarest of rare cases, clearly distinguishing between political prisoners and criminals. Iran is known for record executions of both criminals and political opponents. The issue of Iran's disproportionate reaction to Nimr's execution is highly crucial. How can Iran, the highest per capita executioner in the world and a country with a terrible record of executions of people belonging to ethnic and religious minorities, turn an execution in Saudi Arabia into a major political issue? Perhaps it is because the Iranian regime knows how to manage propaganda tools.

Execution of political prisoners by Saudi Arabia or any other country is highly condemnable. But for Iran, a notorious executioner of hundreds of political prisoners on bogus charges like "moharabeh" (waging war against God), to lecture others on executions requires extraordinary audacity. Obviously, Iranian hypocrisy knows no bounds.

Nimr had called for the overthrow of the al-Saud regime in his speeches when he lived there. How would Iran have reacted if an Iranian Sunni cleric had made such statements against the clerical regime in Tehran? History shows the Iranian regime has reacted with extreme brutality even against soft criticism by political activists. The regime's operators are scary and secretive.

Saudi Arabia may be a traditional authoritarian country, but in many ways it is more open to the outside world than Iran. Though Nimr must have known he was inviting trouble by speaking out against the Saudi government, what must be kept in mind is that he was executed not because he was a Shiite cleric, but because he was seen as a significant threat to the country's regime.

After the report of Nimr's execution was made public, the Iranian leadership started, as usual, reacting disproportionately. Iranian loudspeakers started their usual threatening calls from the top. The country's de facto ruler Ayatollah Ali Khamenei, spoke of "divine vengeance," President Hassan Rouhani said that cutting ties cannot cover Saudi Arabia's "big crime." Lebanese militant Hezbollah Secretary-General Hassan Nasrallah gave a televised speech in which he went so far as to describe Saudi Arabia as an illegitimate state and said that Nimr's execution "will not pass." There are numerous indications that the Iranian government instigated and enabled the attack on the Saudi missions in Tehran and Mashhad.

In the wake of the unfortunate execution and subsequent ransacking of the Saudi missions in Iran, Saudi Arabia severed diplomatic ties with the country, and many others in the region supported the kingdom's stand by following suit. Five out of six Gulf Cooperation Council (GCC) countries have recalled their ambassadors or downgraded diplomatic relations with Iran. Sudan, Djibouti and Somalia also severed diplomatic ties with the country and there is an unspoken understanding within the Organization of Islamic Cooperation (OIC) that Iran should not be allowed to create instability in other countries. It appears foreign countries understand Iran's fanaticism, which forms the basis of the state.

Saudi Arabia also got firm political support notably from Turkey, where President Recep Tayyip Erdoğan called the execution a domestic legal matter and further said the attacks on Saudi Embassies in Iran and Iraq were unacceptable.

Even Pakistan, which mostly remains neutral in Saudi-Iran brawls, deplored the attack on the Saudi missions in Iran. Islamabad reminded Tehran that it is the responsibility of states to provide full safety and security to all diplomatic missions and their personnel.

The repercussion of this diplomatic spat will further aggravate sectarian division in the region. Saudi Arabia and Iran do not fight direct wars; they fight proxy wars in someone else's land and with someone else's blood. Those most likely to suffer as a result of Saudi Arabia's execution of Nimr are Syrian, Yemeni, Iraqi and Lebanese civilians, as the proxy wars will intensify and the fate of political prisoners in the respective countries will worsen. Saudi Arabia is rallying other Arab countries against Iran's expansionism in the region as there is much concern about Iranian control of Iraq.

Iran has been the darling of Russia and, now, China. Nations build bilateral relations based on their political, economic and strategic interests, and Iran did all this after the Western sanctions on its economy were lifted. But sanctions or no sanctions, Iran's ruling establishment continues to be resolutely sectarian, racial and brutal while killing its political opponents with impunity.

Iran's staggering toll of executions paints an ominous picture of the state machinery carrying out premeditated, judicially sanctioned assassinations on a mass scale.

Nimr had called for an end to the Saudi monarchy in the Arabian Peninsula. Significantly, he also called for standing against tyrants, regardless of their sect, and he named Syrian President Bashar Assad as a tyrant and oppressor alongside Bahrain's rulers.

Iran tried to take advantage of the execution, but it's totally crazy reaction backfired, and now more countries have become alarmed by Iran's destabilizing influence in the Middle East. Iran needs to behave like a normal state and stop behaving as the sole guardian and protector of all Shiites around the world. It has to realize that it has already milked the revolution cow to the maximum, and that this product is no longer an exportable commodity. The first Supreme Leader Ruhollah Khomeini's ideology is still used to befool some Iranians while serving its vested political agenda.

Although Iran created a ruckus after Nimr's execution, it has never followed the deceased cleric's advice on Assad. Now the best tribute Iran can pay Nimr would be to withdraw the Iranian militias fighting with the Russian and Syrian regime forces. Iran is certainly in a position to do so in its own interests and in the interest of regional stability.