Is Islam the root cause of radicalized European youth? 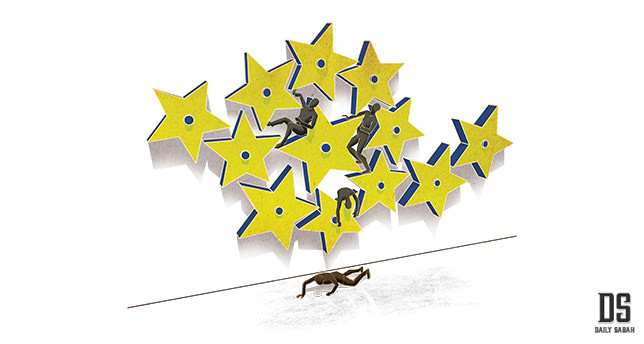 While blaming Muslims, the real victims suffering most from the extremism in the Middle East, of radicalization, European countries are avoiding self-criticism with regard to whether their failure of policies in social, economic and cultural integration of immigrants may be the real reason behind this radicalization

The unsustainable policies and governments of Iraq and Afghanistan formed after the U.S. invasions following 9/11 led the two countries to become failed states, making them a hotbed for the emergence of terrorist groups such as DAESH. Meanwhile, the political turmoil that began in Syria during the Arab Spring and the subsequent events in the Middle East enabled the perhaps containable DAESH to move its conflict beyond Iraq and Syria and convert its terrorist activities into a global phenomenon. In the past couple of years alone, the group has carried out tragic attacks on civilians in many cities such as the recent attacks in Ankara, Istanbul, Paris, Tunis, Beirut and San Bernardino.

The rise of global terrorism as a phenomenon has fanned the flames of the hotly debated topic of the radicalization of youth in the Western world, as DAESH has been able to recruit more than 5,000 foreign fighters to join its lines in Syria and Iraq from the West alone. While the concept of foreign fighters is not new, the recent rise in scale is certainly not old. Such a new phenomenon requires a thorough analysis of the roots of radicalization and the push/pull factors motivating Western youth to join the DAESH extremist group.

Of course, since the DAESH terrorist group claims to be carrying out its activities on behalf of Islam, the first approach to such an analysis blames the religion itself, accusing a religion of peace that is followed by nearly 2 billion people of being the reason behind the radicalization of Western youth. The concept of martyrdom in Islam has been put forward, suggesting that Muslim youth are attracted to DAESH due to its claims of being an Islamic state and utilizing the promises of martyrdom. More specifically, the Salafi ideology, which offers a literal reading of Islamic teachings, has been at the core of the blame. While there are components of Salafi ideology that might have perpetuated extremism in the name of Islam, an argument that accuses a religion as a whole of being the reason behind the activities of a terrorist group is not sustainable and does not go beyond constructing an Islamophobic platform.

Moreover, such analyses are attempts to re-construct an orientalist ideology that used to portray Muslims as camel riding badawis into an Islamophobia that now portrays Muslims as long-bearded suicide bombers. In addition, it has also helped the creation of the new "other" in the post-Cold War era and the subsequent post-9/11 world. The construction of a new other also feeds identity-based arguments that suggest that extremism is inherently part of ethnic groups of radicalized youth, be it Middle Eastern or North African. Moreover, it could be argued that the creation of another, as the new threat, is perhaps a way to maintain the status of the privileged over the less privileged.

However, such analyses fail to recognize the significance of the failure of European states' policies in the social, economic and cultural integration of immigrant youth, despite being first or second generation. Alternatively, it can be argued that the creation and maintenance of a new form of immigrant-based European ghetto or the "banlieues" in France in the late 1970s has led to the emergence of a generation of socially and economically marginalized European youth who have been an attractive target for DAESH recruiters. More importantly, the actors, or the factors, behind the creation of a marginalized class failed to estimate the danger of radicalization, ultimately turning it into violence through terrorist activities in its own territories.

Compared to Europe's other immigrant communities, Muslim minorities, which were part of the post-war reconstruction of Europe from the 1950s to the 1970s, have traditionally constituted the continent's less privileged economic class, particularly due to white supremacy and the maintenance of the European as an ideology. Despite a small amount of successful and influential Muslims, the Muslim community as a whole has struggled to come out of the ideological borders drawn around it by the discriminative fabric around them. One of the main indicators of such exclusion is unemployment among immigrants in Europe. For example, in 2013 the unemployment rate for non-immigrant citizens of France was 9.7 percent while the unemployment rate for the country's immigrants was twice that much, at about 17.3 percent, according to France's national statistics agency. According to a report prepared by the Pew Research Center, about 7.5 percent of the country's population has a Muslim background, without indicating the degrees of religiosity.

It has also been a problem of second- or even third-generation Muslims born in the ghettos to move out of such economic perimeters, leading to an emergence of socially frustrated youth and, perhaps, a class that is vulnerable to extremist groups that can exploit their condition for their terrorist ideology and activities. Aside from the recent phenomena of global terrorism and radicalization, the symptoms of such dysfunction were also exposed through the 2005 riots in the French suburbs as a result of youth unemployment and lack of opportunities in its banlieue communities, and the 2007 riots in Val-d'Oise for alleged police discrimination against foreigners as a whole and anger about xenophobia.

As such, although radicalization has taken a new form with the recent phenomena of global terrorism, the root causes behind social and economic frustration remain constant. With a new form of radicalization and blaming of Islam, in a way, the diagnosis of the problem has not been accurate and the failure in diagnosis has led to the creation of other problems without solving the existing ones. It is of crucial importance to point out that the proportion of radicalized Muslims to Europe's Muslim community of 15 million to 20 million who struggle to integrate into society despite discriminatory policies and the rise of right-wing politics is significantly small. It is no secret that Muslims have been discriminated against, solely for having Muslim-sounding names, despite having absolutely no knowledge of their levels of religiosity. What is even more striking is that even non-Muslim immigrants, i.e., people of color or those who just happen to have beards, have faced discrimination for looking like Muslims.

In other words, for integration to be successful, it must proceed as a dual process. While migrants embrace the new social mosaic and become active agents in society as a whole, the hosting state must accept these communities as equal citizens whose agency will not be discriminated against vis-a-vis the natives of the receiving countries.

Needless to say, extremism, such as that of DAESH terrorist activities, is not approved of by a majority of European Muslims or by the nearly 2 billion Muslims around the world who denounces violence. In fact, it is Muslims who are suffering the most from such extremism both at home in the Middle East and in the West. This is why arguments that blame the religion for radicalization are not sustainable or credible if they fail to recognize the root causes of European Muslim youth's disconnect from their first-world lifestyles and society who join the lines of a group with a barbaric ideology that is based on all things corrupt, but religion.

Although radicalized Muslim youth in Europe are a small part of Europe's Muslim community, it is still an important and crucial problem that needs to be tackled, as its danger and terrorist activities are incongruent to its size and scale. Affirmative action programs are necessary to tackle economic problems, such as unemployment, and education and integration programs to curb social problems will help society as a whole to fight those who exploit the vulnerability of the systematically less privileged.

As Muslims have been more visible in the public sphere, their religious and cultural sensitivities should also be respected and tolerated to avoid cultural clashes in Europe, rather than oppressing them. Lastly, tackling the problem of radicalization requires a multi-faceted approach for its solution to be the most efficient and the most inclusive in the long run.