PKK: Hands off our heritage 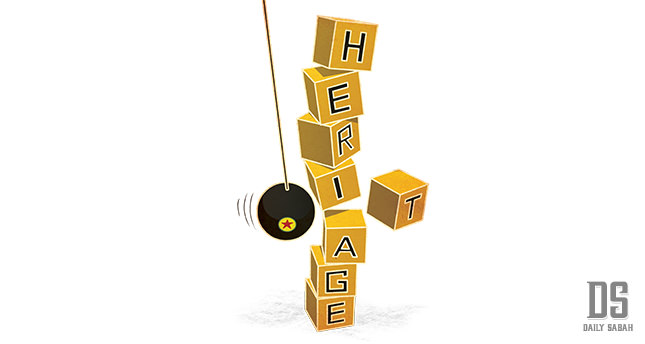 The PKK is sadly destroying values common to the world, by demolishing historical structures and the streets in Turkey's southeast, the cradle of civilizations

Mesopotamia has been the cradle of many civilizations such as the Sumerians, Acadians, Babylonians, Assyrians, Semites, Romans, Byzantines, Seljuks and Ottomans for a millennia and harbors the cultural heritage of the entire world. The city of Diyarbakır is home to invaluable historical heritage from this multicultural history of civilizations, and there are ancient ruins in its city center. Various cultural structures ranging from the Virgin Mary Ancient Assyrian Church to the Grand Mosque in the Diyarbakır Citadel.

This cultural site has been occupied by the people who fled their homes in the rural towns which include Lice, Dicle, Kulp, Silvan and other surrounding provinces amid the rise of PKK terror in the 1990s. Inadequate substructures and the reluctance of municipal officials to address the issue turned the area into a slum. The narrow-minded, low-educated, impoverished new residents of the Citadel became the targets of intense PKK propaganda and provocation in the past two decades. Now, under the influence of the Syrian civil war, the PKK extended its violent campaign from the rural areas to urban centers like Diyarbakır, turning the historical site of the Citadel into a PKK post aimed at attacking local law enforcement.

THE MEGALI IDEA THIS TIME FOR SOUTHEASTERN TURKEY

Claiming to have gained public ground among Citadel residents – either by brute force, intimidation or coercion, the PKK has insisted that the urban fight in the city center emerged as a reflex response by the region's youth reacting negatively to governmental policy. After the June 7 general elections, masked young people – ages 15 to 20-something --brought AK-47s to the streets and began digging trenches and erecting barricades in the streets of the Citadel. Indeed, the young people who started this so-called civil disobedience were the frontier actors for the PKK's urban warfare strategy, which was intentionally designed using the experience gained during the ongoing Syrian civil war. Behind the young people with limited military training were the PKK's cell cadres who were experienced in fighting in rural areas of Turkey and urban centers in Syria, particularly in northern Syrian, which is called "Rojava" in Kurdish. these cell cadres were responsible for the recruitment of young people via civil organizations, training them at rural base camps around the city of Lice, that symbolizes the establishment of the PKK in the late 1970s, and sending some of them into Syria to gain urban combat experience before organizing and arming them to conduct urban warfare against Turkish security forces.

Contrary to the PKK's expectations, the fight in the urban areas did not evolve into a civil war, but, rather, alienated the locals, depriving them of basic services such as power, water and sewage along with economic assets and a daily routine, igniting critical public reaction against the group. Local people became the targets of terror; their homes were occupied by the terrorists and used as posts to stage counterattacks against the security forces. Some were even forced to serve in the urban militia and some family members were killed in armed conflict to make it appear as if the security forces were responsible. During this course of action, the PKK reinforced its armed elements with more experienced fighters and took over the fight from the manipulated young people in the Patriotic Revolutionary Youth Movement (YDG-H). The PKK's armed elements; namely, the People's Defense Forces- (HPG), oriented Civil Defense Unit (YPS) forces which carried out relentless attacks on civilians and security forces – roads were blocked, vehicles were set on fire, local political figures were kidnapped, power lines were destroyed, GSM base stations were damaged and construction sites for new roads, dams and other aquatic projects were also targeted. The PKK's atrocities spilled into urban life, resulting in immense humanitarian, political and economic costs for the people of Diyarbakır. Hundreds of people, including civilians, security personnel and terrorists, have been killed in the last two months. Thousands of people had to flee their homes and neighborhoods. Schools were set on fire and students are unable to attend school. Businesses are closing, causing unemployment to rise.

The PKK not only attacked civilians, but government officials and security personnel as well, who were either harassed, kidnapped, assassinated or came under direct armed attack and the threat of improvised explosive devices. In response to the PKK's confrontation in urban centers, the Turkish government has initiated a simultaneous, indignant counterterror operation in some urban centers and is expected to realize its goal very soon. Problematic neighborhoods were contained, curfews were imposed, the majority of civilians were evacuated and terrorists were disengaged. While an estimated 400 PKK fighters, both experienced rural PKK fighters and agitated youths, were presumed responsible for the terrors attacks in the Citadel area of Diyarbakır. Many deceived young people had to flee the conflict zone, leaving the fight to PKK cadres. As of Jan. 29, 144 PKK terrorists were killed and 30 more are presumed perpetrators of ongoing attacks. More than 250 inexperienced fighters are thought to have fled the site among civilians as they were being evacuated. More importantly, the PKK is using child soldiers, forcing them to carry strategic messages to other terrorists in the conflict zone.

Amid the recent atrocities, the PKK is assumed by many locals not to be a representative of the people, but a deceptive organization. Even though it is common knowledge that the PKK runs on hatred and violence, people are intimidated to the point of silence, refusing to voice their criticism of the terror organization. Hatred and violence are two vital components, both vying for the PKK's cycle of survival. Indoctrinating children with a mentality of hatred is one of the ruthless methods that PKK-affiliated associations and nongovernmental organizations (NGOs) frequently apply. Below is a simple example of how the PKK roots hatred in the minds of young children.

The Tigris Euphrates Culture and Art Association was founded on April 13, 2003 and took its name from the two famous rivers, attributing the meaning of "rebellious" to the Euphrates and "free" to the Tigris. Symbolizing violence and enmity with these local rivers, the association has organized and performed folkloric and artistic activities under the names of folk dance, theater, painting, photography, music and so on. It recently organized an activity to bring school children to draw pictures of curfews and urban damage in the Citadel area, calling the areas besieged. These children are 7 to 10 years old from the İskenderpaşa district of Sur, which is near the conflict zone. Instead of giving hope for the future, these children are inured with hatred by being encouraged to draw pictures of abstract, anti-government concepts created in their minds to be potential PKK fighters in the future. More to the point, the PKK strategically uses civil society organizations as the main facilitator to shape radical tendencies in youth by framing all these activities in terms of democracy.

Associations such as the Mesopotamia Youth Research Center Association (MEGAM-DER) in downtown Diyarbakır are hubs to organize older children to turn to violent actions. MEGAM-DER organized a picnic in the vicinity of the village of Yolçatı in Lice on April 23, 2014. High school students aged around 15 were taken to a rural area where the PKK's rural activities are rather common and they were encouraged to protest the ongoing building efforts of a gendarmerie post in the vicinity. Later on, these children were accompanied by female PKK terrorists and some of them were taken to a nearby rural PKK base camp. Among those taken to the training camp were Halime Gündüz and Fırat Aydın Eren. After figuring out that their children were being recruited by PKK, the Gündüz and Eren families claimed their children from the PKK. Families found no people to address at MEGAM-DER, the pro-PKK Peoples' Democratic Party (HDP) or the PKK itself regarding their children's return. Almost one month later, on May 19, 2014, families started a vigil in front of the HDP-run Diyarbakır Municipality and were accompanied by other families. Some of the children, including Halime and Fırat, were released by the PKK due to public pressure, but the PKK's radicalization efforts have not stopped since then.

The PKK claims the two important points of heritage are history and children. Both struggle to coexist under PKK manipulation, agitation and psychological and physical damage. Government investments, together with local, national and international contributions for recovering children, and seizing historical sites from the PKK are the only ways to bring real peace, welfare and stability to the southeast. Ankara's master plan for how to end the urban fights should provide a platform for local people to state their stance against the PKK. There is no doubt that the peace initiative is necessary in publically debatable terms and conditions.